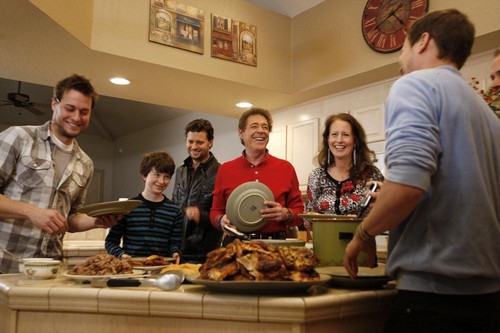 On the last episode Comedian Judy Gold lives in New York City with her fiancée Elysa and two sons Henry and Ben. The family lives in a cramped Manhattan apartment where they keep an open door policy with many of the boys’ friends stopping by despite the fact Judy utilizes part of the living room as her home office, making it difficult for her to focus on the work she needs to do. Magician Penn Jillette is one-half of the famed stage duo Penn and Teller. He lives in Las Vegas, NV with his wife Emily and their two children Zolten and Moxie. The family resides on a secluded and expansive piece of land in the Nevada desert that they’ve named “The Slammer” and the families swap lives. Did you watch the last episode? If you missed it we have a full and detailed recap, right here for you.

On tonight’s episode, Joe Piscopo is a comedian best known for his legendary impersonations while a cast member of the long-running television series “Saturday Night Live.” Joe resides right outside New York City with two of his children, Michael and Olivia. Barry Williams is a familiar face to generations of television viewers for playing the role of Greg Brady on the iconic television series, “The Brady Bunch.” Today, Greg lives in Branson, MO where he performs in “The ‘70’s Music Celebration.” Barry has one son, Brandon, who lives part time with him. Barry’s right-hand woman is Marie who oversees the running of Barry’s stage performance each and every evening. From the wardrobe and props to music and choreography, Marie is on top of it all, but her job duties end there.

We will be covering tonight’s Celebrity Wife Swap, Joe Piscopo and Barry Williams episode with all the details. You don’t want to miss this episode; you never know what craziness is going to break out! Don’t forget to come back to this spot at 8PM for our coverage of the episode.

Tonight’s celebrity wife swap features two single fathers that will switch places. Barry Williams is raising his son Brandon in between doing a Brady Bunch type stage show. Marie Haygood is like Barry’s stage mother and she helps him to raise Brandon. Joe Piscopo is the other celeb trading places tonight. He is best known for Saturday Night Live and now hosts a radio show. He is a single father to five kids and Michael and Olivia live with him. His personal assistant Jessica functions like his kinda sort of wife, without a ring or license.

The ladies arrive at their new homes and have quite different reactions. Marie loves Joe’s house and Jessica can’t get over the cheesiness of Barry’s house. Marie’s first impression of Joe is good. She thinks that he seems like a nice guy. Unfortunately when Barry meets Jessica he’s over thinking her opinion of him and how stunned she must be to be in the presence of Greg Brady. Um, ok maybe he needs to get over himself.

Joe’s house hold may lack structure but it still seems to run better than anything that Barry has going on. Barry is trying to rehearse for his 70’s show and he nitpicks at Jessica over everything and really proves to be an annoying guy. He quickly replaces Jessica with a real personal assistant because he’s incapable of doing anything for himself. Meanwhile Marie is psychoanalyzing Joe and figures out that he is still in love with Jessica.

Jessica thinks that Brandon desperately needs a friend rather than to keep existing like a little adult. I have a feeling that once she’s in control he will be playing outside and acting like a normal kid rather than Barry’s serious side kick.

After a few days of following the house rules it’s time for the ladies to take over. Jessica wants Brandon to be a kid for awhile and Barry’s first reaction is to ask how his show will be on time then. Obviously his kid is part of his business. Joe’s house is totally different and the biggest issue for Marie will likely be getting the family to be a bit more structured.

On “Brandon Day” he starts off with a personal magic show and then moves onto the race track for some fun. Meanwhile Joe’s kids are happy just to have dinner together, at the dinner table. After Brandon Day Jessica talks to Barry about his life and he admits that he wants his son to have a real childhood, unlike himself. She tells him that she thinks that Barry has done a good job.

Marie believes that in order for Joe to get over Jessica he needs to set up an online dating profile. He’s not really agreeing to it but he is starting to think that he might be better off without Jessica. Both couples head to the place where they’ll sit down at the roundtable and talk. Jessica sits down and is very outspoken. She mentions that Barry’s home reminds her of a grandmothers and then she moves onto him needing Brandon to be a child. She also calls him on disrespecting her for not having his show ready for him. Meanwhile Marie corners Jessica on her feelings for Joe and then tells her that she helped Joe create a dating profile. This sits really badly with Jessica and she tears into both of them, suggesting that they date each other. While sitting at the round table Joe tells her it’s over. He tells her it’s time to part ways and Jessica punches him in the face. It’s now obvious that he used her and promised her a real relationship that he never delivered on.

Fast forward a few weeks and Brandon is now playing with other kids more often while Barry is more self sufficient. As for Joe and Jessica- they made up!