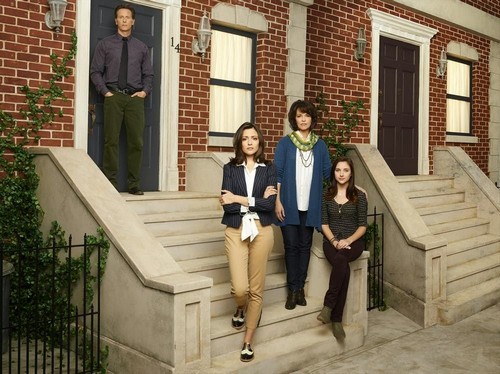 Chasing Life comes to ABC Family tonight for its season premiere. Tonight’s episode is called “Pilot” and on tonight’s episode April gets a chance to impress her boss and her office romance begins to prosper, and then she receives unexpected news: She’s been diagnosed with cancer.

For those who are not familiar with the show, the series follows April through her journey in the face of this daunting revelation, during a time in her life when the challenges of finding love and success would be enough to keep any girl occupied. But April is determined to fight and refuses to give up her dreams and goals. Along the way, she’ll find new reserves of strength and passion within and discover that facing death may really be the only way to truly live.

On tonight’s episode in the series premiere of this drama about an ambitious reporter who won’t give up on her dreams, April gets a chance to impress her boss and her office romance begins to prosper, and then she receives unexpected news: She’s been diagnosed with cancer.

The season premiere of CHASING LIFE is going to be really exciting and we’ll be recapping it for you right here. In the meantime hit up the comments and tell us your thoughts about the show!

A young and aspiring journalist talked her way into a blood drive in order to grill one of the celebrity volunteers. However, for all her spunk, he quickly picked up on her real motive and let’s just say he doesn’t like the press. And he would have walked away right then and there (who knows, maybe in a huff) if April hadn’t passed out right in front of him.

April is just breaking into this field and she needed that interview badly. So after she woke up in a hospital bed and found him standing vigil — she decided to use the opportunity God presented to her. Hence her guilt-tripping him into giving her an interview and when she returned to work — her boss looked at her with new respect.

Only six months into the job and she nabs a celebrity must-have. Her boss is impressed while her co-workers on the other hand are slightly bitter. Danny even asked her if she slept with her interviewee. He could have been joking, but probably not. Though, April didn’t appear to be offended.

And truly why should she be? Her life is going well. She finally got asked out by her crush at work and her mom is thinking about going back out on the dating market. So, for now, all the corners of her life is getting settled nicely.

Then, she got the news!

The doctor that checked her out at the hospital was none other than her estranged uncle and he kept trying to call her after she checked out. But she didn’t want to take his calls so he was pushed into cornering her in front of her house. He took such drastic measures because he wanted to tell her that he ran some tests back at the hospital and the blood work came back abnormally — it seems that April has cancer. Leukemia.

She promised to follow up, but April’s biggest concern is no one else finding out about this. She doesn’t want to put any pressure on her single mother, troubled sister, cranky grandmother, or worse, have her job find out. Her boss isn’t known for his sensitivity and the people she works with would easily stab her in the back to get ahead.

Uncle George refuses to be fobbed off. When April didn’t attend her follow-up, he went to her work to track her down. April didn’t want anyone to overhear so she talked to him in the stairwell and her crush ended up overhearing George telling her he still loves her and wants the best for her. Dominic took that to mean that George was her ex and then went about ignoring April for the rest of the day. He didn’t want to be in a competition with a much older and possibly married man.

For a life that was finally becoming good — it all unraveled fairly fast. April lost a hot guy and her sister relapsed into old and abusive patterns. Brenna is back with an old boyfriend of hers and even though her sister warned her about him — she can’t stay away. Sadly, April remains clueless and so does their mother.

Because, you see, Sara was busy getting ready for her date and that must be why she never questioned where her youngest was or why April had called in the middle of day asking for some time to talk. By time April came home, she didn’t have it in her to ruin her mom’s date.

Instead, April went out. A girlfriend called her up to hang out and when she got to the club she saw Dominic. April wanted to leave after spotting him, but her friend stepped in and told her to be brave. So she confronted Dominic. He’s been ignoring her and it’s only fair that she learns why.

He told her about the scene with George and how it looked to an outsider. And she assured him that she was in fact not sleeping with her uncle.

They were about to get back on good terms again when her sister called asking for help. Brenna’s boyfriend had abandoned her drunk at a party and she needed her sister to come and rescue her without their mom knowing. So April did and because their mom thought she was watching her sister the whole time – the older woman had the nerve to say thank you when she came back home.

Her mom is happy and her sister got away with her usual antics. It’s the same old story for them and just a different day. And they’ll continue to do this believing April will always be there to silently clean up after them.

Though, what if she isn’t. April doesn’t tell anyone about her cancer. Well, not anyone living anyways. The only person that allowed her to get a word in was her dearly departed father. April visited his grave to tell him she might be seeing him soon and took some comfort in finally saying “I have cancer” out loud. But the moment was soon ruined when she noticed that the young woman she ran into while leaving, the one that said she was visiting her father, stopped to lay roses on April’s dad’s grave!

Does she have a sister she doesn’t know about?