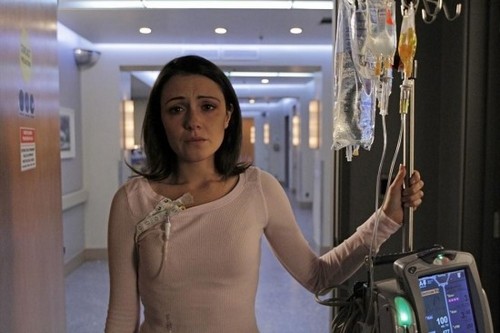 Chasing Life comes to ABC Family tonight for the midseason finale episode of season 1. Tonight’s episode is called “Finding Chemo” and on tonight’s episode April starts her treatments, but she begins to panic as the chemo and hospital confinement take their toll on her, so she reaches out to someone unexpected. Meanwhile, Dominic finds a changed April when he returns.

On the last episode April prepared for her first chemo treatment and a hospital stayed by trying to enjoy a few ordinary days, but that doesn’t work out thanks to drama from Leo, Beth and Sara. Elsewhere, Brenna attempted to make time for both Kieran and Greer.

On tonight’s episode April begins her battle and month-long hospital stay with mixed emotions. Her resolve to fight starts to wane as her treatments take a toll. Not sure she can be cooped up in the hospital for much longer, April begins to panic. With her family by her side, April makes a surprising outreach to someone who may be the only person who can help her.

It’s time for April to start her chemo. And although she thought she was fully prepared for it – the reality of being hooked up every which end is daunting. So she tries to look on the bright side and her sister even tries to help with that regard. But, as they tend to do, things go downhill after day 1.

Her uncle George keeps stepping on her doctor’s toes what with comforting his niece and advising her in a professional capacity. Also her sister couldn’t stay long. Brenna still has school and though her family wants to pretend she can go back to being a normal teenager – that’s not exactly possible. Her sister’s experiences have changed her and Brenna is growing up faster than she should have. While at the same time her newfound maturity is long overdue.

She dropped Ford when she realized how shallow her friend was.

And speaking of shallow. Apparently, Dominic was never that superficial. He came back as soon as he heard April was sick and it looks like he wants to be there to support her through this time. But he was also slightly offended that April hadn’t trusted him with her secret. He told her he would have been there for her no matter what.

So that begs the question – is she going to tell him about Leo? She and Dominic were on a break and according to Beth they’re still kind of are. That’s why Beth told her not to say anything. Hearing about another guy after he flew back a thousand of miles to be there for her – is going to sting. There’s no way around that!

Brenna found herself in hot water at school. Her principle had found out that she and Greer snuck away on their eco-trip. So Brenna was then told she had to come clean with her mother. She wanted to be calm about it yet when her mother started to lose her temper Brenna decided to settle the issue once and for all with her mother by putting a positive spin on her trip.

There’s a chance for them to save April and it would really be better if everyone put their petty grievances aside. And that includes Dominic. It hurt that April hadn’t told him about her cancer when they were together. Though nothing compared to seeing her with Leo. He was angry that she turned to someone else and without having being told about their sexual relationship – he realized for himself that there was more to April and Leo’s relationship than she was letting on. So he walked away. Dominic was smart enough to know that he didn’t want to play second fiddle to another guy.

And before she could start pitying herself about whether or not anyone is going to fight for her (Dominic couldn’t take the competition and Leo wanted to foolishly die on his own terms rather than a hospital’s) – she got a weird message from Leo. He said he had something very important to tell her and with his parents at the hospital the rest of his message could only be about two things. Either something went wrong or things are about to get really good.

Then there’s Brenna’s love life or the lack there of. Brenna and her mother later had to report to school for her ditching her field trip, but by time they got there – the problem had already been “fixed”. Greer’s parents paid off the school with a new building and in return all they wanted was for the girls’ records to be expunged and for Brenna to stay away from their daughter. They believe her to be a bad influence so she’s been told in no uncertain terms that her relationship with Greer is over.

Sara’s budding relationship with George seems to be the only one that’s going strength for strength in the Carver household. So isn’t odd that no one else knows about it?