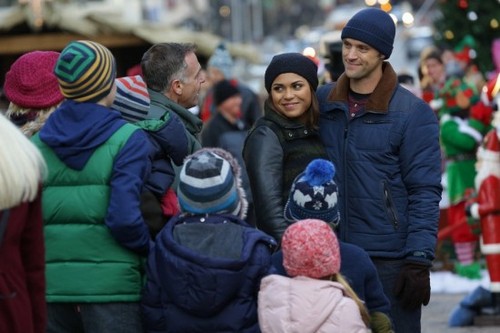 Tonight on NBC Chicago Fire continues with an all new Tuesday, December 2, season 3 episode 10 called, “Santa Bites,” and we have your weekly recap below. On tonight’s episode, a couple get trapped in a house fire, leading to a perplexing aftermath. Meanwhile, Chief Boden prepares to start his new family; the stresses of life and work push Casey [Jesse Spencer] and Dawson [Monica Raymund] apart; and Molly’s II gets an opportunity to shine at a holiday fest.

On the last episode, when the team responded to a semi-truck leaking hydrochloric acid in a busy intersection, Casey (Jesse Spencer) and Dawson (Monica Raymund) found their relationship being put to the test. Meanwhile, Severide (Taylor Kinney) learned more about Brittany’s (guest star Serinda Swan) past and Mouch (Christian Stolte) had some difficulties in his dating life. Did you watch the last episode? If you missed it, we have a full and detailed recap right here for you.

On tonight’s episode as per the NBC synopsis, “a house fire leads members of the truck and squad to race to save the lives of the couple trapped inside, and then are faced with the perplexing aftermath. Meanwhile, Chief Boden (Eamonn Walker) prepares to start his new family, while the combination of life at work and home pushes Casey (Jesse Spencer) and Dawson (Monica Raymund) apart. Elsewhere Molly’s II has its chance to shine at the Chicago Holiday Fest.”

Tonight’s season 3 episode 10 looks like it is going to be great and you won’t want to miss it, so be sure to tune in for our live coverage of NBC’s Chicago Fire.

Tonight’s episode of Chicago Fire with Peter Mills arriving at the fire house, the man who’s son drown last week, Anthony Lulo, is waiting him – he apologizes for freaking out on him and threatening him and says he doesn’t blame him for his son’s death.  Casey arrives and Mills tells him that he isn’t trying to get in the middle of his issues with him and Dawson.  Casey heads to the locker room and Dawson tries to talk to him about their fight, but he ignores her.

Boden calls Casey and Kelly in to his office, he tells them that Donna could go in to labor at any time and he wants them to know that he may be leaving in a hurry and he might not be able to get another chief in for a while.  They reassure him that they will have everything under control if the baby comes and he has to leave.

A call comes in for an apartment fire, and they head to the building to put it out.  When they arrive there is a man yelling for help from the top floor window.  He dives on to the ladder and nearly knocks Kelly over, he says that his wife is still inside and in the bathroom and Kelly runs through the flames and tries to find her.  Casey follows him and tells him that the fire is too much and they have to pull out – they leave without recovering the man’s wife.

As Kelly is about to climb back out the window he sees the woman and runs back inside.  They drag her to the open window and carry her down to Sylvie and Mills.  Sherman is disgusted with the woman’s husband, because he didn’t even try to save her and dove out the window nearly taking out their men in the process.

They head back to the fire hall where  Chaplin is waiting for them, he takes Sherman’s boot and tells everyone he wants it filled.  The soup kitchen where he works has a broken stove and they can’t serve people for the holidays.  They all reassure him that they will make sure they raise the money.  Before Chaplin leaves he corners Dawson and gushes to her about how proud he is.

In the lounge the turn on the TV and the husband that just dove out the window is being interviewed by the news and bragging about how he is a hero and saved his wife.  Mouch and Cruz are flabbergasted and think they should calls the news station and tell them what really happened, Kelly advises against it.

Donna visits Boden in his office, and she wants the baby to have both of their last names.  Boden shoots her down and says there is no way that is going to fly and “tradition still means something.”  Donna is not happy and says she has to go.  Mills stops by Boden’s office and tells him that he talked to Anthony Lulo and he apologized and he trust him – he doesn’t think that he is dangerous, he thinks that he was just grieving.

The man who jumped out of his window, Fred Carlisle, stops by the firehouse and thanks them for saving him and his wife.  He knows that they think he is horrible for leaving his wife to die in the house, he pulls up his shirt and shows them a massive scar on half his body – he reveals that he was burned badly in an explosion when he was a teen and when the fire started he just panicked and jumped out the window.  Kelly comforts him and then scolds the rest of the crew when he leaves for being so harsh on him.

Casey corners Kelly and asks him what he is doing after work – Kelly is tired, but Casey convinces him to go out for a drink at the bar.  After a night of wild partying Casey wakes up the next morning on someone’s couch – a woman in a towel walks out in front of him, he is completely confused.

It’s time for the holiday parade and the Molly’s truck debut – Casey shows up late and hugs Dawson and apologizes, he reassures her they are going to work their differences out.  Herman scores an interview with the local reporter and while they are filming his Molly’s truck it rolls away and destroys the nativity scene and several other displays.

Casey corners Kelly in the bathroom and tries to find out what happened the night before.  Kelly explains that they went to the girl’s apartment so that Casey could charge his phone and he fell asleep on the couch while Kelly was hooking up with her.  In the morning Casey was still passed out so Kelly just left him there.

Mills and Sylvie receive a call and they head to the scene, they find a man writhing in pain in the alley and realize that while he was sleeping – a garbage truck ran over his legs.  The man passes out from blood loss and they load him on the stretcher and prepare to put him in the ambulance.

Kelly is called to head back to the Carlisle house to see if the building should be condemned, while he is walking through he realizes that the fire started in three different places – and is convinced it was the husband.  Kelly calls the police and they head to the hospital to arrest him.

At the fire house they realize that no one has heard from Sylvie or mills in a while.  Chloe, the woman whose house Casey slept at shows up and gives Dawson his phone because he left it at her apartment.  Dawson freaks out on Casey and he tells her that their relationship isn’t working because she doesn’t respect him.

Donna shows up at the fire station livid, and starts yelling at Boden about their son’s name.  Donna goes in to labor, but no one is there to help because Sylvie and Mills are missing and Dawson left early.  They all load her in to a fire truck and rush her to the hospital.  But, there is a traffic jam on the bridge – while Kelly is honking the horn Donna scrams that the baby is coming now.  They have no choice but to deliver the baby in the truck.  The baby is born and appears healthy and begins crying, Boden wraps him up and gives him to Donna to hold.  They finally arrive at the hospital – and the baby stops breathing and is rushed away by the doctors.

Casey still can’t find Sylvie and Mills – so they head to the last scene that they were called to.  They arrive in the alley where the man was run over by the garbage truck and find him still lying on the stretcher – the ambulance appears abandoned.