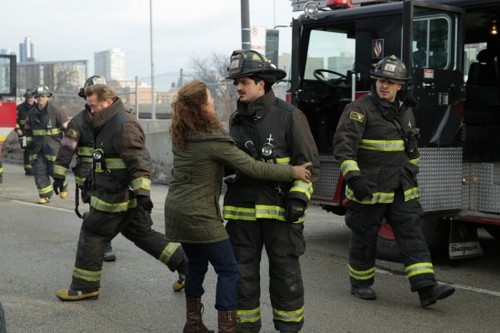 Tonight on NBC their new drama CHICAGO FIRE continues with a new episode called, “Virgin Skin.”  On tonight’s episode Casey (Jesse Spencer) learns more about his head injuries after another close call and Dawson (Monica Raymund) pushes hard to pass the physical test at the Academy.

On last week’s episode When a drunk driver knocked down a transformer, the entire neighborhood was left without power on a frigid Chicago night and members of Firehouse 51 stepped up to lend their much needed help. While many from the community ride out the night at the station, in the midst of such close quarters, romances speed up and tempers flare. Meanwhile, Casey continued to lie to both himself and Dawson about his condition and the stakeholders in Molly’s bicker about the bar’s direction.

Tonight’s episode looks like it is going to be great and you won’t want to miss it, so be sure to tune in for our live coverage of NBC’s Chicago Fire at 10:00 PM EST! While you wait for our recap hit the comments and let us know what you think of Nashville, so far?  Check out the sneak peek of tonight’s episode below!

Severide tried to go the normal route. He honestly believed that if he put enough trust in the police and in Detective Lindsay that his sister would soon be found. But then it started to take longer than he thought. Possibly too long for a guy wanting to help find his sister on his own anyway. He tried the legal way and then he decided to use his own methods.

After seeing Keeler leave the police department unencumbered yet again; he chose to act. He got the time off from his Chief and then started to work his way through Keeler’s “friends”. Like Tommy who helped lead him to the next guy. He threatened here and nearly maimed there. And in the end it got him what he needed. Severide found where Katie was and immediately called in Lindsey.

Katie was hurt during her time by Keeler and his men. She wouldn’t say how hurt in front of her brother but according to Lindsey it was something really bad.

Otis was one of the first people to arrive at the hospital and yet he couldn’t bring himself to go in and see Katie. Since she’s been missing he has done nothing but drag himself over the coals. Never mind the logic of how could he fight off two guys; all he can think about is If only he had been with her.

Although in the longer run he does caves. He went out on an emergency call and almost got burned alive helping a victim. Afterwards nothing matter to more than to see Katie.

His head wasn’t in his job and neither has Casey’s. He found out from his doctor that due to his cracked skull that he shouldn’t be taking risks. Such as those he does on a regular basis for her job. Even knowing what his doctor said he then went out to go on call. And what did he get for his troubles? He nearly fell off of a conveyor belt several feet above ground. If he was in tip top shape the fall would have possibly resulted in a sprain but he’s not in the best condition and that fall could have killed him.

Dawson has been struggling with her field test. She hasn’t done so well in practice and afraid that it’s going to cost her whole training. Then to top it off she has to see Jones doing well and hear from others how much Jones is doing well. Dawson had told the other woman that she wasn’t going to narc on her but a cheat surpassing her is starting to rub her the wrong way.

Casey tries to help and he can’t. So he goes to the newly returned Severide. He asked him to look out for Dawson and in returned got reassured. Severide said Dawson is tough and that he was sure she could was going to just fine during the real test. She doesn’t and it’s through no fault of her own. Dawson had hurt her foot by stopping to help Jones complete the run. She helped and then when she was impeded no one helped her.

Though Jones isn’t as bad as Dawson originally thought she was. Sure, she does what she can to get ahead but she has something to prove. And Dawson can see that for herself when she meets Jones’s father. The older man is an old fashioned sexist. He just naturally assumed his daughter would fail and was waiting for it to happen. That’s why Dawson made sure she passed.

Still she and Dawson won’t be making BFF beads. Particularly after Dawson heard Jones was going to riding along with the 51.

That’s what you get when do someone a favor. Shay and Rafferty were called out to an incident at an office. There they ran into a man about die but refusing treatment. The man, Jacob, didn’t want to be treated because of religious reasons. Yet Rafferty didn’t want to let up. She told him to nod if he wanted treatment and then took his body going into shock as consent. Shay tried to stop her.

Later the guy comes to and claims that Rafferty treated him against his will. Shay had only heard about getting good news. Clarke took some of the buddies to the bar and as a tip they left her tickets to this big playoff games worth around eight hundred dollars apiece. But how can she get excited about a new pair of Jimmy Shoo with litigation hanging over her friend’s head.

A few months suspension for saving someone’s life doesn’t make sense to them.

Lindsey was able to find Keeler and finally bring him to justice. And though that was all very nice it still didn’t change Katie’s decision. She’s going to go away for a while and stay with her mother. She made that choice because it was hard for her even thinking about staying around. So Katie is going and she asked her brother to tell Otis for her.

The chief might have lost out of having Donna because of his own commitmet issues but otherwise things were beginning to look bright again. The squad rebuilt a school’s library (Shay had used her tickets as a raffle); Herrmann surprisingly passed his tests after he hid the scores for hours, and Clarke’s friends came through for the squad once again. Then Severide heard from Lindsey – whoever Keeler’s friends are they must be in a high position. He was let go!