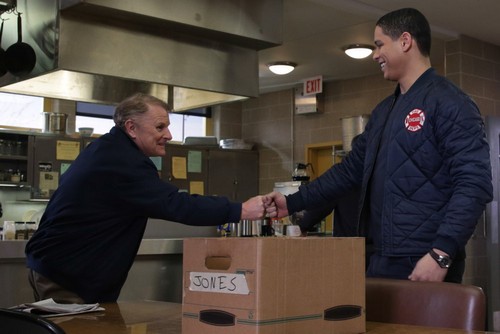 CHICAGO FIRE returns to NBC tonight for another episode that will keep you on the edge of your seat. In “A Heavy Weight, ”  As the firehouse staff deals with a tragedy, Dawson receives a suicide note and Severide looks into Bloom’s past. Meanwhile, Chief Boden receives distressing news and asks Shay for help finding a crucial item.

On last week’s episode Lt. Severide (Taylor Kinney) stuck his neck out for Dave Bloom (guest star W. Earl Brown), a fellow firefighter from Denver who was troubled by addiction. Elsewhere, Dawson (Monica Raymund) and Shay (Lauren German) left town for a “girl’s weekend” at a cabin in the woods. Meanwhile Jones (guest star Daisy Betts) struggled with the knowledge that her father was pressuring Chief Boden (Eamonn Walker) about her career path and Mouch’s (Christian Stolte) internet dating profile got an upgrade with the help of Mills (Charlie Barnett) and the guys. Jesse Spencer, David Eigenberg, Yuri Sardarov and Joe Minoso also star.

In the aftermath of Jones’s suicide, no one is more lost than Mills. He’s going over events and blaming himself for not stopping Jones. While on the other end of the grief spectrum there’s Casey. He’s choosing to act rashly instead of taking the necessary time to grieve properly – he went out and bought a ring for Dawson.

But Dawson won’t exactly be in the mood to hear a proposal. The suicide letter Jones has left behind for her was finally found. And now Dawson is afraid to read it.

Severide tried to take his mind off Jones’s death by cheering up the guys with a visit to Bloom’s room. Yet imagine his surprise when he learned his erstwhile friend had signed himself out of rehab.

It seems that Bloom barely lasted 12 hours in the 28 day program. Although Severide still refuses to give up on this obvious lost cause. Once he heard how Bloom hurt his back – by trying to stop his other brethren from getting hurt – it became even more important than ever to help this man.

Severide was unable to be there for Jones, but he’s not going to make the same mistake with Bloom.

The other guys have returned to business like nothing big happened. Even after Herrmann told everyone about Jones’s visit to the bar. He mentioned how she was looking for Dawson and left out the heart to heart he had with her. So when he continues to joke around with the guys – Mills ends up getting offended. To him, it looks like the guys don’t care. Like they don’t owe a dead girl anything.

Dawson is showing more emotions than the people that actually worked alongside Jones. At least she’s mad at Jones’s father. So why isn’t anyone else?

Mills struggled to broach Jones’s death with the guys. He wanted to honor her memory and told the guys it was the least they could do, but Hermann reacted as if he was being accused of pushing Jones too far.

Mills had stepped away for the sake of their friendship yet what was that? Hermann overreacted and deep down that could be because he knows that Mills might have a point. Why can’t Jones be remembered fondly? It isn’t like she didn’t try to fit in. Though guys all tried to discourage her.

Are they being cold because they each blame themselves?

Chief Wallace asked to see Dawson. He wanted to know if she was still up to retaking her firefighter’s exam. She said yes and the Chief was glad to hear it. He was willing to give her a recommendation, but Dawson was surprised to hear that she wasn’t going to be working at the same station even if she passed her test. The Chief had said it wouldn’t be appropriate what with her relationship with Casey.

Clarke returned with news of his position. He’s been a made a lieutenant at his newest firehouse. That’s why he was scared about returning to 51. But he came back when he heard about Jones. He’s currently working with her brother and he just wanted to share his condolences when Dawson went off.

She wanted to know what was going to happen to Chief Jones. Was he going to be punished for his part in his daughter’s suicide and she was told that no he wasn’t. He is a Chief after all.

So when no one was looking, Dawson took Jones’s stuff to her father. She wanted to use that opportunity to make him feel bad about himself, but she was much too late for that. Chief Jones was already broken man when she arrived. His attempts at keeping his daughter safe had led to this. So Dawson left him to his grief and she kept her opinions to herself.

The firehouse was called out for a prom night disaster. A bus was hit and there was one partygoer missing. Chief Wallace wanted to shut down the highway to find her, but the sheriff on the scene didn’t want the fuss. He threatened the Chief with an arrest if the firefighters closed off the highway .They ended up doing so anyways and the sheriff followed through on his threats.

Though they soon found the teenager girl that was thrown from the bus and that got the Sheriff to back off. He couldn’t risk arresting someone for saving a young girl’s life.

When the guys got back to the station, the fight between Mills and Hermann finally boiled over. Hermann had wanted an apology. He was actually demanding it when Mills told everyone angrily that Hermann was refusing to admit the part he played in Jones’s death.

Hermann didn’t need to be reminded about his part though. He was the last person to see Jones alive and he blames himself for not stopping her from doing what she did. That’s why he couldn’t take anyone else blaming him. He only wishes he could have done something different.

Later, Hermann was the only person that showed up to bowl with Mills in honor of Jones. And he did that because he knew that her life was important, but he was afraid to mourn her until then.

The resident shrink was in house all day to help with the Jones’ situation and yet what he did was help Chief Wallace and Severide. He helped Severide get through to Bloom. He did this by bringing a couple of guys from Bloom’s old squad.

The men under his care had initially resented him because he had said their lives at the risk of his other firefighters. But they’ve come to realize how much he sacrificed for them and so they came all the way out to Chicago to convince to get help. Bloom was once a great man and he shouldn’t let his actions – that saved people – haunt him.

And as for Wallace, he needed to let go of his guilt towards Henry Mills. He had to stop taking these types of situations to heart. And so he felt like he needed to talk – he reached out to Donna.

What was in the letter for Dawson? Don’t worry it wasn’t anything bad. Jones had only told to never let anything stand in her way. Well, Dawson wants to work at 51 so he’s more in her way now: Casey or the Chief?