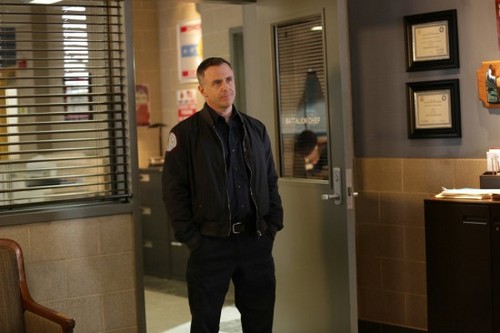 CHICAGO FIRE returns to NBC tonight for another episode that will keep you on the edge of your seat. In “Until Your Feet Leave the Ground, ” Severide reaches out to a Denver firefighter who’s battling an addiction. Meanwhile, Dawson and Shay enjoy a girls’ weekend away; Jones learns that her father is putting pressure on Boden about her career; and Mills helps Mouch upgrade his online-dating profile.

On last week’s episode Lt. Severide (Taylor Kinney) hit the top of the list as Det. Lindsay (guest star Sophia Bush) started calling in suspects with the clearest motives to make the guy who kidnapped Katie disappear. Meanwhile, Jones (guest star Daisy Betts) was still having trouble fitting in as word of her disruptions reached the fire department’s headquarters. Elsewhere, Herrmann (David Eigenberg) celebrated his twentieth anniversary with his wife, but no one supported his idea on the gift he intended to give.  Did you watch last week’s episode? If not then we have a detailed recap of it for you here.

On tonight’s episode Lt. Severide (Taylor Kinney) sticks his neck out for Dave Bloom (guest star W. Earl Brown), a fellow firefighter from Denver who is troubled by addiction. Elsewhere, Dawson (Monica Raymund) and Shay (Lauren German) leave town for a “girl’s weekend” at a cabin in the woods. Meanwhile Jones (guest star Daisy Betts) struggles with the knowledge that her father is pressuring Chief Boden (Eamonn Walker) about her career path and Mouch’s (Christian Stolte) internet dating profile gets an upgrade with the help of Mills (Charlie Barnett) and the guys. Jesse Spencer, David Eigenberg, Yuri Sardarov and Joe Minoso also star.