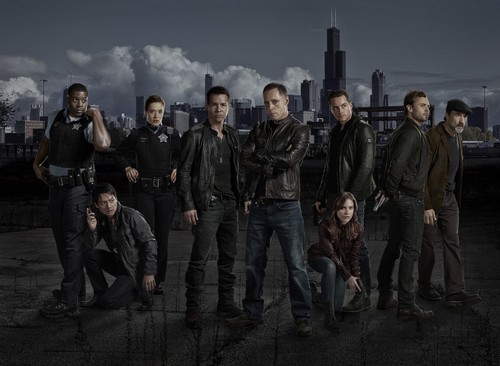 Tonight on NBC their new riveting police drama CHICAGO PD airs with a new episode called, “Chin Check.”  On tonight’s episode after discovery of large amounts of “cop killer” ammo, the intelligence unit is in a quest to find the source.

If you have never watched the show before it is from multiple Emmy Award-winning executive producer Dick Wolf and the team behind the hit series “Chicago Fire,” “Chicago P.D.” is a riveting police drama about the men and women of the Chicago Police Department’s elite Intelligence Unit, combating the city’s most heinous offenses — organized crime, drug trafficking, high-profile murders and beyond.

Hand-picked as the head of the unit is Voight, who has assembled a team of diverse detectives who share his passion, and commitment to keep the city safe.  They include Det. Antonio Dawson (Jon Seda), who is more level-headed and “by the book” than his counterpart; Jay Halstead (Jesse Lee Soffer), a brash young detective who previously saw active military duty in the Middle East;  Halstead’s partner Erin Lindsay (Sophia Bush), a former “bad girl” who turned her life around with Voight’s help; Alvin Olinsky (Elias Koteas), an experienced undercover detective and confidante for Voight;  and Adam Ruzek (Patrick John Flueger), a quick-witted cadet plucked from the police academy as Olinsky’s partner.

On tonight’s show Voight (Jason Beghe) and team head to a house that’s been associated with a number of top gangs. Events at the search result in Ruzek (Patrick Flueger), being encouraged to seek some counseling which may have lasting repercussions professionally and personally. Meanwhile Halstead’s (Jesse Lee Soffer) temper rises when he comes in contact with some unwelcomed people from his past. Jon Seda, Sophia Bush, Elias Koteas, LaRoyce Hawkins, Marina Squerciati, and Archie Kao also star. Robin Weingert, America Olivo, Amy Morton and Josh Segarra guest star.

Antonio is trying to pretend like everything is back to normal. He wants his son to go back to school and get on with the job but there’s always someone trying to change the status quo. At home, his wife suddenly wants to meet his CI Jasmine. She feels the other woman is a big part of his life and she wants to know more about this Jasmine. Laura suggests they invite her over for dinner for one night. Antonio is fine with the box he put the junkie in. He told his wife not to worry about other women and left it there.

At work though he has to put up with Adam. The guy has become a permanent fixture on their team and he’s going to need a desk. It just can’t be Julia’s. Antonio doesn’t anyone sitting in his former partner’s chair. He’s not ready to move on. But as far as Adam is concerned this is just one more hassle. He knows drop the ball last week and he feels like he’s going to have to keep making it up to the team.

He’s getting married in 6 months and he really needs the job. When Jay asked a seemingly harmless question; Adam snapped at him. Something a newbie should know better about not doing. Jay corrected him and told Adam to answer the questions properly.

The team made a bust today but no arrests. They found a large amount of insulin. No one even knows about a market for it. Erin was able to trace the insulin to a drug sales rep. She sent Burgess and her partner after the guy, but they found him dead at the scene. Burgess was just counting herself lucky her case wrapped up quickly when Sergeant Platt ruined her plans. She was supposed to have enough time to show her friends around the precinct when she got reassigned onto a drunk and disorderly.

The stress is starting to get to Adam. He went to see a counselor and after hearing how he’s been adjusting; she realized he shouldn’t be on active duty. She told him he needs to take a couple of weeks off.

Their simply insulin case did turn out to be more. They believe the sales rep was helping to smuggle guns into the country. They asked the man’s widow about and she claimed to have knowledge of her husband’s side business. But she was caught in a lie. Her alibi didn’t check out. She didn’t want to admit to her real alibi – she was seeing an old boyfriend of hers.

Still Erin did get something useful out of the widow. She had mentioned her husband called their nephew right after they crossed the Canadian border. The nephew happens to run in a small time crew and he’s the team’s best bet to tracking his uncle’s killer. The killer has already tied off several loss ends.

Adam isn’t the only one beginning to crack. Jay was able to understand where he’s coming from because an old case is coming back to haunt him. 7 years ago an 8 yr. old child died and Jay felt the kids never got justice. He stops by the parents’ place every year, but it doesn’t do anyone any good. They’re still all morning. Which only riles Jay up. He makes stops by the killer’s house and does his very best antagonize the man.

As for Erin; she also let go of a case going nowhere. Kelly came to her crying about his sister and all she can make is promises.

Hank’s friend, D’Anthony, came to him for help. He needs out of the gang sooner rather than later. Hank tried to get help from Maurice only to find the guy upset. He heard a case was being made against him and he wonder why Hank didn’t tell him beforehand.  Hank didn’t have answers so he let Maurice go. He chose to use Alvin to help and ended up with much better results. They tortured D’Athony’s gang leader into letting him go.

Adam hasn’t told the team about the counselor’s suggestion. He went with them on another bust and it’s lucky that he did. Alvin was used as bait and in amidst of a shootout; Jay was able to save his mentor from getting shot.

Erin can’t wait to welcome back Hank’s son, Justin. He’s just getting out of prison and she feels the people that care about him should be there. Hank doesn’t want to go though. He swears he has to do something more important.  As it turns out he had to make sure D’Anthony left and went to a better home. He even gave him the bribe money he got from Maurice.

Adam did get around to telling his fiancée about his new job. She had noticed something was wrong and asked him about it. He explained how he was in a recent shooting and that the guy he shot died in the hospital. And while she gets freaked out; he claims everything is fine with him. Which only makes even more nervous.