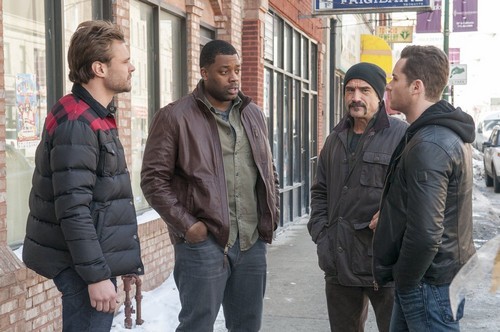 Tonight another new and riveting episode of CHICAGO P.D. airs. In “A beautiful Friendship” the Season 1 finale, Atwater gets used to his new job while Antonio is stuck with desk duty during his recovery. Meanwhile, Lindsay asks Voight for help; and Jin is forced to come clean about his secret meetings with Stillwell.

On last week’s episode the men and women of district 21 confronted past demons and looked to the future as the manhunt for Pulpo unfolded as Antonio’s (Jon Seda) life was now in question, Voight (Jason Beghe) and Platt (guest star Amy Morton) opened up about their pasts. Jin (Archie Kao) was caught while tinkering with Voight’s computer and used the only scapegoat possible to keep him in the clear. At the same time with Charlie (guest star Billy Wirth) back in town Lindsay (Sophia Bush) realized she’s going to have to come clean about a few things. Halstead (Jesse Lee Soffer) finally got answers he’s been wanting about Voight’s and Olinsky’s (Elias Koteas) past. Did you watch last week’s episode?  If you missed it we have a full and detailed recap, right here for you.

On tonight’s finale episode Atwater (LaRoyce Hawkins) is settling into his new gig on intelligence as Antonio (Jon Seda) is relegated to desk duty while recovering. Lindsay (Sophia Bush) finally realizes she has no way out and confides in Voight (Jason Beghe) for help. Meanwhile Jin (Archie Kao) is confronted about his secret meetings with Stillwell (guest star Ian Bohen). It all comes to a head in the season finale. Jesse Lee Soffer, Patrick John Flueger, Elias Koteas, and Marina Squerciati also star. Amy Morton, Stella Maeve and Billy Wirth guest star.

Atwater is settling into his new gig on intelligence as Antonio is relegated to desk duty while recovering. Lindsay finally realizes she has no way out and confides in Voight for help. Meanwhile, Jin is confronted about his secret meetings with Stillwell.

Tonight’s episode begins with Lindsay confronting Charlie after she catches him beating his ex and mother of his child. He threatens that he wants a payday from the women or he will start spilling the information he has on them. He tells the ladies that he gave up twelve years of his life remaining in hiding and taking the blame for something he didn’t do. Now it is his turn to call the shots. He hands Lindsay a note showing the money he is asking for and she laughs at how ridiculous it is. He is not joking, however, and he wants his money by day’s end…or else he will start blabbing.

Meanwhile, as Voight is walking to his car after getting a coffee, he runs into Stillwell who is asking for his cut. Voight tells him he needs to relax and when he gets paid, he will make sure Stillwell gets his cut.

Atwater is settling in as Antonio comes back. Voight tells him he needs to stay on desk duty for at least a couple days. While the team heads over to a scene with possible explosives, Lindsay is obviously preoccupied. Halstead asks what is wrong but she says doesn’t share. Voight starts giving orders to the team as they are called over to a trash can that has a dead body next to it.

Back at the station, Jin is talking on the phone very secretively so it is likely Stillwell on the other end. Just then, Lindsay walks in and asks him for a favor. She needs his help and asks that he doesn’t let anyone know about her request. Atwater tells Voight that he used to live near the construction site they are investigating and knows some people he can talk to for some possible leads. Voight tells Olinsky to go with him but Atwater says he’s good on his own. Olinsky calls him on it, making a production out of the fact that Atwater only just started and is already trying to work on his own. He gets school a bit and they head out.

Lindsay asks Dawson for help now that he is readily available on desk duty. She is supposed to pick up a friend from rehab but asks him to do it for her instead. He is not happy about it, but can tell she needs help.

Halstead and Ruzek talk to Mouse, who may have some information on the construction site. They give him a little money and food and he agrees to set up a meeting with someone who will be able to give them some information. Meanwhile, Atwater talks to his friend and tries to temp him with some benefits if he can get him an introduction to Copeland Briggs. His friend laughs and says there is no way his little offer is enough to get him a meeting with Briggs. Atwater leaves him with his card and leaves defeated but hopeful his friend will come around.

Jin gives Lindsay what she asked for and vows not to tell anyone. Burgess is hating her new partner who pulls over to take a nap while on duty. She snaps a picture and sends it to Ruzek. Mouse leads Ruzek and Halstead right to Charlie. Halstead tells him he may know where to get something he is looking for. Charlie plays ignorant and throws in a couple comments about Lindsay. Halstead isn’t happy and they leave. When he sees Lindsay back at the station he tells her about the encounter with Charlie and tells her he has ties to the construction site. He asks what Charlie has on her but she is vague and tells him she cannot come out with the information or it is over for her.

Dawson does his favor and picks up Nadia from rehab. He has to convince an untrusting Nadia that Lindsay did actually send him in her place. Back at the station, Atwater shares with Voight how Briggs may be able to help. He provided security to the site previously. Meanwhile, a keen-eyed Burgess stops a robbery in progress while her lazy partner would prefer to finish his sandwich. Shortly after, Jin meets with Stillwell on a street and tells him about Lindsay’s request for blueprints to a jewelry store. He is very shaken, but needs to give up the information as Stillwell keeps making threats about Jin’s father. Just as Jin walks away after Stillwell tells him he better get more information, Jin walks right into Voight who tells him, “I think we need to talk.” They drive to a remote area. Vouight asks if there is something Jin needs to tell him. Jin cries as Voight explodes on him for breaking his number one rule. Voight throws him against the car and asks, “Who do you work for?”

When Voight comes back to the station, he sees Lindsay is troubled. He asks what is going on and she starts opening up in more detail about her past with Charlie. Voight comforts her then takes a brief break to check in on the team’s progress. Dawson shares his marital troubles with Voight. His wife doesn’t want him back at work.

Atwater, Halstead, and Ruzek meet with Atwater’s friend who called them when Briggs arrived. He takes them to the back of the store to meet Briggs. Instead of playing it cool like Atwater began to try, Halstead isn’t playing any games and simply tells Briggs that he is a cop and that unless he wants people seeing him with cops and thinking he may be a CI, he better give up what he knows about the construction site and he better do it quickly. It works and they get some information and take off. Back at the station, Voight briefs his team and tells them that a CI provided a tip that Charlie was planning on using explosives to break in and rob a jewelry mart. Once they catch him in the act and throw handcuffs on him, he starts bringing up what he knows about a murder from years prior. Voight tells them to throw him in the car. At the station, Lindsay talks to Charlie asking about the murdered guard. He assures her he didn’t murder him but he knows Red did.

Burgess gets some good news and she is going to get a different partner. She shares the news with Ruzek. He and the team head out to the yards following a lead. As Ruzek is walking around the area, shots are fired at him from a building. Voight calls for back up as multiple gunshots are fired. A van comes out of the building and they chase after it. Lindsay shoots at the tires and the van crashes. One of the men gets shot and Lindsay is standing behind him with her gun as he falls.

Voight meets with Stillwell. He gives him 5000.00 telling him it is what he collected off the street. He says it is completely untraceable. Meanwhile, Jin talks to his dad on the phone telling him to get out of town. Jin is getting ready to take off and is taking key information with him.

Burgess gets a knock at her door. It is Ruzek. He tells her he misses her. She immediately begins kissing him and closes the door. They begin to follow their passions. Dawson comes home to an empty house, finding only a note…his family has left him. Voight arrives at a crime scene where he is met by Stillwell. On the ground is Jin…dead. Stillwell tells Voight Jin is dead and says he believes his is one of Voight’s men to which Voight responds by shaking his head and saying, “Yes, he was.”

Well, folks..we have to wait until fall to see what happens with our favorite characters.