Chris Brown Back With Rihanna To Hurt Cheating Karrueche Tran and Drake: Going In For The Kill? 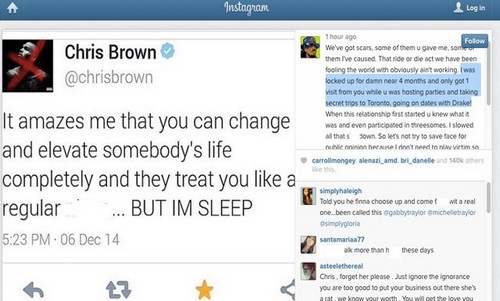 We predict Chris Brown will be back with Rihanna in a minute after his breakup with cheating Karrueche Tran who he says dated Drake while he was in jail. Chris Brown and on-off girlfriend Karrueche Tran have broken up and gotten back together about as many times as Justin Bieber and Selena Gomez, but now the couple is throwing some serious shade at one another and calling out some major indiscretions and things are likely about to blow up from here.

While Karrueche Tran is trying to keep things from getting too nasty, Chris had to go there after Tran had been tweeting comments that portrayed her as the victim. Chris quickly called her out, via Instagram of course, and quickly threw out all her wrongdoings in the relationship for all to see.  Though Chris’ comments have since been deleted, many captured the details that offered a window into the dysfunctional relationship, “We’ve got scars, some of them u gave me, some of them I’ve caused. That ride or die act we have been fooling the world with obviously ain’t working. I was locked up for damn near 4 months and only got 1 visit from you while u was hosting parties and taking secret trips to Toronto, going on dates with Drake! When this relationship first started u knew what it was and even participated in threesomes. I slowed all that s**t down. So let’s not try to save face for public opinion because I don’t need to play victim so people can take my side. All these celebrity ni***s ain’t s**t and focus only on themselves. I made it clear to the world who my girl was and made your life equal to mine even at the cost of me not focusing on my career at times. So miss me wit the bull s**t. Now yall know the real.”

Now, to make matters even more confusing, the sticky triangle that has been Chris Brown, Tran, and Brown’s ex-girlfriend Rihanna is in the spotlight once again. The Inquisitr reports that Brown may be angling to get Rihanna back. Now that the Brown and Tran are finally dunzo, Brown wants the relationship that he gave up, back.  The last time Brown and Rihanna got back together, Tran was still in the background and Brown felt bad for leaving her because she had always remained by his side. Now, after hearing rumors she cheated, he is over Tran for good and has vowed he won’t be back. Though he’s been notorious for cheating and flirting with women while with Tran, he feels she needs to tolerate it because of how he’s helped her career. He says once she cheated on him, with arch rival Drake, no less, he felt the disrespect factor was way too high for him and he ended it right then and there. Now, he is finally ready to be with Rihanna exclusively.

Not only does Brown want Rihanna back because of strong feeling he’s has for her, he loves the fact that it will burn up both Tran and Drake. Drake has been in love with Rihanna for years and though they have been on and off for a while, Rihanna was never passionate about Drake. Brown knows that if he gets Rihanna back, he’ll get a girl who is badass, yet down for him, he’ll completely piss off his recent ex, and he’ll drive Drake crazy with jealousy. All in a day’s work for Brown who’s known for breeding new enemies almost daily.

What do you think CDLers? Will Rihanna be down for a third time with Brown? Will she tell him to take a hike after how he treated her? Or will Tran kiss and make up by soothing Brown’s insanely huge ego? Tell us below!