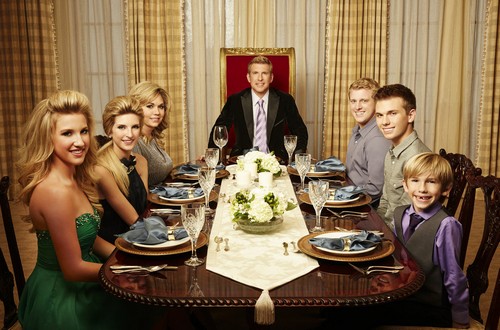 Tonight on USA Network their new reality show CHRISLEY KNOWS BEST premieres.  The show  is a real-life family comedy which follows Atlanta-based self-made multimillionaire Todd Chrisley, his devoted wife Julie and their five children who live a seemingly picture-perfect Southern life with everything money can buy.  A “patriarch of perfection,” Todd runs his family just like his business – with an iron fist – and micromanages every move and expenditure made by each member of the Chrisley clan.  But behind the façade of the family’s fairy-tale like 30,000 square-foot home, real-life issues and lots of laugh-out-loud drama unfolds.

On tonight’s episode we meet the Chrisley family, where Todd Chrisley is king. He micromanages his family just like his business and always tries to stay five steps ahead of his 5 children, especially his girl-crazy, teenage son Chase. When Chase disobeys Todd and sneaks out to go to a football game, he quickly learns the consequences of disobeying the king.

The series premiere of USA’s new reality show Chrisley Knows best opens with Todd and Julie Chrisley, suburbanites living in a gated community down South.  Todd has made all of his money on real estate and now he is launching a lifestyle and fashion line called “Chrisley & Co.”  Todd is a control freak, he monitors his five children very closely, even has GPS trackers on their cars.

The oldest Chrisley child is Lindsie, Todd says she is “bitchy.”  She married her husband without her Dad’s permission, and without a prenup, and just had their first grandchild.  Chase their 17 year old son is currently banned from using the internet, because Todd knows he has been looking at porn.  Their 15 year old daughter Savannah is an aspiring Pamela Anderson and competes in beauty pageants.  Their youngest son Grayson is the “love of Julie’s life.”  Kyle “marches to his own beat” and Todd has spent over a million dollars trying to help Kyle “find himself.”  Todd may make millions of dollars a year, but he thinks he still has the same issues as parents that make $40,000 a year.

Julie heads to school to pick Grayson to pick up form his first day of first grade.  On the way home he begs his Mom to take him to Hooters so he can “see some hot girls.”

Savannah is begging her dad to let her go to a high-school football game with her friend Al and then out to Waffle House.  Todd says that he and her mother will take her to the game and treat them to Waffle House.

Lindsie shows up with her baby Jackson for dinner, and tells her Dad he needs to stop “hovering” over the kids.  Chase asks Todd when he lost his virginity, and Todd says he didn’t lose it he “gave it away.”  Chase doesn’t see the problem, he’s just trying to give his virginity away too.

Todd is excited to meet with his buyer Maggie, and discuss fashion, “it’s his passion.”  The Chrisley & Co. start-up store is supposed to be up and running in two months.

Chase, Savannah, and Lindsie head to the nail salon and get pedicures together.  Chase calls his Dad and asks him if he can go to a football game.  Todd says no he can’t go to the game.  Chase decides he is going to the game anyways and leaves his sisters at the nail salon.  Todd knows Chase is up to something so he has his wife pull of Chase’s text messages.

Savannah shows up and Todd and Julie give her the third degree about where Chase is.  Savannah says she has no idea.  Chase finally arrives home, and Todd asks him why he went to the football game after he told him not to.  Todd tells Chase from now on he is “rolling with him.”  Chase tells his parents his house is Alcatraz.

Todd knows Chase is a “visual learner.”  So, instead of arguing with him, he puts a boot on his Range Rover so he can’t go anywhere.  The next day Chase heads outside and sees the gift his Dad left for him.  Todd tells him to take the bus, or ride with his Mom, for at least a week.

It’s time for Episode 2 of Chrisley Knows Best, and it’s Savannah’s Sweet 16th Birthday Party.  Chase is a little jealous that he never got a 16th birthday party, guys have Sweet 16 parties too, Justin Bieber had one.  And, Chase thinks Justin Bieber is “a badass.”

Meanwhile Todd is going to war with his six year old son Grayson, who told Todd he needs to “watch who he is talking to.”

Todd heads upstairs to help Savannah pick out her Sweet 16 dress, he is making her do the – test to make sure she isn’t wearing a “coochie cover.”  Todd is annoyed because none of the dresses she tried on are appropriate.  Meanwhile Chase is pretending to put dog poop in the hood of Todd’s sweatshirt.

Chase tells Todd that there is a “big boy” named Isaac coming to Savannah’s party, and they like each other. Todd isn’t scared, but chase warns him that Isaac is 6”5 and weighs over two hundred pounds.

Julie tells Todd that she overheard Savannah on the phone talking about the boys that she liked that were coming to the party.

It’s finally Savannah’s big day, her stylist arrives to do her hair.  Meanwhile Todd is lecturing his wife about the outfit she plans to wear to the party.  He’s not a fan of her “camel toe” and tells her she needs to change.  Julie heads upstairs to make sure Savannah’s eye make-up isn’t too dark, and Todd picks out Chase’s outfit for him.  Todd doesn’t have any problem getting dressed though, because when he walks in the closet “the clothes are just jumping out to get on his body.”

The Chrisley family heads off to Savannah’s Sweet 16 Party, and Todd makes a deal with Savannah that as long as she doesn’t drop it like it’s hot, he won’t drop it like it’s hot.  Isaac, aka “The Buford Bison” arrives at the party, and Todd introduces himself to Isaac and calls him his “future son-in-law.”  Savannah tries to get her Dad to stop embarrassing her, but he tells her not to talk like that “in front of her husband.”

Chase sneaks out of the party with a girl named Elle.  Todd is furious that he turned his back for one second and Chase’s “little creepin ass got away.”  Todd heads outside and finds Chase in the back seat of his Range Rover with Elle.  Todd tells him he has “two seconds to get his ass back in the building.”

After the party Todd and Julie surprise Savannah with a brand new Mercedes convertible, because you know every sixteen year old girl needs a Mercedes.

Todd realizes that Savannah is growing up and he is going to have to let go a little bit soon…but not yet.