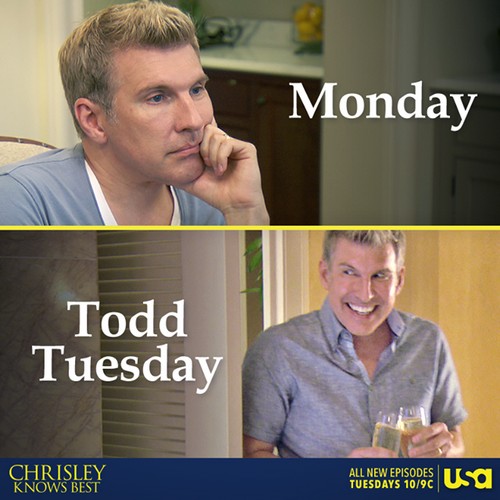 Tonight on USA Network their new reality show Chrisley Knows Best continues with an all new Tuesday December 2, season 2 episode 10 called “Marriage Redux,” and we have your weekly recap below. Tonight, Todd Chrisley and Julie look for new ways to connect.

On the last episode, Todd and Chase were forced to experience the great outdoors when Grayson insisted on going camping. While the guys “rough it” in a luxury RV and terrify Grayson with stories of a haunted lake, Savannah and Julie had to go back to driving school to relearn the basics. Did you watch the last episode? If you missed it, we have a full and detailed recap right here for you.

On tonight’s episode as per the USA Network synopsis, “Todd and Julie look for new ways to connect and put a spark back in their relationship they thought was long forgotten.”

Julie says their life is really busy and the kids are pulling them all over. Todd goes to drop Grayson off for baseball then is going to meet his wife for lunch. Halfway there, Grayson says he forgot his stuff and they have to go back for it. He calls Julie and says he’s running late and for her to order food. Then Grayson says he has to go number two. Todd is annoyed. Julie calls and he tells her to eat without him since Grayson has to poop. He then gets a call from the coach canceling the game because of rain.

He calls Julie and says to enjoy her lunch and he’ll be at home with their son. Grayson tells him to stop being a whiny baby. Julie and Todd go over their schedules. Savannah comes in and asks why they’re always making lists. She says they have shown her to never have kids. Julie says you have to divide and conquer all day then fall into bed at night. Julie says she and Todd are going to do some stuff on their own. She wants to take a pottery class and he says his choice is Kama Sutra.

Savannah Googles it and says it’s medical marijuana. Todd asks how he can have kids that dumb. They go to Decatur to take a pottery class. Todd says they should do a nude pottery class and she says they’re not Patrick Swayze and Demi Moore. He says they can pretend. Todd is completely perverted at the pottery class. Todd tells her that her pottery looks like a pile of crap. She says it was just a chance for them to have fun together. He gets behind her like they did in Ghost and she giggles.

He gets clay all over her face and then they break into a huge clay fight. He kisses her and she complains that her makeup looked good and he ruined it. Chase comes in to talk to Savannah. He says his parents being busy leaves him time to go out with his friends. He says he planned to get a hotel room and have a party but she says no. She tells him she has a photo shoot to kick start her modeling career. She says she’s not telling her dad because she doesn’t want him there.

She says he was a monster when she was in pageants. She says if he’s there it won’t turn out like she wants. They agree not to tell their parents what each has planned. Julie thanks Todd for going to pottery then suggests they go to a dance class. Savannah heads for her photo shoot at Eide magazine. The editor says the issue is about designers that are from the South. Chase says his sister can put a trash bag on and thinks she looks the best in the world.

He hassles her about her selfie habit but she says he does too. Savannah says the shoot is getting a little sexier than her dad would have liked but it’s done now. Julie makes biscuits. Todd asks Savannah what she changed about her hair. It’s still done from the shoot. Chase hints but his dad doesn’t figure it out. They tell the kids they’re going to a hotel that weekend. Chase is happy that he knows his parents are going to be gone, he can make his plans.

Todd and Julie go to their ballroom dance class and says it’s going to be like Dancing with the Stars. Todd is struggling from the get-go. He says this kind of dancing is harder than he anticipated. He says when he dances it’s more like a seizure. He has to dance with the male instructor to show him how. Julie says she did well. She liked the class – Todd says now it’s off their list. Chase calls Wyatt about their night out.

He says he’s going to get a hotel room and they are going to have the party and spend the night. He says the hotel he’s chosen is one his dad uses for business meetings and they go there to eat so he thinks they’ll hook him up. Todd and Julie check into their lovely hotel suite and he says this is what he wants to do. He says this is their first time away from the kids in 10 years. He says they could just live there and she asks what about the kids – he says what kids.

She says she’s going to go take a bath and put on her robe. He says this looks good for him. He runs her a bath and says he’s going to go get her a drink. She soaks in bubbles and he brings her champagne. She says she could get used to this. He says this is what it’s going to be like when they have no kids at home. She says it’s going perfectly. The bell to the suite rings and she goes to answer. It’s some kids who says they’re here for the Chrisley party.

She asks Todd what the hell he’s doing – she thanks this is him pulling a surprise party. He goes to the door and finds two scantily clad women there – exotic dancers. She asks for Chase. Todd calls the front desk and asks if Chase checked in. Todd tells Julie that Chase is at the hotel. Chase tells Wyatt he’s hoping the dancers will be hot. Todd finds his phone and gets a text from Savannah about signing a release from Eide magazine for her photo shoot.

Todd says Savannah must think she’s Christie Brinkley. He asks what part of the stupid train these kids haven’t ridden on. He tells her to handle Savannah and he goes to deal with Chase. He rings the bell and Chase opens the door to find his dad in a robe. Todd says Chase looks like he wants to jump through his own ass. Chase tries to lock him out then lies to his dad and says they were just playing poker. Todd asks why two dancers came to his room.

He tells Chase and the guys to leave and says Chase is going to spend the night with he and his mom. He tells his dad this sucks balls. Savannah says he should have checked to see where their parents were staying. They drive Chase home and Chase asks if he’ll get a refund on the dancers. Todd says a real man wouldn’t have been caught like that. Julie says he makes her sick and Chase says he loves her. Julie tells them all to shut up.

Todd says they can still finish their evening at home but she says she dang sure isn’t in the mood now. She says just to take them home. They get home and sit Savannah and Chase down. They tell them they always get caught and wonder when they’ll give up. They chew Savannah out about the photo shoot. She says she was going to show them the photos. Her dad says she can’t go off with a photographer because they may not be legitimate.

Julie tells Chase he’s an idiot for not checking where they were staying. They chew them both out then send them out of their room but tell them they love them. Todd says you’re supposed to forgive those that are not as bright as others and that includes their children. Julie says they had a good week but it didn’t work out quite as well as they wanted. Todd says the kids just screwed it up!