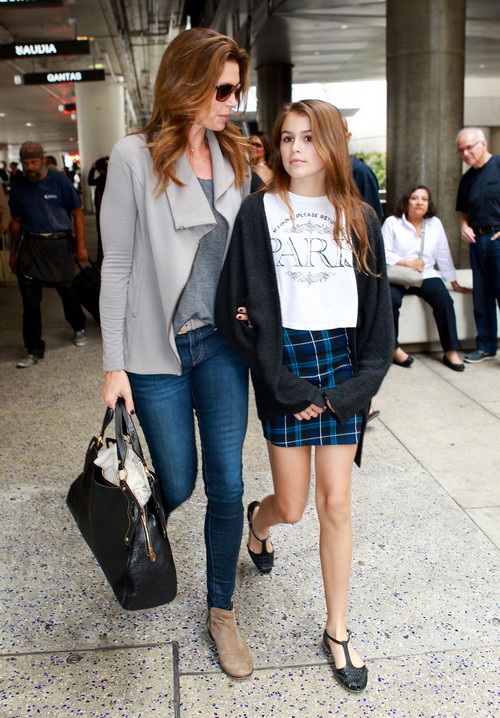 Cindy Crawford and her daughter, Kaia Jordan, were photographed at LAX Airport recently. The duo were returning from Paris to promote Meaningful Beauty, Cindy’s cosmetic line.

We don’t usually see Cindy or her family in public, so these pictures are quite rare. Kaia looks like exactly like her mother, and she’ll be probably a dead ringer for her when she gets older. They were both wearing comfortable yet fashionable travel clothes, and Cindy had her arm linked with Kaia’s as they walked past photographers.

One thing that’s always great about Cindy [and older celebrities, in general] is that she doesn’t carry around any air of arrogance or attitude, and she’s always polite and smiling, no matter how many paparazzi or fans are surrounding her. Whether it’s at a public event or a fashion shoot, she’s reportedly been nothing but professional to everyone around her, and she’s supposed to be a darling to fans. With this day and age of Justin Biebers and Chris Browns, we should be happy that there are some celebrities that understand the meaning of respect and politeness.

Cindy’s cosmetic line is also doing quite well, which is probably just as much of a testament to Cindy’s ageless beauty as it is the quality of the products. The products all reportedly contain material from a rare melon which in turn contains a power anti-oxidant, cultivated in the south of France.

What do you guys think about the photos, and have you tried Cindy’s cosmetic line? Let us know your thoughts in the comments below.