BY Kristine Francis on May 30, 2014 | Comments: one comment
Related : Recap, Television 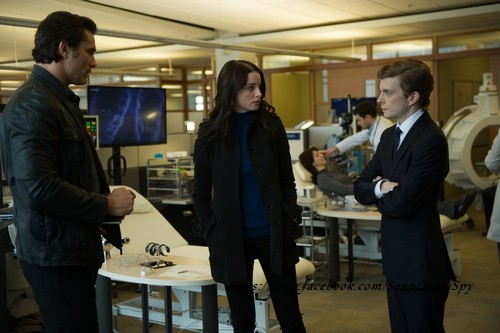 Syfy’s series CONTINUUM continues with a new episode tonight called, “Minute of Silence.” In tonight’s episode, Kiera alone pursues a group of brilliant students who are using cutting-edge technology to commit crimes; at the same time, she’s pursued by a handsome amnesiac who wants her help piecing together his mysterious past.

If you have not watched the show before “Continuum” stars Rachel Nichols (Criminal Minds, Alias) as Kiera Cameron, a cop from the future who finds herself trapped in the present day. When a group of fanatical terrorists escapes their planned execution in 2077 by vaulting back in time to 2012, they inadvertently sweep along Kiera, a dedicated City Protective Services officer.

On last week’s episode Kiera faced more hard truths when paired on an investigation with Dillon. Julian put himself in the spotlight by exposing a corporation’s dirty deeds. Alec was put under the public microscope with the discovery of an unpleasant secret by Carlos.

On tonight’s episode Kiera, without much help from Carlos, pursues a group of brilliant students who are using cutting-edge technology to commit crimes; at the same time, she’s pursued by a handsome amnesiac who wants her help piecing together his mysterious past. Elsewhere, Kellog finds a way to get back into Alec’s good graces, while Alec goes to dangerous lengths to perfect his new invention.

Continuum season 3 episode 9 airs at 10PM on SYFY and we will be live blogging it with all the up-to-the-minute details. So make sure to come back to this spot and spend the evening with us! Make sure to refresh often to get the most current details and updates!

In the aftermath of Betty’s death, the squad is falling apart at the seams. Carlos wants justice and Inspector Dillon is withholding his consent to open an investigation. Their squad has come under a lot of suspicion lately and Dillion has way too much on the line to push to the powers that be any further than he’s already done. He had made a deal with them – the squad won’t look into Betty’s death and in return Betty was buried with full honors and any corruption on her part was deeply buried. But Carlos sees this “deal” as a joke. So he was “advised” to take some time off to clear his head.

As if Carlos could let this go that easily. There’s been a lot he’s been forced to handle by himself and he’s tired of being the one to shoulder most of the burden. And because he couldn’t go to Kiera he then chose to go to Alec. Alec was once a great kid that was always willing to help. Yet that kid has been gone for a while now and he’s been replaced by an emerging tycoon. So either Carlos forgot that part or he’s slowly slipping into self-destruction.

Carlos brought Alec to the storage facility. He wanted to be able to talk about the originals and the second Kiera’s body. However Alec was more upset by Kiera’s betrayal than he was helpful. Finding out that the Kiera he’s been speaking to was form a different timeline has only served to upset him. And it’s not fair. Kiera isn’t even around to defend herself.

Kiera was called in by the hospital. The doctor in charged said her patient was asking for her by name. Although the poor man appears to remember nothing, but Kiera’s name. John Doe awoke from a two month coma after he was hit by a truck. He didn’t recall a thing about himself though he did know Kiera’s name.

Oddly enough John Doe isn’t in the system. Not in the ones here in 2014 or in Kiera’s personalized database. Which got her thinking as to why.

Kiera tried calling Alec for his help and she found him to be somewhat reluctant so she ended up having to take over of John Doe. And hopefully get his memory to come back on his own. They found the place he was staying at and it turned out to be a low rate hotel rental. He had apparently booked it for three months expecting his business to be wrapped up by then. Only he just doesn’t remember why.

As they were leaving – they ran into Chen. Chen keeps popping up everywhere, but when they ran into him – he was heading to John’s hotel with a purpose. Sadly, Kiera never found out what the purpose was seeing as she got into an very uneven fight with Chen prior to him getting the better of her. He would have killed Kiera if John hadn’t stepped in.

John may not remember his name yet it seems does remember martial arts. He disabled Chen and got the other man to run away – from him. So, as the plot thickens, who is he?

Kiera knows he’s military trained (by the way he moved and the speed in which he healed) and when John complained about the world feeling much different that he was used – she guessed he was possibly like her. She thinks John Doe went back in time like she did. And she would have explored her theory further if work hadn’t called her away.

There’s been a string of break-ins at high end facilities. Usually what’s taken is military intelligence and the latest break in happened at Alec’s corporation. Alec had a lot on his mind recently, more than merely Kiera, when the break in went down. And one stolen prototype doesn’t equate to the threat hanging over his head. After all he’s being sued by Kellog.

Back when they were making deal, Alec had foolishly signed a non-competitive clause with Kellog and that means Kelllog has a take in each invention Alec will ever make. So naturally, the detectives suspected Alec of being behind his own break-in. What better way to escape Kellog handing over your life’s work than pretend it was “stolen”. But this wasn’t him.

This was Gray Point Security and their number one henchman – Neelon.

Neelon recruited youngsters to help him break into high tech facility. His men would break in and then he’d watch on one of his many screens as the police tried to figure it out on their own. In case it escaped your notice – Neelon guaranteed his entrance into the squad room last week. He did this to plant cameras. And to get the police to lay off of him – Alec pointed out the cameras that were probably watching their whole exchange.

The police needed to find Neelon and they didn’t know how. He had completely hacked their system and knew their every move. So they had to turn to an outside source and that source happens to be Lucas. Lucas was willing to offer his assistance out of respect to Betty and he led the two detectives right to Neelon’s den.

They were able to capture both Neelon and his teenage partner-in-crime thanks to Lucas.

Inspector Dillion wanted the chance to crack Neelon and found it to be difficult. Neelon doesn’t want to believe Gray Point Security has turned their backs on him, but he’ll be forced to deal with the fact that no one will come for him one way or another. Even if the good inspector has to beat the truth into him.

Meanwhile Kiera found definitive proof that John Doe is from the future and she’s planning on helping him. Yet it would be best to point out that she might not have full control of her faculties for long. Once Alec cleared up this “lawsuit” with Kellog – he returned to the storage facility without Carlos’ knowledge.

He removed the chip out of the dead Kiera’s body and because the most known chip is the citizen chip – there’s no telling what Alec will do with it or how much it can affect the living Kiera? Like Ok, she lied but does that mean their entire friendship should be thrown away so effortlessly?