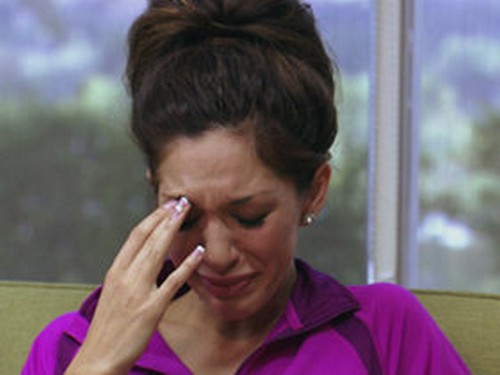 Tonight on VH1 is the 4th season premiere of COUPLES THERAPY called, “Therapy Begins.” On tonight’s show the first group therapy session features a discussion about dark moments in past relationships.  Did you watch last week’s premiere episode?  We did and we recapped it, right here.

On last week’s show therapy began with a new group of celebrity couples with extreme issues coming to therapy with Dr. Jenn Berman and her staff for help healing their broken relationships. Shockingly, one of the women was stood up by her boyfriend at the last minute and she arrived alone and heartbroken, and another couple’s trust and fidelity issues exploded before therapy can even begin.

On tonight’s show the couples dive into their first group therapy session, where they each discuss the darkest moments in their past relationships and how that impacts them today. Taylor discusses the horrifying abuse she experienced with her ex-husband Russell, and how she found him hanging in the closet after he committed suicide. While Kelsey discusses the abuse she experienced in a relationship, she reveals that she was a stripper when she was younger, which infuriates Ghost. Dr. Jenn has a revealing therapy session with Farrah, where she discusses her infamous ‘sex tape’. After all of the emotional therapy, Dr. Jenn sends the group out for a fun night on the town, where Taylor and Farrah butt heads. Later after the group returns, Taylor and John blow up complaining about their accommodations and threaten to leave.

Tonight’s episode is going to be another drama packed one, which you won’t want to miss. So be sure to tune in for our live coverage of VH1′s Couple’s Therapy Season 4 episode 2 at 9PM EST! While you wait for our recap, hit the comments and let us know how excited you are about the new season of Couples Therapy tonight.

The second episode of season four of Couples Therapy begins with a rough group session for all of the couples. Dr. Jenn Berman wants everyone to talk about the most painful moment in their lives and she starts with Taylor Armstrong. RHOBH ‘s fans are familiar with Taylor and know that she was abused by her ex-husband until she found him hanging. Farrah Abraham admits that she didn’t want to have her daughter and that her mother refused to help her get Plan B so that she wouldn’t be a Teen Mom.

Whitney Mixter and Sada Bettencourt had a knock down fight that escalated to the point of physicality and Ghostface Killer disrespects women because the first girl that he loved cheated on him. His girlfriend Kelsey Nykole describes a physical fight with an old boyfriend that left her dangling a few floors above the ground. It seems like everyone but Farrah has suffered through seriously abusive moments.

After the session Ghostface is upset because he just learned that Kelsey briefly danced . He can’t seem to cope with her dropping a grenade in his lap but she’s supposed to be cool with his harem of women. Kelsey ends up in the bathroom crying because Ghost is such a judgmental hypocrite. They are pulled into a session with Dr. Jenn and she points out that if Ghost disqualifies people for their past then he’s missing out.

All of the house guests get to go out to have some fun. Taylor has had a few drinks and is totally blitzed and acting nutsy. They finish bowling and then sit down to dinner. The table just orders drinks and Farrah decides to go ahead and order he food while everyone watches. Taylor is drunk and pissed because Farrah is rude. Watching Taylor slur her way through this interview about her thoughts on Farrah is pretty hilarious. In this moment Farrah looks a whole lot better than Taylor. They all return to the house and Taylor’s behavior escalates. We have always heard rumors about what an entitled drunk Taylor is but boy is it worse than I ever imagined. Next week she’ll have to answer to Dr. Jenn for her behavior. I can hardly wait!