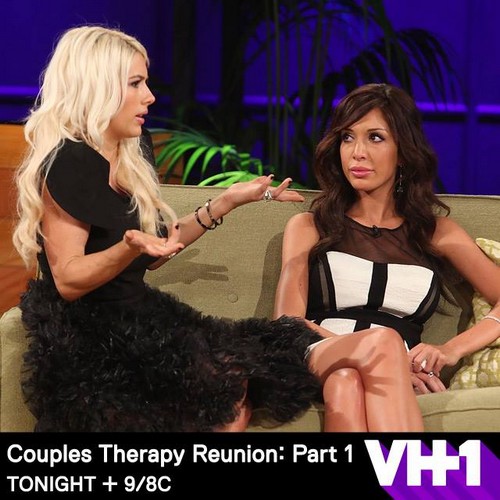 Tonight on VH1 is a reunion episode of COUPLES THERAPY called, “Reunion Part 1.” On tonight’s show a status report on couples from past seasons of the series. Included: Doug Hutchison and Courtney Stodden.

For those of you not familiar with the show, everyone knows how much work even the best of relationships can be, but imagine the pressure of having your relationship scrutinized under a media spotlight where everything is blown out of proportion. In Hollywood, a discussion becomes a screaming match, showing up to a red carpet event alone equals getting a divorce and having lunch with someone who is not your spouse means you’re having an affair. Living in the spotlight really amps up the pressure of being in a relationship and “VH1 Couples Therapy with Dr. Jenn” hopes to shed a little light on the complicated and often misunderstood world of high-profile relationships.

On tonight’s show former participants of Couples Therapy return to discuss how the show’s impacted their lives and to update people on how their relationship is currently doing.

RECAP: Tonight’s show is all about closure. Closure for those that have since broken up after the show and for others who are still working through their marital problems. This is the update on some of Couples’ Therapy most well-known guests!

Dr. Jenn decided to start the night off with Nik Richie and Shayne Lamas from Season 2. The two of them had met and gotten married in an outrageously short period of time. Try eight hours! So they had originally come on the show after they realized they needed help in building up their marriage. And more importantly learning who they are married to and how to live with that person because the earliest days were without the doubt the roughest.

When they left the show, though, all was good between them however the couple did go on to experience more than a fair share of heartache after they left. Sadly, they had gone through a scary miscarriage that nearly cost Shayne’s life. Afterwards, Shayne was told she could never have any more kids, but thankfully the couple were able to find a surrogate that was willing to carry their baby and they can officially announce now – they’re pregnant.

So their marriage is working for the better. But not everyone can make that same claim. Joel “JoJo” and Tashaunda “Tiny” Hailey has come to the show in hope of saving their marriage from his addiction. And as it turns out he hasn’t stopped drinking to this day.

JoJo is an alcoholic and yet he refuses to seek help or trying quitting on his own. Hence a lot of the times his wife was stuck having to watch or “mother” him. That is until she put her foot down. Tiny threatened to leave him if he didn’t stop drinking and when he instead chose to “slow” down his drinking believing that to be compromise – she chose to stop focusing on him and think of herself for once. So she’s been going to Al-Anon where she can speak to other people who knows what it’s like to live with an addict.

And Tiny did work up the courage to leave him a few times, but in the end she always came back. So JoJo doesn’t think he should stop and he won’t listen to Dr. Jenn, his kids, his wife, or his management when they all tell him his drinking is detrimental. Plus, He can sort of get aggressive when his drinking becomes the topic of discussion.

Doug had mentioned that he thought JoJo was drunk even now onstage and that had set JoJo off because he refused to have someone like Doug judge him. Doug Hutchison and his wife Courtney Stodden are probably the most controversial couple that has ever been on Couples Therapy. And that’s because of their life story before the show, on the show, and after the show!

Doug was in his fifties when he married the sixteen year old Courtney. And though a lot of the cast had pointed out the obvious problems in their marriage beforehand – the couple had ignored them. Then they went through a rough patch. Courtney had blatantly walked out on her marriage by openly flirting with other guys and pretending to be single while on Celebrity Big Brother.

Doug was hurt by her actions and had asked for a separation (in his words) in order for her to grow and experience a little bit more of life seeing as that’s clearly what she needed at the time. But the other members at the reunion chime in at this point because they can’t help pointing out that they warned the couple that exact thing was going to happen. That Courtney was going to grow up and want a life outside of a marriage with a fifty-one year old.

Farrah, oddly enough, attempted to defend the couple and in doing so made some enemies. She constantly came to their aid and she didn’t use the right way to go about it. As in she insulted other people and told them to stop ganging up on Courtney and then said to JoJo and Tiny they needed to shut the f*** up. And Tiny isn’t the kind of person that’s willing to take that lightly. So the two women started arguing and the couple that actually had the right to speak where cut off short.

As of yet all we know now is that Doug and Courtney are back together.