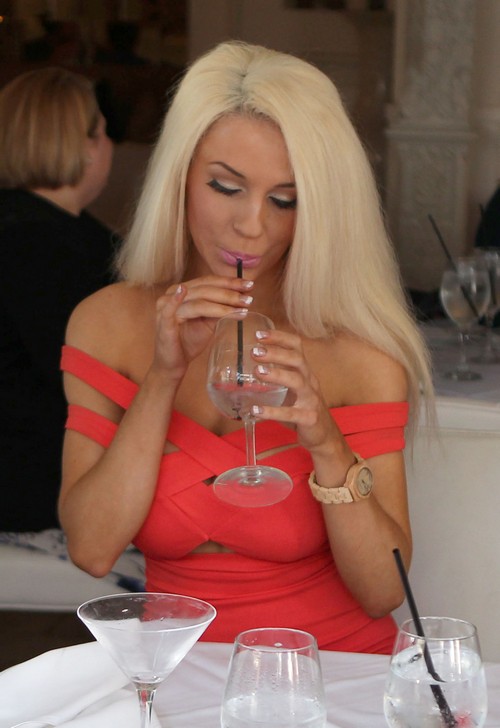 Ahh, Courtney Stodden. Why is she semi-famous again? Is it because she married an already washed up middle-aged actor when she was only 16? Was it her stint on VH1’s Couple’s Therapy with Dr. Jen Bermann- you know, when she was kicked out of the house for refusing to wear clothes with her mandatory stripper heels? Or maybe it’s because of that stint on Big Brother UK where she learned to party like a pro while forgetting to keep her dress on. Who knows but one thing is for sure, when she decides to call the paparazzi they show up because they know there will be at least one great peep show shot.

So Courtney decided to have lunch on Friday in Beverly Hills with a few of her favorite photographers. Okay who are we kidding, this chick doesn’t eat. All of her caloric intake comes from either a shot glass or a bottle but that’s a different story all together. On Friday she went to lunch kinda, which is code for Courtney got another boob job and wanted to unveil her new twins in a coral dress. Mission accomplished, the photos are out there. Are we impressed?

Actually there is one thing about Courtney that is pretty impressive, aside from the hilarious stupidity of this chick, her ability to drink like a fish and still teeter in those shoes without toppling over. That, is her true talent, right? In the meantime, enjoy the pics. You might as well, girlfriend went to great lengths to be able to get these for all of her fans! Are you impressed by her new and enlarged assets or do you just wish she would go away already? Tell us in the comments below!