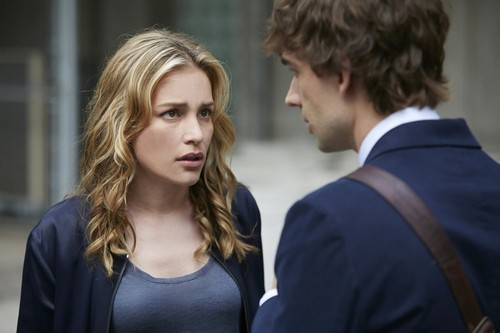 COVERT AFFAIRS continues tonight on the USA Network with another episode in its fifth season called, “Spit on a Stranger.” On tonight’s episode Annie begins an operation without support from the agency; Calder interrogates Auggie.

On the last episode Annie and Auggie dug into a conspiracy theory about the attack on the CIA. Did you watch the last episode? If you missed it we have a full and detailed recap, right here for you.

On tonight’s episode Annie initiates an undercover mission without CIA support while Calder interrogates Auggie regarding a breach of protocol. Meanwhile, a new recruit arrives at McQuaid Security.

Tonight’s episode looks like it’s going to be great and you won’t want to miss it, so be sure to tune in for our live coverage of USA Network’s “Covert Affairs” at 9:00 PM EST! While you wait for our recap hit the comments and let us know how excited you are for the seventh episode of season five of Covert Affairs tonight. In the meantime, enjoy a preview of tonight’s episode below.

Annie managed to leave McQuaid’s place alive after she started to suspect him and yet she wants to risk her life a second time by secretly spying on McQuaid. She and Auggie had later talked about the man they believe had been following Roger and he had suggested at the time that take their case to Joan. But Annie was never one to follow that particular suggestion. Because, despite all the times Joan has tried to reach out to her; Annie never really trusted the other woman to be on her side. So if there’s going to be any investigation into McQuaid – Annie wants to do it herself. On a more “personal” level!

And seeing as Auggie reminded her that she was still in fact suspended – Annie decided to work outside of the department. To do this she had to hand in her notice which meant she walked away from her career even after Joan tried to talk some sense into her.

That was both unusual and pretty hot-headed for Annie (and that’s saying something). So after she stopped feeling hurt by Annie’s choice – Joan wised up. She started questioning Annie’s somewhat reckless behavior. And she came to the conclusion on her own that her former protégé did not quit and thereby destroy her entire career simply because she didn’t like the CIA’s policy.

But Annie taking a job with McQuaid was the final clincher. If Annie truly wanted back out onto the field that bad that she would take a job with McQuaid then she would have fought for her position back at the department. She wouldn’t have just given up like the way she did. So Joan began to wonder if Annie was on an unsanctioned mission. It’s not like it would be the first time that Annie’s gone rogue.

Joan had mentioned her thoughts on Annie to her husband and Arthur had doubted her. At least at the time however he eventually saw that his wife was right when Annie approached him at his office and asked to use his key code. He needed to know why she wanted and she was pretty vague in telling him what she needed it for.

Apparently, Annie wants to do this mission with only Auggie as her support system. So she fights him when he brings up Joan and she invades Arthur’s questions when he has every right to ask them!

Apparently, Annie wants to do this mission with only Auggie as her support system. So she fights him when he brings up Joan and she evades Arthur’s questions when he has every right to ask them!

As for the mission, it could all blow up in Annie’s face. She’s been compromised by her relationship with McQuaid and she was on the job for barely a week before McQuaid created an acceptable story for her and she was willing to buy every word of it. Auggie was forced to snap her out of it. Well, almost. He kept Annie on her mission but her own stance on the position had changed. She no longer wanted to look for information that would bring down McQuaid – she wanted information that could exonerate him.

Annie relented on keeping Arthur out of the loop and getting his help proved to be useful. He helped her get her hands on some of McQuaid’s dealings and he even provided her a location. So she went to go check it out and to her surprise someone followed her. Caitlyn Cook, McQuaid’s second in command, knew Annie was up to no good and has been following her from the start.

Caitlyn thought Annie was still with the CIA and that she got Ryan to hire her in order to spy on him. But they were both at a place they didn’t need to be so they didn’t exactly have time to throw around recriminations. Or start a catfight.

Some armed men had attacked them at the facility there were at and they had to defend themselves. Then once that was over – they took a good long look at the place and it dawned on Annie that the place looked very familiar. Frighteningly so seeing as the bunker was mapped out to replicate a certain building in Chicago.

Caitlyn was certainly shocked by these turn of event. She claims to have had no idea what her boss was doing and she was willing to be completely open to answering any question Calder or Joan might have. Yet the case was quickly wrapping itself up on its own. Paperwork revealed that before the Chicago bombing – McQuaid’s company was on the brink of going under. Then a terrorist attacked happened and all of sudden his security agency becomes swamped with business.

So it was kind of all understandable. Greed must have played a part in what happened! McQuaid must have planned the terrorist attack to save his company but when McQuaid then went on a run – he oddly went to Annie’s place. He told her he was getting set up and that he needed her to trust her gut.

And funnily enough her gut said he was innocent!

Annie had the chance to bring in and she passed up on it. So if he wasn’t McQuaid then who’s setting him up and is anyone safe from becoming the next target?