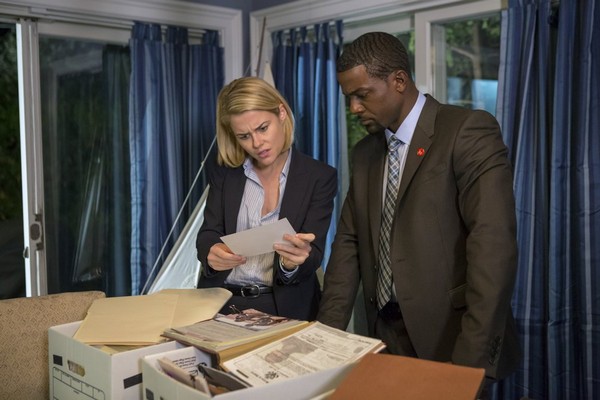 Tonight on NBC their new drama CRISIS airs with another new episode.  If last week is any indication we are putting this on our must watch list.  On tonight’s episode called, “We Were Supposed to Help Each Other” the parents’ backgrounds are probed as three of the parents set out to steal a piece of the mastermind’s puzzle from the CIA. At the mansion, Amber is the recipient of unwanted attention from a captor, and Beth Anne and Kyle inch closer to one another.

On last week’s episode after Finley (Lance Gross) and Dunn (Rachael Taylor) met with the President (guest star John Allen Nelson) and First Lady (guest star Melinda McGraw), they soon realized that the Chief of Staff (guest star Michael Bunin) was the next parent sent on a dangerous mission to save his child. At the mansion, the mastermind taught one of the hostages a lesson as they tried to escape. Dermot Mulroney, Michael Beach, James Lafferty, Halston Sage, Max Schneider, Stevie Lynn Jones, Joshua Erenberg and Max Martini also starred. Adam Miller recurred.

On tonight’s episode as Finley (Lance Gross) and Dunn (Rachael Taylor) continue to look into the backgrounds of the parents, three of the parents are tasked with using their influence to steal a key piece of the mastermind’s puzzle from the CIA. Meanwhile, Meg (Gillian Anderson) deals with the aftermath of her actions. At the mansion, Amber (Halston Sage) deals with the unwanted attention of one of her captors while Beth Anne (Stevie Lynn Jones) and Kyle (Adam Miller) start to get closer. Dermot Mulroney, Michael Beach, James Lafferty, Max Schneider and Max Martini also star.

Will CRISIS be another huge hit for NBC? Well we’ll have to tune in tonight at 10PM EST and let us know what you think. We’ll be recapping all of the action  right here for you. The advance buzz on this show has been pretty good and old X-Files fans are always thrilled when Gillian Anderson pops up somewhere. Will you be checking out the action? Hit up the comments and let us know your thoughts!

Tonight’s episode begins with Olsen talking with Dunn and Finley about the parent’s death. Dunn points out how tragic it will be to tell the girl that her parent died protecting her.

Gibson continues to torment parents with more threatening phone call. Later, when the FBI meets with those involved to provide more details. They are clear that anyone who receives a call needs to share the information with them. Later, Meg and Susie have a conversation and Susie notes how strange the change in Meg’s demeanor is as she has gone from scared to more controlling. She is suspicious. Meg questions if Susie is right for the case as she reminds her that her anger makes her careless.

As their hostages are brought downstairs, their captors provide direction on what they expect them to do with the pile of 250 thousand dollars. They are tasked with a very specific job for preparing in the money in a certain manner. The note they prepared that Ian reads for the group states that whichever group completes the most, will not be punished.

While Dunn and Finley are talking a woman runs up to them telling them of a parent who locked herself in a room. The woman said the parent was crying. They run to check on the situation. They rush down and see her through a window and beg her to open the door. Olson calls them to tell them the parent is giving an interview. They finally break in and stop the interview where she is reading a note by the captors. Once they talk to her, they realize her husband, who was also asked to do something, is still in the building. Possibly with a key or connection to the men responsible. A few minutes later, Dunn and Finley tell the parent that they realize she is not being honest as her husband is not where she says he was.

One of the boys who “broke the rules” by writing for help on the money by providing some key details was knocked out after being hit hard with the gun from one of the goons. He is not responding to those who try to help. He ends up having a heart attack. Later, Kyle’s mom comes to see Meg and shares that she will do anything to get Kyle back. Meg asks Julia to make a call for her. She needs to see what the FBI is seeing. She tells her in order to help all the parents she needs that access because the FBI doesn’t understand what they are going through and how they are being used.

Sloan’s mother, who just completed her on-air interview, continues to argue with Dunn and Finley and shares that she doesn’t have much faith in them. Ian asks Beth Anne what her dad did when he worked with the government. She shares that he was with the CIA and after a couple kids seem to think that will get them some help, it seems Beth Anne realizes how strange it is that her dad’s ties to the CIA have not helped them to be found.

The Wirth’s continue to follow the directions of the kidnappers without letting the FBI know. Meanwhile, Amber and Mr. Nash have a conversation about how nothing will be the same after this.

The Wirth’s debate with Sloan’s father about what to do. They are in the location they were told to go to and have explosives and directions for what they are to do. Mrs. Wirth arrives at FBI headquarters wearing the explosives. Finley tells her calmly that there is a sniper watching her. All at once, Marie Wirth gets pushed down by Finley in an effort to save her from the sniper’s shot. She narrowly missed being shot, but outside, her husband is shot from behind outside as he argued with Dunn about giving up the gun he had. She is not able to save him from his attacker.

Finley picks up a phone with some incriminating evidence showing US Marshall involvement. The officers on scene order him to put it down, but he already sees enough by the time they wrestle the phone back from him. Dunn interviews Marie Wirth, while Finley interviews Sloan’s father. They each find out some information from them that lead them to a specific location. Meanwhile, the kidnappers take Amber to another room and she thinks she may be able to leave. Unfortunately, they use her to record a message that shares that her best friend’s father was killed.

The hostages are told which side lost the work challenge-they won’t get dinner and must sleep on the floor. They are told to go wash up and Beth Ann is able to make it out with a small razor that was on the table near the boxes.

Meg got what she wanted and is sifting through government information trying to find a lead. As she is looking at stills on the screen, she spots a man she knows that used to work with her. She recalls, in her mind, an affair they had.

Kyle walks in on Beth Ann cutting herself and they he shares that he understands why she cuts herself and how it makes her feel. They end the conversation with a kiss. Any thoughts on what the kidnappers will do next, CDLers? Let us know your thoughts in the comments below.