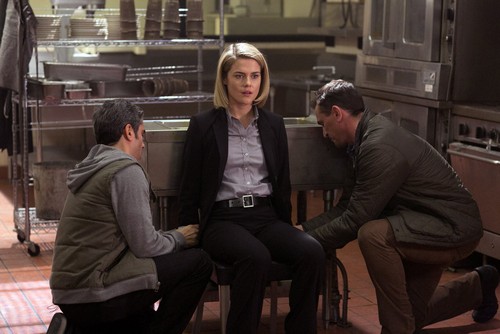 Tonight on NBC their new drama CRISIS airs with another new episode. If last week was any indication we are putting this on our must watch list. On tonight’s episode called, “How Far Would You Go” Dunn tries to protect Meg. Meanwhile, Gibson makes a demand, and Finley becomes the focus of a parent mission.

On last week’s episode seizing their opportunity to speak directly to the kidnapper, Finley (Lance Gross) and Dunn (Rachael Taylor) became one of the parent missions. Meanwhile, Widener (guest start Mark Valley) continued to collaborate with TJS (guest star Fred Dryer) on a brutal plan to take out their former associate Gibson (Dermot Mulroney). Stevie Lynn Jones, Halston Sage, Max Schneider, Max Martini, Michael Beach and James Lafferty also starred.  Did you watch last week’s episode?  If you missed it we have a full and detailed recap, right here for you.

After last week’s action-filled episode, tonight’s episode begins with Dunn and Finley trying to get in touch with Meg. It seems the threats from last week were very real and Meg has been kidnapped. Dunn is warned that any sign of an FBI agent at the meeting location she was just given, and Meg will die.

Meanwhile, Gibson gets an update on the death toll and a question for his future plans. He is urged to get out now, but he declines that offer stating that he won’t leave until he destroys Agent Widener. Shortly after, Gibson calls Mr. Vries and gives him specific instructions for how to get his daughter back, and he agrees to come alone, just then, he opens a closet door to several guns.

Dunn and Gibson’s captive Clarenbach, spills more details that pinpoint Gibson. Dunn wants to use him because he knows Gibson and used to work with him. Finley is worried that Dunn is not thinking clearly because of her sister’s kidnapping. She assures him she has a good plan and they both plan their next steps and head out.

Kyle, Beth Ann and Ian are scared as they hear pounding on the door as they still wait in the room they’ve locked themselves into. They debate their next move. In another room, Amber and Nash go through body bags looking for a possible radio left behind. Amber begins to lose hope, but Nash assures her they will find a way out.

Back at the station, Olsen is told about a possible situation where a parent is on a mission. Olsen also finds out Dunn and Finley are not together and he’s not happy. Meanwhile, Finley is meeting with Clarenbach trying to get more detail. Finley is found to be in the server room and Olsen orders an agent to go get him immediately. Clarenbach is shown a mansion on the screen and assures Finley he knows where the building is. After discussing the terms of their relationship and Clarenbach’s protection, they head out so that Clarenbach can take Finley to the secret location.

Dunn calls Olsen and he is not happy. She shares what is going on with her sister and asks him for help. When she brings up Widener’s involvement, he is very surprised.

Vrie is told to find Clarenbach before the FBI, who is now looking for him, finds him or he will not get his daughter back. Meanwhile, Finley just passed into Maryland. Too bad Vrie is tracking him and knows just where he is at.

Dunn arrives at the location and is greeted by a homeless man who asks for money. She is confused but then sees that he was sent by someone as he hands her an envelope. She reads the letter which tells her that she “just killed her sister,” referring to the fact that she toldFBI agents where she was going. The homeless man points to where the person is that gave him the letter, but he is confused, and no one is around.

Vrie gives Gibson an update on Finley’s location and he is shaken to learn he is headed towards him. The kids who are locked in the room get their hands on a radio and are getting some of the updates but it is breaking up. They start to consider that Finley may be near when they hear his name mentioned. When Vrie finds out that Finley took off on foot, he advises his driver that they need to go hunting.

Dunn is brought in and sees Meg. She is upset that she came because she’s risked her life. Dunn still will not disclose Clarenbach’s location. The two sisters are left alone for a while and have a heart to heart and each open up and talk about memories.

Meanwhile, Clarenbach is getting worried about how he and Finley are being tailed. As they hide out, they see the team of men after them. Just as a knife is held to Meg, Dunn finally relents and agrees to disclose the location of Clarenbach. She calls Finley and tells him to bring Clarenbach. Finley tells him the location of where they are, but decides it is better if the two people fighting to find him are pitted against each other. He hopes to buy Dunn some time.

Nash has an idea to try to escape and dresses in one of the uniforms from one of the men in the body bags. Just as he tells Amber not to worry, he opens the door to put his plan in play and is greeted by another one of Gibson’s men, who stabs and kills him. While Amber hits the man on the head with a shovel and knocks him out, she sees that Nash has died. Just as she hugs him goodbye, she sees the keys in Gibson’s man’s pocket, but just then another one of her captures assures her her plan won’t work and she needs to head back to her room.

Vrie arrives at Finley’s hideout. Vrie is willing to kill a man, he shares, in order to get his daughter Emma back. He begs for Finley to give Clarenbach to him. While Finley is yelling from behind boxes to Vrie, he talks to Clarenbach. Just then, Widener’s men come and gunfire ensues just as Finley was ready to put his plan into place. Finley is beaten up and Clarenbach is dragged out. Shortly after, Vrie is reunited with Emma. He cries as he holds her only a moment before FBI rushes in.

Meanwhile, Dunn takes a chance with a gutsy move and gets her and Meg to freedom, but has to shoot one of her captors.

Clarenbach is delivered to Gibson and Gibson asks if he is ready to get to work. Finley shares with Dunn that they are now very close to the mansion, so despite Gibson having Clarenbach, they are much closer to finding the kids.

Meet us here next week for all the action-packed thrills that come along with this show!