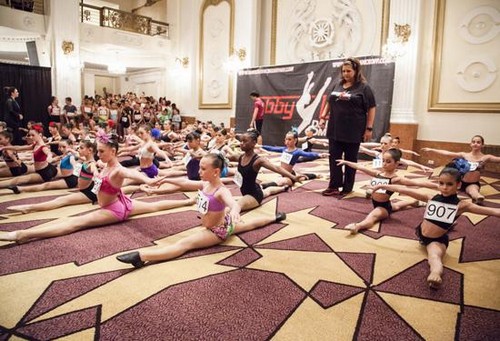 Tonight on lifetime Dance Moms continues with a new episode called, “Decisions Decisions.”  On tonight’s show Abby decides whether to make Kalani a member of the dance company. Meanwhile, Cathy takes over the reigns to choreograph her Candy Apples in hopes of finally beating Abby’s girls.

On last week’s episode  Chloe and new girl Kalani went head-to-head on the dance floor to determine once and for all who’s Abby’s go-to girl. Jill was upset when Abby promised a starring role to the winner of an improv dance off, only to revoke it when her daughter Kendall wins. Meanwhile Abby pushed Mackenzie’s pop career with a challenging solo.  Did you watch last week’s eighth episode?  If you want to get caught up you can read our full and detailed recap, right here.

On tonight’s episode after auditioning hundreds of dancers, and facing pressure from Kira, Abby decides whether or not to make her daughter an official member of the Abby Lee Dance Company. Meanwhile, Cathy takes over the reigns to choreograph her Candy Apples in hopes of finally beating Abby’s girls.

Tonight’s episode is going to be another drama packed one, which you won’t want to miss. So be sure to tune in for our live coverage of Lifetime’s Dance Mom’s Season 4 Episode 13 – tonight at 9 PM EST! While you wait for our recap, hit the comments and let us know how excited you are about the new season  of Dance Moms tonight.

Tonight’s episode of Dance Moms begins with Abby Lee and her dancers meeting at the studio after their last competition. Abby reveals the pyramid from last week, Nia, Kendall, and Chloe are on the bottom. Peyton, Maddie, and Mackenzie are on the second tier. And, as a joke Abby but a horrible picture of Kelly on top of the pyramid.

This week Abby Lee and her dancers are headed to Ohio and hope to win their 12th competition in a row. They will be going head to head against their rival Cathy and her “Candy Apples.” Abby informs the Moms that they need to bring in their white costumes from a previous competition for this week. Unfortunately, Kelly has two of the costumes, and Abby wants the other Moms to reach out to her and ask her for it. No one has spoken to her since she got in a physical fight with Abby and Abby got a restraining order against her, and no one wants to contact Kelly. If they don’t get the two costumes from Kelly, then two of the Abby Lee dancers are going to have to sit out of this competition.

Meanwhile in Ohio Cathy is training her Candy Apples, and she is confident that this week she will have what it takes to beat the Abby Lee Miller Dance Company.

It is two days until the dance competition in Ohio, and Peyton’s Mom Leslie is panicking because Peyton doesn’t have a costume. She calls Kelly and leaves her a voicemail for the third time telling her that they need the costumes back or else her daughter won’t be able to dance.

Abby Lee’s dance team is rehearsing their group dance, but Abby is in a “rotten mood” because Christi cursed her out before rehearsal. Abby screams at her team and tells them that the next one who’s Mom swears at her is off the team.

Abby is still furious that Kelly hasn’t turned over her costumes. They only have four costumes, so she is changing the group dance to a trio, and half of her team isn’t going to get to dance. Abby hits the studio and helps Peyton and Kalani and helps them with their solos for the competition. Leslie is furious that Peyton has been booted from the group dance, and Nia’s Mom points out she still has a solo, and Nia doesn’t even have that.

The dance moms have brought in all of their old white costumes from other dances and are showing them to Abby, and trying to see if they can alter them to match the costumes that they have for this dance. Leslie is furious because none of the costumes will fit Peyton, but Nia and Kalani have white costumes so they can join the trio. Abby tells Leslie that her daughter Peyton is officially kicked out of the group dance.

It’s time for the dance competition, Abby Lee and her team arrive in Ohio. Leslie begins flipping out on Abby because Peyton’s costume is too small on her, she thinks that Abby is so busy worrying about her new dancer Kalani that she neglected Peyton. Leslie says the “F Word” and Abby kicks her out of the competition, she says that no one on her team is allowed to use that language. Peyton and her Mom storm out of the dressing room and head home.

The Moms and Abby take their seats in the theater, and Kalani takes the stage to perform her first solo as an official member of the Abby Lee Dance Company. Abby is pleased with Kalani’s performance and told her Mom Kira that she can “certainly handle the pressure.”

Cathy’s Candy Apple dance team takes the stage and performs the group solo dance that Cathy is confident will beat Abby’s team. After Cathy’s team dances, Abby confesses she is a “little nervous.” She gives her solo dancers a pep talk in the dressing room and then heads back to her seat in the audience.

Abby’s team takes the stage, and the crown is screaming so loud when the music starts, that the dancers can’t hear the song. They all start at different times, and are off to a bumpy start. After the dance the girls head off the stage and start freaking out because they missed their steps in the beginning. Abby mentions to the judges that she thinks her team was “set up.”

It’s time for the winners to be announces. Kalani wins the overall first place dance solo, and Abby’s team wins the Junior Group Award. Candy Apples Cathy looks miserable in the audience. Abby and her dancers head to the dressing room to celebrate their 11th straight win.