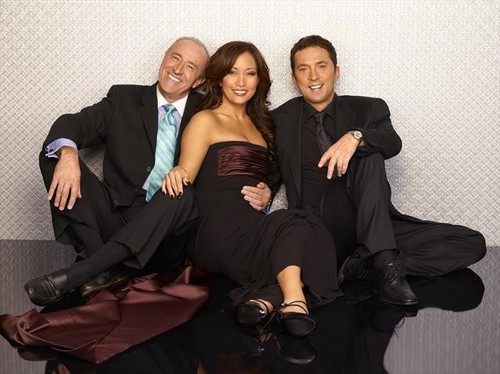 Dancing With The Stars is back tonight with a whole new episode of glitz and glitter.  On tonight’s episode another elimination occurs after the third week of performances, and Robin Roberts serves as a guest judge. The theme for the dances is “The Most Memorable Year of Their Life.”

On last week’s episode  each couple had to perform a dance style of their choosing including Swing, Tango, Jive, Salsa, Samba, Rumba and the Cha Cha. The couples face the first nerve-racking round of elimination.  They were given a surprise and were told that rather than one elimination there were two.  Additionally, “The Switch Up” began and voting guidelines were revealed live.  By the end of the evening we said goodbye to long distance swimmer Diana Nyad and former pro-hockey player Sean Avery.  Did you miss any of the performances?  If you did we have all the videos, right here.

On tonight’s episode the remaining 10 celebrities commemorate “The Most Memorable Year Of Their Life.” Each couple will dance to a song of the celebrities choosing that encompasses a memorable time or experience in their life. These heartfelt performances promise to be some of the most intense and emotional of the season.  The dance assignments for the week are: Meryl Davis and Maksim Chmerkovskiy — Foxtrot, Amy Purdy and Derek Hough — Contemporary, Charlie White and Sharna Burgess — Jive, Billy Dee Williams and Emma Slater — Waltz, Danica McKellar and Val Chmerkovskiy — Contemporary, Cody Simpson and Witney Carson — Jazz, NeNe Leakes and Tony Dovolani — Rumba, James Maslow and Peta Murgatroyd — Jive, Drew Carey and Cheryl Burke — Waltz and Candace Cameron Bure and Mark Ballas — Jive.

The show opens with us meeting the first guest judge of the season.  Robin Roberts is led onto the stage by the Chmerkovskiy brothers, Val & Maks.

We also found out that Billy Dee Williams will not be performing tonight.  They just announced that Billy Dee’s doctor will not let him dance anymore.  He has a back condition – we will be saying goodbye to Billy tonight.  He won’t be dancing the Waltz that he had planned tonight which was dedicated to his grandchildren.  Instead they had his grandchildren come on the dance floor to kiss him.. ahhh…

The dancers are dancing tonight celebrating a memorable year in their life.

James Maslow and professional dancer Peta Murgatroyd: dancing a Jive – his most memorable year is 2007 when he realized he could control his own destiny.  [VIDEO HERE]

Judges comments: Len: “What’s going on was that an earthquake or did you rock this place?  Fantastic your best dance.”  Robin: “Thank you the way you attack every dance.  Appreciate it!” Bruno: “That had the explosive energy of a lightening strike.  I cannot believe what you have achieved in three week.  It was suburb.”  Carrie Ann: “You continue to surprise me, it was wonderful.  There was one small flaw a claw but it was tiny.  That was great.”

NeNe Leakes and professional dancer Tony Dovolani: dancing a Rumba – her memorable year is the year he married her husband Greg for the second time – so she is dedicating the song to her husband – [VIDEO HERE]

Judges comments:  Robin: “Len said it best week 1 you got this party, you are the life of the party.  It was sensual and beautiful.”  Bruno: “Naughty NeNe, the Southern siren, you got your man exactly where you wanted.  Rumba is difficult for a non dancer, you did it very well.  One thing you have to better is the basics.”  Carrie Ann: “I know I have been giving you a hard time.  Truly what you did, I think it was the passion you were as large as your heart and your passion.  Beautiful job.”  Len: “When I saw the bed and  Tony naked I was worried, but you did a great job.  I enjoyed watching it.”

Cody Simpson and professional dancer Witney Carson: dancing a Jazz – his most memorable years was 2010 when he moved to America with his family for his career. He is dedicated his song to his family.  [VIDEO HERE]

Judges comments: Bruno: “Oh Cody, so refreshing so right here, so right now, so right on it.  Every age incorporates some elements that happen today.  Jazz for now.”  Carrie Ann: “That was ridiculous, that was so good.  I was eating it up, it was fantastic.”  Len: “Well Cody this was right up your alley, it was tight, it was together.  Well done!” Robin: “I love your style, your respect the dance and you make it your own, beautiful!”

Danica McKellar and professional dancer Valentin Chmerkovskiy: dancing a Contemporary dance.  2010 was her most memorable year that was the year her son Draco was born.  She wants her son to know that she will always be with him.  [VIDEO]

Judges comments: Carrie Ann: “I am sure your grandmother is smiling down you you.  That was the most sincere and delicate dance.  You told the most beautiful story.” Len: “The movement was so fluid.  That was beautiful, well done.”  Robin: “You are a wonder and a sheer delight.  I could not help but watch you, a beautiful way to express such a story.”  Bruno: “It really was enchanting, it was spell-bounding.  it was clear for all of us to see.  Wonderful!”

Drew Carey and professional dancer Cheryl Burke: dancing the waltz.  Drew’s most memorable year was 2005 when his son was born and he is dedicating the song to his son.  [VIDEO HERE]

Judges comments:  Len: “Let me say first I thought it was a charming dance, I loved your posture.  Unfortunately it got a bit muddled for while.  As I said at the start it was charming, well done.”  Robin: “You have been such a pleasant, marvelous, beautiful surprise this season.  You have blown me away with the way you have approached this.”  Bruno: “You played it straight and you went for a classic waltz.  I appreciate the work you put into it.”  Carrie Ann: “I can tell how much this dance meant to you.  This worked a bit to your disadvantage because I felt your stress.  I hope you bring back your more relaxed vibe.”

Meryl Davis and professional dancer Maksim Chmerkovskiy: dancing a Foxtrot.  Meryl is dedicating the song to everyone who helped her get on the podium.  She says the 17 years she has been skating have been a journey.  [VIDEO HERE]

Judges comments: Robin: “I love the fact that you could not choose one year, but many years.  When we look at your right now how you are gliding it was beautiful to watch.”  Bruno: “Irresistibly romantic, technical what you put into this week in week 3 is incredible.  The musicality was exquisite,:  ”  Carrie Ann: “I burst into tears, it was just beautiful.  You can tell Maks is so inspired by you.”  Len: “I loved it.  I love it when there is a soft smooth and then calm.  I tell you Meryl and Maks – M & M sweet and delicious.”

Amy Purdy and professional dancer Derek Hough: dancing a Contemporary dance.  Amy is dedicating her dance to her father who says gave her life twice: one when she was born and a second time when he gave her a kidney.  The dance is a tribute to the gift of life her father has given her.  [VIDEO HERE]

Judges comments: Bruno: “One thing I can guarantee there won’t be a dry eye in the country tonight.  It was inspirational.  I love you for what you do.”  Carrie Ann: “You really truly remind us all of what it is to be human.  The way you were able to balance on those toes made it all the more beautiful.”  Len: “It touched my brain with the level of difficulty, it was beautiful.  Well done.”  Robin: “I hope you know what you do for people when they see you dance each week.  You are letting people know they can begin again anew.”

Charlie White and professional dancer Sharna Burgess: dancing a jive. He is dedicating the dance to his Mom and Dad and his girlfriend for always being there for him.  [VIDEO HERE]

Judges comments: Carrie Ann: “That was fantastic, I loved how your worked the room.  You were perfectly in sync.  You were a little ahead of the music trice.”  Len: “You were steaming, I was beaming.  It was happy hour!”   Robin: “It was a celebration you make us so happy the way you work the stage.  Well done.”  Bruno: “It was certainly an entrance.  It was cheerful, it was delightful.  You hover across the stage.  It was incredible.”

Candace Cameron Bure and professional dancer Mark Ballas: dancing a Jive.  Her most memorable year was the year Full House ended and the year she got engaged.  She is dedicating her song to full house.  [VIDEO HERE]

Judges comments: Len: “I loved the energy, I thought it was great.  it was a proper ballroom jive.  Well done!”  Robin: “You came out so strong in the first week, the second week no so much but tonight it was wonderful!”   Bruno: “I love it when you go wild you remind me of Ann Margaret, I love to see that side of you.  A bit cleaner in the footwork. But good job!”  Carrie Ann: “I agree with what everyone said, a great jive, high energy.  I cannot believe you are not a dancer.  The one thing you have to watch is your shoulder – great job!”

No other eliminations tonight because Billy Dee Williams decided to remove himself from the competition.