BY Heather DiPietro on May 20, 2014 | Comments: 3 comments
Related : Dancing With the stars, Reality TV, Recap, Television 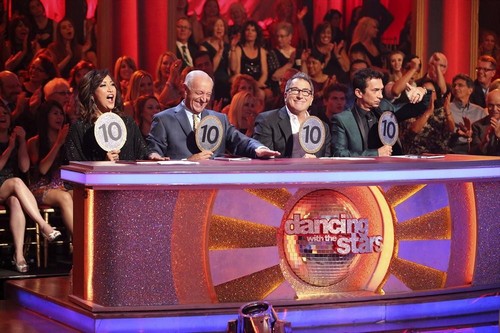 Dancing With The Stars is back tonight with a whole new episode of glitz and glitter and we are now in the final episode where someone will be crowned the DWTS champion and will win the coveted Mirror Ball Trophy. On tonight’s episode a winner is announced in the 18th-season finale, following a fusion-dance challenge performed by the remaining couples: Amy Purdy & Derek Hough, Meryl Davis & Maksim Chmerkovskiy, Candace Cameron Bure & Mark Ballas.

On last night’s episode  after nine weeks of competitive dancing spanning a variety of styles from the Cha Cha to the Foxtrot to the Viennese Waltz and beyond, Amy Purdy & Derek Hough, Meryl Davis & Maksim Chmerkovskiy, Candace Cameron Bure & Mark Ballas, and James Maslow & Peta Murgatroyd remained in the competition. These four remaining couples had one last opportunity to impress the judges and the viewers. They competed in two rounds of dance. In the first round, each couple took on the “Judges Pick” and repeated the same dance style they did the week of the “Switch-Up.” In the second round, one of the biggest competitive dances of the season, the couples took on a supersized Freestyle featuring special effects, additional dancers and unexpected surprises. If you missed it, we watched it and  we did a detailed recap of it all, right here for you.

On tonight’s episode the show will begin with a high-energy performance featuring a reunion of all 12 of this season’s couples as well as the judges. Then, as decided on by a Twitter vote, one of the three remaining couples will perform their Freestyle dance as an encore. The finale will also feature a performance to “Livin’ La Vida Loca,” by Team Loca, giving viewers at home a chance to watch the routine live with Amy Purdy, as she was unable to dance during the original Team Night due to an injury. Additionally, viewers will be treated to encore performances by Drew Carey and Cheryl Burke to “You Can’t Sit Down,” NeNe Leakes to “Grown Woman” featuring six Pro Dancers, Danica McKellar and Val Chmerkovskiy to “Be Our Guest,” and Charlie White and Sharna Burgess to “Supercalifragilisticexpialidocious.” Additionally, Olympic Gold Medalist partners Charlie and Meryl will dance together for the first time. In the last element of competition, the couples will perform a new routine as part of a “24 Hour Fusion Challenge.” The remaining couples will fuse two contrasting dance styles that they’ve performed this season and they’ll have less than 24 hours to prepare that dance for judges’ points.

Tune in tonight at 9 PM EST on ABC to watch the stars all hit the ball room. We’ll be recapping it for you live right here. In the meantime hit up our comments section and tell us who you are rooting for!

The show opens tonight with the full cast performing a dance choreographed by Mandy Moore.

We start with a retrospective of last night’s performances.

The freestyle performance that the audience decided they wanted to see again is eliminated couple James Maslow and Peta Murgatroyd.

Tonight because of Amy Purdy’s injury Team Loco was not able to perform live so they are performing their dance tonight to Ricky Martin’s Livin’ La Vida Loca.

Next up is Iggy Azalea featuring Charli XCX performing their hit “Fancy.”

Drew Carey and Cheryl Burke are dancing the Jive.

Next up is NeNe Leakes dancing with a bunch of girls, no Tony in sight.

Danica McKeller dancing the Quickstep with Val Chmerkovskiy to “Be Our Guest.”

Next up performing his single, “Surfboard” is Cody Simpson

Next up are Charlie White and Sharna Burgess reprising their Disney week performance.  They danced to “Supercalifragilisticexpialidocious.”

Amber Riley is performing next as a part of Walgreens’ “Dance Happy Be Healthy” performance of “Do Your Thing” plus her first single “Colorblind.”

Judges comments: Len: “We have heard many times how inspiration you are .  You are a fantastic dancer well done!  Bruno:  Your dancing is right up there with the bet and your determination is right up there.  You are unforgettable!  Carrie Ann: “There is so much to say I could write a novel right now .  What makes you special is you are uplifting right now.  Derek your partnership is fantastic . “

Judges comments: Bruno: “Oh yes sweetheart, what a ride it has been, we have had ups and downs and you have always been adorable.  Well done.”  Carrie Ann: “How did that feel? ”  Len: “Candace you have been the dark horse of the competition.  You have kept going, you are top with the fans.  Well done, great fusion.”

Judges comments: Carrie Ann: “Season 18 – has been phenominal we have bene doing it so long – the best thing about this season has been you two you are marvelous.”  Len: “It has been like a novel full of twists and turns and we are here at the last page.  I am not saying this is my last season but it could be. You are great.”  Bruno: “I can state a fact the earth is moving and so is it for you.  It is like you discovered the passion of your first love dance.”

Next up is Christina Perri singing her ballad “Human.”

WINNER OF THE MIRROR BALL TROPHY