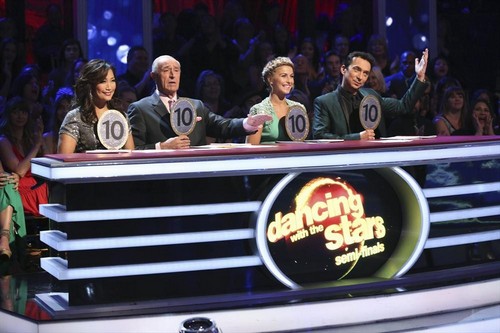 Tonight on ABC Dancing With The Stars 2014 continues with an all new Monday November 24, season 19 week 11 called “Season Finale – Part 1,” and we have your weekly recap below. On tonight’s episode the four finalists compete during the 11th week of performances, which feature two rounds of dancing: a judges’ pick and a freestyle routine. Also: Cast members from the film “Annie” will perform; and one couple will be eliminated at the end of the night.

On last week’s episode, five remaining couples advanced to the Semi-Finals and perform two routines during plugged/unplugged. The semi-finalists included Tommy Chong, Bethany Mota, Janel Parrish, Alfonso Ribeiro, and Sadie Robertson who performed two different versions of the same song. In the first round of the competition, the couples performed a Jazz, Quickstep, Samba, Paso Doble or Argentine Tango to an original or “plugged” version of their selected song. In round two of the competition, the couples performed an Argentine Tango, Rumba, or Contemporary routine to an acoustic or “unplugged” version of that same song. Special musical guests will accompany the unplugged performances including singer Christina Grimmie, who performed “Love Runs Out,” Time For Three, performed “Blame,” and YouTube sensation Noah Guthrie, performed his cover of “Problem.” At the end of the night, one couple was eliminated and four couples moved on to the finals. Did you watch the last episode? If you missed it, we have a full and detailed recap right here for you.

On tonight’s episode as per the ABC synopsis, “the four remaining couples will compete in two exciting rounds of dance. In the first round, each couple will take on the “Judges Pick” and perform a dance they previously performed this season that the judges have selected. In the second round, the couples take on the biggest competitive dance of the season, a Freestyle routine featuring special effects, additional dancers and unexpected surprises. The night continues by celebrating the new, contemporary spin on the classic show “Annie,” coming to movie theaters December 19th. “Annie” stars Oscar(R)-winner Jamie Foxx, Cameron Diaz, Rose Byrne, and the youngest performer to ever be nominated for a Best Actress Academy Award(R), Quvenzhané Wallis, as Annie. Talented young dancers will join Wallis to perform a dance to “It’s The Hard-Knock Life,” choreographed by Mandy Moore. Then, at the end of night, one couple will be eliminated based on the previous weeks’ viewer votes combined with the judges’ scores from the previous Monday night.”

Judges Comments: Len: “There was a huge improvement, it was a great way to start the show.” Julianne: “You are so comfortable now, I don’t even see Derek.” Bruno: “Everything counts and you have been the ideal student, you did everything I told you to do – but the timing was off a bit.” Carrie Ann: “I have seen tremendous improvement, but we had mistakes so I hope you kill it in the freestyle.”

Sadie Robertson & professional dancer Mark Ballas give an encore performance of their Samba performance that Len missed while he was away. [VIDEO HERE]

Judges Comments: Julianne: “I loved it the first time, but this time, I liked it even better.” Bruno: “This was wonderful, but you were slightly behind in the timing.” Carrie Ann: “I have to be honest, I didn’t expect to see you in the finals, but after that, that is why you are in the finals.” Len: “I think that beard suits Mark, the routine was just what I like, it was interesting, what a number.”

Janel Parrish & professional dancer Valentin Chmerkovskiy give an encore performance of their week six Samba that gave them their lowest score. [VIDEO HERE]

Judges Comments: Bruno: “The passion was pulsating, but you lost your balance a bit, probably because of your injury.” Carrie Ann: “You really kicked the Smaba.” Len: “I didn’t see any mistakes, it was clear and sharp.” Julianne: “It was such an honor to work with you, you did everything, you got this.”

Judges Comments: Carrie Ann: “You set the bar from day one with that dance and you did it again, it was even so much better than the first time.” Len: “You dance like Frank Sinatra sings. You have just taken an enormous step into the finale.” Julianne: “You didn’t miss anything, you did it today.” Bruno: “You have propelled the jive into inter stellar space.”

Bethany Mota & professional dancer Derek Hough dancing to “Revolution,” a performance that is dedicated to her fans. [VIDEO HERE]

Judges Comments: Len: “That was a five star freestyle.” Julianne: “You could not have done a better job, I am so proud of you.” Bruno: “You have the making of a leader.” Carrie Ann: “You danced among our top dancers, you were incredible.”

Janel Parrish & professional dancer Valentin Chmerkovskiy just want to feel everything and show the world how much they love dancing with each other. [VIDEO HERE]

Judges Comments: Bruno: “This was like a love poem, so moving, so deeply felt.” Carrie Ann: “This was different, it went inside of all of us, to me this is what being an artist is all about.” Len: “I liked that it was just the two of you.” Julianne: “The reason why it didn’t buckle, is because you are both so real, it shows the trust that you both have had from day one to now.”

Sadie Robertson & professional dancer Mark Ballas are in the lead tonight with a 78/80 but unfortunately we did not see the performance. [VIDEO HERE]

Alfonso Robeiro and professional dancer Witney Carson give an “everything” performance. [VIDEO HERE]

Judges Comments: Carrie Ann: “That was the ultimate in freestyle, everything.” Len: “It was an all you can eat buffet, I hope this is the closest that someone could win.” Julianne: “It took ten years, but it was worth the wait.” Bruno: “That is your way to tap your way to the top.”