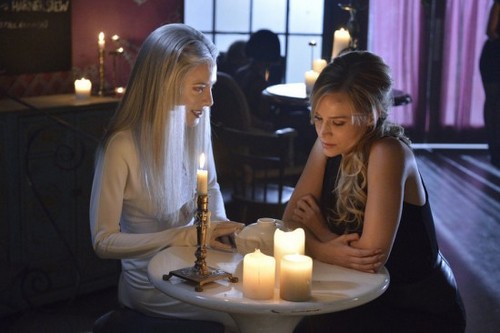 Syfy’s series Defiance continues with a new episode tonight called, “The Cord and Ax.”  On tonight’s episode, Irisa’s terrifying black-outs escalate, driving a wedge of secrecy between her and Nolan.

For those of you who are unfamiliar with the show, in the year 2046, it’s a new Earth – with new rules. Over thirty years after various alien races arrived on Earth, the landscape is completely altered, terraformed nearly beyond recognition. To the town of Defiance, on what used to be St. Louis, comes the mysterious Nolan – events begin to unfold that threaten the fragile peace this border town has fought for.

On last week’s episode Irisa returned to Defiance and was arrested. Mayor Pottinger offered Nolan her release in exchange for capturing those responsible for nearly killing him. Stahma plotted to keep Datak behind bars.

On tonight’s episode Irisa continues to experience blackouts at a terrifying and increasing rate, but she tries to keep a worried Nolan in the dark about her situation; and under Stahma’s self-appointed leadership, the Tarr family business prospers, while an increasingly suspicious Datak remains…

Defiance airs at 8 PM on SYFY and we will be live blogging it with all the up-to-the-minute details. So make sure to come back to this spot and spend the evening with us! Make sure to refresh often to get the most current details and updates!

Treasure Doll aka Dierde Lamb plays music on the radio station. She tells Alak she loves the job and offers him a fun time in thanks. He says he’s married and not his father when she persists. She says his father was one of her favorite customer and treated her rough. She asks if he can be rough with her and he throws her up onto the counter but when she asks for a taste of what he gave Skevur he stops and tells her what she heard is wrong. He says to shut up and play the records and she’ll be fine. He says if she makes trouble, he’ll throw her off the top of the arch. She smiles and says he’s hurting her. He storms out.

Rafe is cooking dinner when Alak and Stahma come in. Stahma sniffs Christie and realizes she’s pregnant. Rafe and everyone else is thrilled. Irisa is hiding in shadows and following the path of Urzu and is supposed to be following Bertie. She says she won’t and handcuffs herself to a metal grate. She gets a it of some Urzu voodoo and then finds herself atop a still Bertie with groceries spilled everywhere. Her handcuffs are broken and it looks like Bertie is a goner. Irisa is in a panic.

At Camp Reverie, Datak asks how Yewli’s finger is and she says it feels like it’s been cut off. He thinks she betrayed him and then says he realized that didn’t add up. At dinner, Rafe asks about Skevur looking for drug payback. Rafe tells Alak that he’s going to be a dad and has to be responsible. He reminds him of the time he had miners kick his ass and says he’ll do anything to protect Christie and his grandchild from his family’s gangster crap. Rafe says this is his final warning. He offers Alak a congratulatory cigar.

In the greenhouse, Pottinger is up to something. He used Yewli’s dismembered finger to open some sort of hidden safe. Later, Rafe is at the bar drinking to his new grandkid when Nolan shows up asking if they’ve seen Irisa. They haven’t and Rafe says she’s out doing teenage girl things. What she’s doing is dragging Bertie’s body through the woods. Next morning, the door opens and Nolan demands to know where Irisa’s been. He’s mad and demands an answer.

She says she won’t talk to him about it and says to deal or leave. Nolan says one day he’ll call her bluff. Rafe comes in and says Bertie is missing and never came home last night. They discuss putting together a search party. Nolan shows Pottinger a photo of Bertie and he says he doesn’t know her and doesn’t abduct servant. He asks to look at the surveillance files and he agrees.

Irisa waits while they look at the surveillance. The security chick offers her condolences over losing Tommy. Irisa says nothing. Nolan walks with Pottinger through town and he says he likes to do this to stay in touch. He says he’s seen him there with Amanda and asks if they’re close. He says if not for her he’d be in Alaska. Pottinger says he fancies her and wants to make sure Nolan is cool with that. Nolan says he never got to go to high school, but this is how he imagined it would be. He walks away.

The girl has found Bertie on the screens. Irisa sneaks up behind her. Just as she’s about to trace her, there’s an electrical surge and that’s the end of it. Alak shows up to see his dad. He tells his dad he’s tried to be the head of the family but says Christie’s pregnant. Datak says that’s good news and Alak says he’s been thinking about how that changes things and says he wants out of the family business. Datak says no. He says profits are up and there has to be a Tarr at the head of the table.

Datak wants to know if Stahma is really running things. He asks if his men are following her commands. Alak says they’re getting used to it and Datak says that’s because they’re spineless dogs. Alak says it’s not like the old world. Datak says she’s keeping him there so she can stay in control. He rants and curses in his native tongue. Alak says not to blame her – he says Datak is there because he couldn’t control himself and is a miserable old bastard. He tells him he hopes he rots and leaves.

Stahma is working as Alak stomps in. She asks for a word alone with him. She says she has something for her. She says his father brought just one thing from Casti and shows him a short laser knife. He says that’s all he brought because all he had to do was to protect what was his. She hands it to him and says he has something of his own to protect – his wife and child. She says she knows he visited Datak. He asks how she knew and she says idle gossip. He says Datak will want the item when he comes back.

She speaks their native tongue and says they both know they can’t ever allow him to come home. He’s silent. Nolan asks Amanda if she saw Bertie and says she’s missing. He asks her if he’s a bad father. She says kind of and he thanks her. He says Irisa deserves better and she says we all do. She tells him about a time when Kenya had night terrors when they were traveling. She says she found her asleep in a field of flowers that eat your flesh but that only bloom at day. She says it terrified her. She says she cried for 20 minutes then packed them up to head West. She says sometimes just not giving up is enough.

He heads home and comes in calling for Irisa. He searches through her things and flips through her diary. Tommy chews him out and calls him a bully. He says it’s no wonder Irisa doesn’t want to talk to her. Nolan found Irisa’s gloves and sees it’s Liberata blood on them. He knows she’s hurt Bertie and is devestated. He shows them to Tommy.

Pottinger gives Yewli back her finger and says she can have parole under his watchful eye back in Defiance. He asks if she can do what Irisa was talking about and she says she would need a budget and an assistant that she can trust. Datak tells Yewli later that Pottinger can’t be trusted. She tells Datak his only job as her assistant is to keep her alive. He smiles wickedly as they leave. They start the long walk back to Defiance.

At the Need Want, Amanda does some drugs and then hears some screaming. She runs out and finds a customer beating one of the girls. He says she laughed at him. She offers him free drinks and another night porter. He gets rough and she pulls a knife. He backhands her and she punches him in the face and bashes a chair over his head then kicks him while he’s down. Nolan drags her off before she kills him. He notices her pupils are dilated. She pushes away and says she’s fine. They arrest the guy.

Back upstairs, she shivers – looks like she’s detoxing. Pottinger finds Amanda in his office. She says she was caught off guard by the adreno the other day and says she wasn’t judging him. She says she uses it herself sometimes. He says he’s about to partake and asks if she wants some. She shivers in anticipation as he taps it out.

Irisa comes to Sukar and says she needs his help. She tells him she dreamed of him coming to her in the caves. He says memory is flawed. He tells her his wounds have healed but part of him has been lost. She says she doesn’t know what to do and he says Irzu’s path is a lonely one. He tells her she was chosen and Irisa says she doesn’t want to kill anyone else. He says he sees.

The fire flares up behind her and he says Irzu is speaking to her and she tells him to run because it wants her to take him. She gets the vision again and then she attacks Sukar and kills him. She staggers sadly through the woods and stares up at the sky.