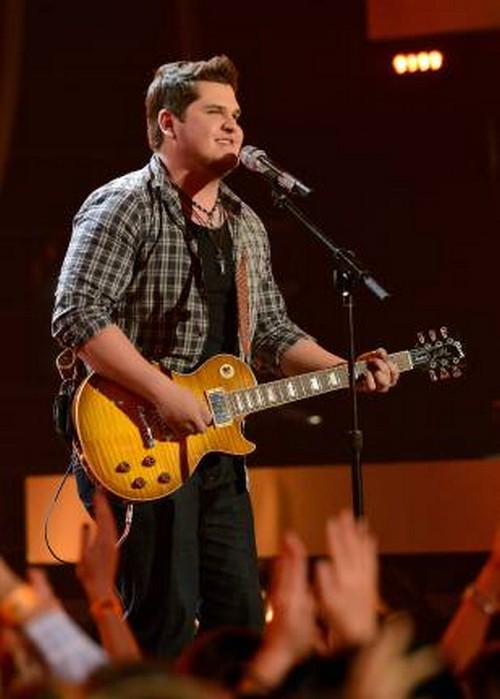 DEXTER ROBERTS sang, “Cruise”  by Florida- Georgia Line for his song choice for the “Top 10 Sings Top 10” – themed performance show tonight.   The Top 10 finalist’s song selections had to be a Top 10 song from 2010 to the present.  Did you watch tonight’s performance show?  Just in case you missed tonight’s show we have you covered and you can read our full and detailed recap here!

On last episode Dexter sang “Sweet Home Alabama” from the movie Forest Gump and Keith loved his rendition saying,  “Dexter, lovin the hair cut man.  You’re really starting to feel the thing now, and loosen up and really sing.  All you gotta keep working on is you gotta keep finding places to make it individual to you.  You cant just sing it well you gotta put your Dexterism in it.

Judges comments on tonight’s rendition of “Cruise:”  Jennifer- “Dexter, listen that wsa good.  That was really good.  Here’s the thing about doing Top Ten records, the whole crowd knows the song, and that’s your opportunity to get them to go along with you.  That’s the great thing about hit records.  So, you gotta keep the crowd with you, as well as you sang it I felt like you could have done a little more rallying to get the crowd with you.  Good job.  Harry – “I disagree with Jen, I don’t think that was a good performance.  If you are going to take a song that is immensely popular, the burden of groove falls on the band.  You didn’t do anything different.  Unless you get bigger than these songs, it is going to come across as generic.  Remember when you did Lucky Man?  That was a good performance, this was not.” Keith – “I think it was a good song choice, for you, I really do.  You are being consistent.  What I really liked about it was what you did at the beginning.  Why didn’t you stay where you were at the beginning because that was different?  You’re talented and you talent shows me what you can do, but your artistry shows me who you are.  Keep working on what you did in the beginning.”

On the next LIVE results show airing Thursday,March 20, tune in to find out who will be sent home. Additionally, international superstar andAMERICAN IDOL XIII judge Jennifer Lopez will perform her new single, “I Luh Ya Papi,” and pop rock band Royal Teeth also will perform their breakout single, “Wild.”