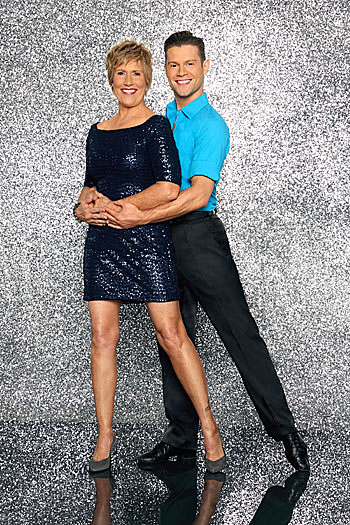 Tonight on Dancing With The Stars long distance swimming legend 64-year-old Diana Nyad and her professional partner Henry Byalikov were sent home on the DWTS season 18 episode 2. If you missed tonight’s show, you can read our full and detailed recap HERE!

On last week’s episode a new season of DWTS kicked off and Diana danced a Fox Trot for her debut dance. The judges had this to say about her performance: Bruno said, “The million dollar mermaid.  You did not do bad, you have to be a bit lighter.  You are going in the right direction.” Carrie Ann said, “You are like a slowly opening flower.  I enjoyed watching you.  That technique is going to take you far.” Len said, “If determination and the will to make it through you are going to make it.” The judges scored them a 18/30 for their performance.

Unfortunately, Diana’s luck didn’t hold this week, and she and Henry were eliminated this time around.

Sound off your comments below and tells us what you thought about Diana Nyad’s DWTS experience. Do you think Diana should have been sent home? Check out the video of her performance from tonight below!