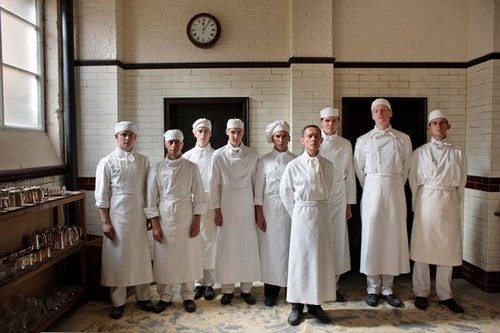 Tonight on PBS a new episode of their popular drama DOWNTON ABBEY.  On tonight’s episode as “Downton Abbey” continues, Bates attempts to learn what’s troubling Anna; Thomas finds a new ally on the staff; and Alfred takes a test in hopes of becoming a chef..  Did you watch last week’s episode?  We did and we recapped it right here for you.

On last week’s show amid the fallout of the eventful house party a trip to the bright lights of London was planned. Here Sir John Bullock showed his true colours and Rose found gallantry comes from an unexpected quarter. Gregson shared ambitious plans with Edith, taking their relationship to another level.

On tonight’s show change is in the air as an exciting opportunity for Alfred creates tension between Ivy and Daisy. Isobel appeals to Violet’s sense of charity, but it doesn’t come without a fight, and Branson considers a whole new future for himself and baby Sybbie.

Tonight’s Downton Abbey season 4 episode 4 is going to be great, and you won’t want to miss it. So be sure to tune in for our coverage of Downton Abbey — tonight at 9 PM EST!  While you wait for our recap, hit the comments and let us know how excited you are about the new season of the Downton Abbey? Check out a sneak peek video of tonight’s episode below.

Every one of the past few episodes have been real nail-biters as we all await Bates finding out about what was really going on with Anna. Tonight’s episode did not disappoint as it opens with Bates greeting, then confronting Anna once again about the deterioration of their marriage and why she continues to act so strangely. She continues to be short with him. Mrs. Hughes, upset that Anna is still being so cold to Bates, talks with her in the hallway.

Bates overhears her conversation between Mrs. Hughes and Anna, as Mrs. Hughes pleads with Anna to tell Mr. Bates about the rape. She explains that she cannot as she knows that he would not handle it well and would do something terrible. Bates tells Mrs. Hughes that if she cannot tell him what happened to Anna, he will be forced to leave Downton. She breaks down and tells him part of the story in order to keep him as she fears his departure would devastate Anna. Bates asks more questions, trying to figure out who did it, feeling strongly he knows it was the flirty valet. Mrs. Hughes attempts to get him to believe it was a stranger. Bates, heartbroken and in tears, explains he plans to leave.

Before he goes anywhere, he finds Anna alone. He grabs her hand and tells her that he knows what happened. Anna asks for details of what Mrs. Hughes told her, and Bates explains their conversation as he fishes for information to confirm Green it was Green. Anna feels relieve and explains she felt shame. Bates holds her face softly and professes his love for her explaining that nothing has changed. Crying, she allows him to hold her.

Tom explains to the family that he still feels like he does not belong. He explains that he wants to take Sybbie to America and start fresh. Though Cora does not agree with him leaving, she does understand his reasons for wanting to go to America.

Holding back tears, Mary writes a letter to Mr. Gillingham. Her weakness doesn’t last for long as she is beginning to be back to her old self as she is pushing the eviction of the first tenants in the Crowley family since it seems the opportune time since Mr. Drew has died. Robert attended the service, but the thought is that the family must go as they have not paid rent in years. After the service, the son of Mr. Drew approaches him and presents his case to plead his family’s case to stay and pay back what is due.

Despite her being against it, Violet agrees (after much pressure) to hire a local boy to work in her garden. Later, Violet feels certain that he has stolen an expensive knife. Violet later shows her frustration again with Isobel as she believes she is far too trusting.

Alfred gets an invitation to test for the Ritz. After help from Daisy and the staff, he receives notification by letter that he just missed the cut. Carson attempts to keep his spirits up. Thomas tries to share his wit and wisdom with Baxter, but his comments fall on deaf ears. Later, taking another opportunity to catch her alone, Thomas asks for details about what she has heard upstairs. He obviously has an agenda, and hopefully we’ll find out what it is soon.

Not much on the Edith front as we see her as she travels to see Gregson. Hopefully next week will have more juice on the doomed couple. Evelyn Napier pays a visit to everyone’s delight. Mary hopes he will stay with them at Downton, while Edith questions whether or not he is still in pursuit of Mary during a conversation with her father.

Mrs. Hughes explains why she told Bates in a conversation with Anna. She assures Anna she did not tell Bates that it was Green. Anna explains, to Mrs. Hughes’ delight, that she is moving back downstairs.

And in probably one of the most poignant exchanges, while talking to Mrs. Hughes, and as the ending scene, Bates makes it very clear that this is far from over. While he understands her position that she does not know who raped Anna, he is not letting this go as he states clearly, This is far from over.”