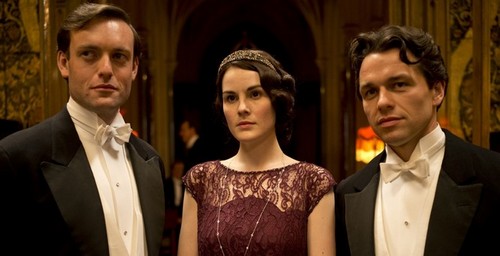 Tonight on PBS a new episode of their popular drama DOWNTON ABBEY.  On tonight’s episode As “Downton Abbey” continues, Rose’s surprise party for Robert risks scandal; Mary meets an old suitor; and Edith receives troubling news.  Did you watch last week’s episode?  We did and we recapped it right here for you.

On last week’s show change was in the air as an exciting opportunity for Alfred created tension between Ivy and Daisy. Isobel appealed to Violet’s sense of charity, but it didn’t come without a fight, and Branson considered a whole new future for himself and baby Sybbie.

On tonight’s show A birthday party is planned for Robert, but Rose’s surprise contribution to the event ruffles feathers above and below stairs. A new farming venture on the Downton estate comes with dramatic repercussions for Mary, and Edith receives more unwelcome news.

Tonight’s Downton Abbey season 4 episode 4 is going to be great, and you won’t want to miss it. So be sure to tune in for our coverage of Downton Abbey — tonight at 9 PM EST!  While you wait for our recap, hit the comments and let us know how excited you are about the new season of the Downton Abbey? Check out a sneak peek video of tonight’s episode below.

We left off last week with Mr. Bates learning of Anna’s rape, leaving us with the impression that he is going to get revenge against the man who hurt her. Tom had started discussion about his desire to move with Sybbie to America. Mary is clearly upset about Mr. Gillingham’s engagement announcement. Alfred learns he doesn’t make the cut after testing for the Ritz. Violet believes she made a mistake hiring the young boy recommended to her by Isobel after she thinks he has stolen from her.

Mary spoke to Anna and shared her happiness that Anna seems a little better, and has moved back downstairs. Later, Mary speaks with Robert about plans for Downton as he shares that he’s decided not to sell and to pay the taxes, to Mary’s delight. Mary greets her two houseguests whom she believes are there to help. She finds out that they have another agenda, and Charles Blake is actually there as he studies failing estates to secure the country’s food supply. Very upset by this, the two engage in sarcastic banter through the night, though it seems very apparent that Charles has strong feelings for Mary.

Rose asks Cora is Carson can keep a secret about the upcoming party. Mrs. Hughes, they determine, is the one who must keep the secret. Rose later visits Mrs. Hughes and asks her to help her carry out her plan for the surprise party and her secret guest. Later, Rose shares her secret with the entire staff, she hired the London band she’d recently seen, to perform. The bandleader, who happens to be African-American, arrives moments after, and the room becomes quite tense.  After the special dinner, Rose announces to her cousin that she planned the band surprise just for his birthday and almost everyone begins dancing. Later, the bandleader seems to only have eyes for Rose as he sings to her as if she is the only woman in the room.

Edith cries to Cora about her worry over Michael. She states that no one has heard from him or seen him and she is very concerned something is wrong. Edith is giving a letter that was sent to her. She is visibly shaken after reading the confirmation of her pregnancy. Edith shares a tender moment with her father as she shares her fear that Michael is dead. Despite the family’s concern about her well-being, she does not disclose her pregnancy news.

Anna cries to Bates that she feels every moment they spend together is shadowed by the tragedy. They both continually feel the pain and anguish of Anna’s rape. Later, they enjoy a nice dinner together.

Violet pokes around to find out who has had access to the stolen letter opener, to try to determine whether or not the boy that she had hired, Pegg, truly stole it or not. Isobel is very upset upon hearing the boy was let go and confronts Violet about it. As Isobel attempts to leave, she claims she feels dizzy and comes back inside asking the butler for a few moments to sit until she feels better. While alone, she fishes for the letter opener and finds it in the side of the chair. She shares with the butler, Spratt, that she’ll be leaving, but not before asking him to return the letter opener to Violet. Later, Isobel returns to plea for justice, when Violet calls Pegg into the room so Isobel would see that she had already made right on her wrong.

Robert admits that some guests spoiled the surprise party by sharing with him, inadvertently, that they would be there for the party. He is still excited for the party and tells the women not to worry that the party is no longer a surprise.

Thomas hits up his new ally to find out if she has any news from upstairs to share. Hearing that Rose has a secret that Mrs. Hughes will be involved in, Thomas tries to see what he could find out from Mrs. Hughes, but gets rebuffed upon snooping for details from her. Thomas continues his scheming ways by continually pushing Baxter into getting more information from Cora. Later, Thomas is asked to be a footman as Carson refuses to ask Molesley to come back after Alfred’s departure. Carson later gives in and makes an offer to Molesley to come on board.

Alfred plans his departure after learning that he was accepted to culinary school after all. He praises Mr. Carson and says goodbye to Daisy after some kind words as he leaves Downton.

In the last scene, Mary walks in on Rose and Mr. Ross, the bandleader, sharing a very steamy kiss.

Hopefully next week we’ll see what comes of the steamy kiss, and finally see more of Edith as she begins to uncover the sordid truth about Michael.