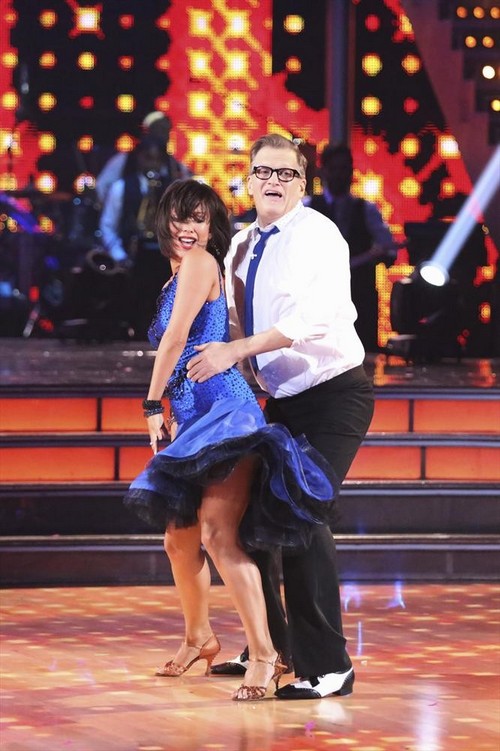 Drew Carey has been on the hunt for love ever since splitting with his fiance, Nicole Jaracz two years ago. Sure he has had a few flings but no woman has really caught his eye quite like his new DWTS’ partner, Cheryl Burke. The two have really hit it off since teaming up in early March and according to the April 14th print edition of National Enquirer, Drew has fallen hard for Cheryl.

Sources close to the ABC set say that Cheryl absolutely adores Drew, but she sees it as a brother-sister kind of relationship. He, on the other hand is working over time in order to win her over. Ever since dropping 90 pounds and proving that he can indeed maintain his healthy lifestyle, Drew has developed a pretty bold attitude and he really thinks that he eventually can win Cheryl over. He has done everything in his power to impress her and even snagged Cheryl a guest spot on his show, The Price Is Right.

Cheryl is rumored to be dating Cougar Town star, Josh Hopkins and Drew doesn’t seem to see that as a serious obstacle. Instead he views Cheryl’s fling with the 43-year old actor as proof that she likes older men and that knowledge is fueling his belief that he might eventually be able to win her over. Do you think that there’s a snowball’s chance in hell that Cheryl would ever fall for Drew? He is not at all her typical type but then, nothing really has lasted with the men who she thinks are her type so maybe it’s time for a change? Tell us your thoughts on the possibility of Drew and Cheryl hooking up in the comments below!