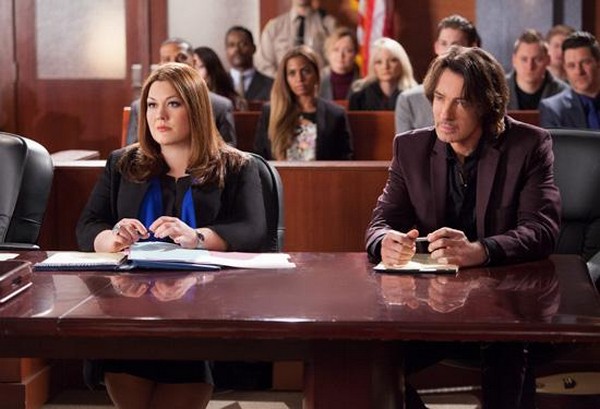 On last week’s episode Grayson was shocked and upset from his last encounter with Jane and refused to talk to her. Jane took a pro bono case helping a lunch lady fight to reinstate school meal funding for students in need. It turned out the lunch lady was a former convict who was currently hiding under a false identity. Owen got a visit from his estranged brother Nick (Colin Egglesfield). He claimed a stripper stole money from him, but the strip club was suing him for defamation.

On tonight’s episode Stacy helps Jane prepare for her date with Grayson. Jane and Belinda represent rock star Liam Summers whose recent irresponsible behavior has put his band’s next big tour at risk. Grayson represents a woman being evicted from her long time low income housing when…

Tonight’s season 6 episode 2  is going to be a great one, which you won’t want to miss. So be sure to tune in for our coverage of Lifetime’s Drop Dead Diva Season 6 season 2 tonight at 9 PM EST! Remember also to bookmark Celeb DirtyLaundry and check back here for our live Drop Dead Diva recaps, reviews, news, and spoilers!

Tonight’s episode begins with Stacy decorating in preparation for Jane’s date with Grayson. She has balloons and all the works and encourages Jane to suggest dinner tonight after Jane reminds her Grayson seemed more casual about the whole “date.”

Owen is thanked by Belinda for a great night the night before as she heads out with Belinda to meet with Belinda’s client who is a rockstar Jane loved as a child, Liam. In the courtroom, while Belinda is trying to get a deal for Liam, while Jane is flirting with him. When Belinda brings back a deal Belinda is confident he’ll be happy about, Liam is not happy to hear that he’ll have to do 80 hours of community service. Just then, Jane steps in and talks with someone she knows, asking him if Liam can do a public service announcement in exchange for dropping the charges. He agrees and Liam is much happier.

Back at the office, Teri and Grayson look over pics of an apartment complex from the client he is representing who is being evicted. Teri notices that the graffiti on the apartment building is done by a famed artist who is well known for his artistic graffiti and that his work goes for a lot of money. They start to plot while Belinda and Jane are on the other side of town escorting their high profile client out of the courthouse when reporters begin hounding him. He gets served with papers for a lawsuit and a reporter makes a snarky comment when Liam punches him in the face.

Back at the office, in a client meeting with Liam, Jane and Belinda argue with opposing counsel for the band who wants to kick Liam out. They end with telling Jane, Belinda, and Liam..they’ll see them in court.

Later, Jane runs into Grayson and invited him to dinner at her house tonight and he agrees. Jane calls Stacy and gives her the good news. In the courtroom, Grayson and his client are present and Grayson is questioning an expert on the graffiti. The expert messes up after seeing spray painted work shown by opposing counsel. He comments on the artistic value of the piece only to find (once they zoomed out) that it was actually spray paint denoting where to do construction work. Later, the judge goes off on Grayson claiming he is responsible for the vandalism on the courtroom walls where she believes he is trying to prove a point.

On the Liam case, Belinda and Jane are in court trying to defend their wild client, Liam. The band has a great deal of evidence about all the bad things Liam has done and why he should be removed from the band. It is not looking good for Liam.

Jane is at home waiting for Grayson when Liam comes over complaining that he needs help. He has no money and has been cut off from the band. Just then, Jane gets a call from Grayson that he is in jail. She rushes to help him. Grayson tells Jane that the judge believes Grayson told a graffiti artist to tag the courtroom. After she meets with him, he kisses her on the cheek. Later, in the courtroom, Grayson tries to prove his case and the judge does agree that it has been proven the art is authentic and should be protected. Just as Grayson and his client begin to celebrate, the plaintiff’s attorney shares that her client will leave the wall up, but still plans to demolish the apartment building.

Jane is in her kitchen the morning after and is talking to Stacy when Liam comes out of the bedroom wearing a woman’s robe. He talks about his sorrowful story when Jane has an idea. When she gets to work, she shares it with Belinda. Palimony! In court, Jane goes full force into proving there was such a relationship that would allow for the need for palimony. She preaches that Liam had 25 years of contributions to the band and wrote many songs with them.

Back in the office, Belinda is upset with Jane because she ordered a toxicology report for Liam. Belinda still asserts this is her client and thinks she is stepping on her toes. Jane explains that if they can show he is on drugs and was on drugs the night of the incident, they can maybe get him rehab and force the band to keep him. After checking the report, Belinda smirks as there is no trace of drugs or alcohol in his system. Jane has a new plan. She meets up with Kim, and is secretly hoping she’ll come back sooner. When Kim hints she won’t come back, Jane starts giving her the impression that she is “taking Owen for a drive.” Kim seems concerned. Just then, Jane gets a call that Liam was in a car accident and she runs out.

Back in the courtroom, Grayson reminds the judge of the plaintiff’s words about the building being the beginning of the west coast graffiti movement. He shares that the same artwork on the apartment is used in advertising suggesting this as well. The judge ends up siding with Grayson and declaring the entire building a historical landmark. All eviction notices are officially revoked.

At the hospital, after Liam tells Jane he has been sober for years and is scared because he doesn’t know what is going on with his body, the doctor walks in and is surprised to find that he doesn’t know he has early signs of Parkinsons. After Jane questions why the doctor would not have shared this information with him, he recalls that he was set up with a new doctor by the band. Jane vows to find out why he was not told about the diagnosis. At the office, she talks with Owen and they realize the manager is behind this. In court, they have the manager on the stand and find that he lied to the insurance carrier, the band members, and Liam. Jane shares they are looking into filing charges against him.

After Grayson’s client comes to thank him, she leaves him with a small paper. On it…he finds that she is the graffiti artist! He has an original piece by the famed artist and Teri is thrilled. Jane is thrilled for herself as well. She gets a pat on the back from Owen and Kim has returned. Owen share Belinda will be leaving.

Tonight’s episode ends with Jane getting a “goodnight” call from Grayson. Jane thought he was trying to get out of a date with her when he told her he had to help Kim move her items back. She was proven wrong when he called to tell her he’d been thinking of her. She replies with the same and ends the night with a very big sigh and smile.