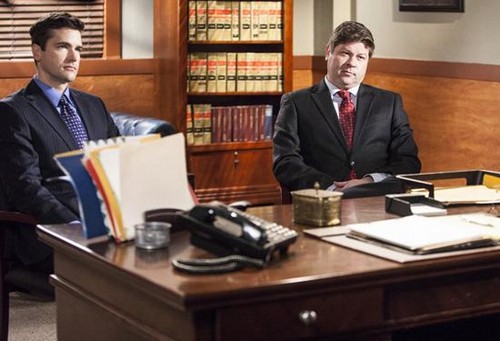 Tonight on Lifetime their critically-acclaimed hit series Drop Dead Diva continues with its fifth episode called, “Cheers & Jeers.”  On it, Jane takes a case concerning a bullied pro cheerleader. When Paul gets in trouble for accumulating too much credit card debt, Teri pretends to be his lawyer. Grayson and Owen come up with a unique strategy to defend a family who installed speed bumps on their busy neighborhood street. Jane and Grayson make plans for a romantic evening.

On last week’s episode Jane struggled with how to behave around Grayson now that he knew the truth. Grayson asked Jane to help him with a case representing a young widower who wanted to honor his wife’s last wish to be buried in her backyard, while her parents wanted her in their family plot. Lucky Paul bought a Rolls-Royce for $100 off Craigslist but found it way more trouble than it was worth. Kim returned to work and enlisted Owen’s help representing a 12-year-old foster child searching for a permanent home.  Did you watch last week’s episode?  We did and we recapped it right here for you.

On tonight’s episode Jane takes a case concerning a bullied pro cheerleader. When Paul gets in trouble for accumulating too much credit card debt, Teri pretends to be his lawyer. Grayson and Owen come up with a unique strategy to defend a family who installed speed bumps on their busy neighborhood street. Jane and Grayson make plans for a romantic evening.

Tonight’s season 6 episode 5  is going to be a great one, which you won’t want to miss. So be sure to tune in for our coverage of Lifetime’s Drop Dead Diva Season 6 season 5 tonight at 9 PM EST! Remember also to bookmark Celeb DirtyLaundry and check back here for our live Drop Dead Diva recaps, reviews, news, and spoilers!

Tonight’s episode of Drop Dead Diva begins with Staci rubbing her new Stella McCartney boots in Jane’s face.  She reveals that Paul got them for her, he hands Jane a gift as well and says he wanted to show how grateful he is to them for letting him crash.  Jane receives a text message from the office and says that a reporter from the LA Times wants to talk to her about a story.

Jane heads into the office and Teri is watching a hilarious video of a Breakers cheerleader flipping out a basketball game last night.  While they are watching the video and laughing the cheerleader from the video, named Chelsea, arrives at the office with a reporter from the LA Times.  They are here to see Jane.

Meanwhile Grayson and Owen are meeting with the Maxwell family.  They live on a street where the speed limit is 30 MPH, but cars zip up and down the road past their  house going about 50 MPH.  Last month their daughter was almost ran over by a speeding driver while she was riding her bike.  So her Dad installed speedbumps in the street by his house since the town wouldn’t answer their requests to remedy the problem.  The city sent them a letter telling them they had to remove the homemade speed-bumps, so they did.  Then the city sent them a bill for $75,000 in damages.  They can’t afford to pay it.

The LA Times reporter reveals to Jane that she was going to write an article on Chelsea’s meltdown at the basketball game.  Once she met Chelsea and talked to her she realized Chelsea may have grounds for a lawsuit.  Chelsea explains that she joined the Breaker Girls this season, and she has been bullied by the head-cheerleader Ally.  Ally calls her “fat ass” and “slut face” and one day she was eating a cookie and Ally grabbed it and shoved it down her pants and said it was “going right to her ass.”  Chelsea says she doesn’t want money, she just wants to sue and make sure other cheerleaders aren’t treated as horribly as she has been.

After Jane’s meeting Grayson asks her if she wants to hang out on Friday night.  He is going to come over and bring Chinese food and a movie, the same movie he and Deb watched the first night they had sex.  Jane rushes to her office and calls Staci and tells her to go pick her up “the sexiest lingerie” for Friday.

Jane, Chelsea, and the reporter meet with the Breakers team lawyer.  Jane informs him that it is the team’s responsibility to ensure that all of the cheerleaders are treated fairly.  She brings in Ally and other members of the Breaker Girls squad and questions them about the names that they called Chelsea, they all denied treating her badly and even went as far as to say Chelsea is “too sensitive.”

Paul reveals to Teri that he got a credit card from a nice man at the mall and he is $6200 in debt from buying Jane and Staci’s gifts.  He has to quit his unpaid internship at the firm so that he can get a paying job and pay off his credit card debt.  Teri tells him she will send the credit card company a scary letter to try and convince them to cancel his debt.

Jane heads out to lunch with the LA Times reporter Rosemary.  Jane reveals that the cheerleaders didn’t give her any good information during the depositions.  Jane says she isn’t worried because she has a surprise witness, an ex Breakers girl named Barbara that despises the squad.

Jane heads back to the office and Teri has bad news.  The Breakers Girls have sent Barbara to Tokyo as their Good Will ambassador.  Rosemary printed a story about Jane’s surprise witness and the Breakers Girls got wind of it and bribed Barbara by sending her to Tokyo.  Jane is furious, she curses Rosemary out for ruining her surprise witness and tells her to stay away from the case and Chelsea.

Grayson calls Teri out on the letter that she wrote for Paul.  He tells her that they could lose their insurance if bar association found out she was impersonating lawyers.  She reassures him that she never sent the letter, but she really did.  After Grayson walks away Paul reveals that he mailed the letter an hour ago.

Owen and Grayson meet with the Maxwell family.  They are out of options, the city won’t drop the fee and they are preparing to put a $75,000 lien on their house.  Owen has a plan.  If they are in a different country the government can’t fine them.  He wants the Maxwells to succeed from the United States and turn their property into their own country with their own laws and call themselves the Democratic Republic of Maxwell.

Jane heads to court with Chelsea.  The Breakers lawyer destroys her when she takes the stand.  He reveals that Chelsea violated her Breaker contract by sleeping with one of the members of the basketball team.

After court Chelsea reassures Jane that it was a mistake and it only happened once.  Jane asks Chelsea if there is anyone else who could back up her story about she was treated.  Chelsea doesn’t know any one, and the other cheerleaders won’t go against Ally.  Ally decides who gets to do Breaker girls appearances, and the girls she chooses get paid $400 an hour, so they don’t want to upset her.

Teri receives a call from the credit card company, they want to meet in person.  Paul thinks they should ask Jane for help.  Teri tells him she is going to hand it and to go book her a conference room for the meeting.

Staci arrives at home and finds Jane working.  Staci asks her if she is going to have sex with Grayson during their date.  Jane is nervous, because Grayson might expect sex from Deb.  Staci gives her a pep talk.

Jane and the Breakers’ lawyer meet with the judge in her chambers.  Jane reveals that she wants to go after the Breaker girls under the RICO act, because they are racketeering.  Ally is the don, and Chelsea refused to kiss her ring so she got thrown to the fishes.

Teri meets with Paul’s credit card company and manages to convince them to cut up the card and forgive his entire balance, by threatening that they didn’t do diligence and check to see if he had any income.  However, Grayson catches her walking the credit card company’s lawyer to the elevator and he doesn’t look happy.

The Maxwell family misses their meeting with Owen and Grayson, they call them on video chat.  They reveal that they tried to leave their driveway and a US border patrol officer told them they couldn’t enter the US without a Visa.  And, the city turned off their water and their electric since they are no longer a member of the country.  Owen tells them to “hang tight” and reassures them “it is not over.”

Staci visits Jane at the office and brings her champagne and grapes.  Staci reminds her that the first time she had sex with Grayson Deb brought champagne and grapes.  Jane is adding up all of Chelsea’s receipts for her dance classes, outfits, hair, make-up, etc.  She is trying to get the Breaker Girls to reimburse her.  She discovers that Chelsea hired a publicity firm two days before her televised melt-down.  Jane realizes it was all staged and Chelsea played her and made the whole thing up.  Owen tells Jane she can ask the judge to remove her from the case, but she can’t go public with the story.

Owen meets with the Maxwells and the city attorney.  The city supplied the Maxwell family with Visas.  First Owen declares war on the US and then he admits defeat and surrenders on behalf of the Maxwell family.  Under a US war act the US must supply countries that they go to war with funds to rebuild.  The US attorney agrees to give the Democratic Republic of Maxwell $75,000, coincidently the amount of the lien..on their house.

Jane leaks the truth about Chelsea’s lawsuit to Rosemary, the reporter at the LA Times.  Chelsea loses her lawsuit and is charged with purgery for lying about how she was treated.

Jane heads home for her big date with Grayson.  In mid date she receives a phone call from Teri, who has been arrested.  Grayson apparently tattled to Kim that Teri was impersonating a lawyer and Kim had her arrested.  Jane flips out on Grayson and heads to the jail.  She manages to get some of her charges dropped so she only has to stay in jail for two weeks.  She reassures Teri that she didn’t ruin her date with Grayson, but the truth is Jane kicked him out before she rushed to help Teri.