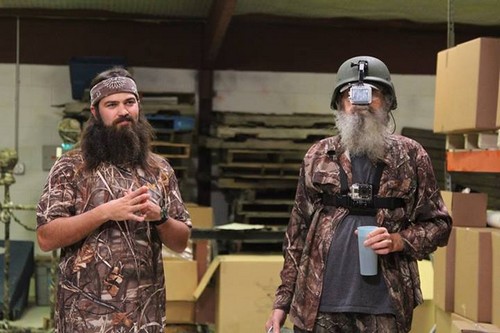 Tonight on A & E America’s most recognizable family is back for a funny, functional, and family-filled Season 5 episode 3 of DUCK DYNASTY called, “Life of Si”  On tonight’s show Si records a day in his life.

On last week’s episode Willie hired Korie’s cousin as a personal assistant, but Jase rebelled against the idea of having an outsider giving orders to him and the guys. Si organized a boring, confusing treasure hunt for Jep’s children to keep them occupied while Jessica gets over a cold.

On tonight’s episode it is all about Uncle Si.  After seeing footage Jep shot using GoPro Si decides he wants to use the camera to record a day in his life.  But when Si gets on the guys nerves while they are hunting, they kick his GoPros out of the blind.  Meanwhile, Willie gets lost while taking John Luke and Sadie to a football game.

We will be live blogging the season 5 episode 3 of Duck Dynasty tonight at 10PM . . . so make sure to come back to this spot and watch the one hour show with us. Make sure to refresh often so you get the most current info! While you wait for the episode let us know how excited you are about the return of Duck Dynasty.  While you wait for the recap, check out the sneak peek of tonight’s episode below!

Tonight’s episode of Duck Dynasty, “Life of Si,” starts off in the Duck Commander office. Si is amazed by the video Jep made. Si thinks he is a “techno nerd,” whenever he needs to record something on his VCR he calls Jep. Si wants to make his own movie, a “Duck-umentary” about the world through Si’s eyes.

It’s hunting season, so it is hard for the guys to concentrate at work. Godwin and Martin are pushing each other around on forklifts in the warehouse while Si records everything with a video recorder attached to his army helmet, and another recorder strapped to his chest. Jase wants to go hunting, but Si has to go to the bathroom first. They tell him to turn the camera off, but he doesn’t.

At Korie and Willie’s house, Willie is ecstatic. His friends got sick, and gave him three tickets to the LSU game. He is going to take John Luke and Sadie with him, they aren’t as ecstatic about it as he is.

Back at the warehouse, Si is still in the bathroom, and Jep is trying to explain the Golden Girls (the TV show) to Jace. Meanwhile Si is filming a documentary in the bathroom, “the old tea comes out, the new tea goes in.”

Willie, John Luke, and Sadie are en route to the LSU game. They are running behind schedule due to 58 miles of construction. His kids are ready to turn around and go home because they are hungry, but Willie decides to “weave” through the traffic jam and take a “shortcut.”

Martin, Godwin, Jep, Jace, and Si are hunting, and Si thinks it is an ample opportunity to make his first “epic war movie.” Jace junts wants to “’hunt some deer,” and has had enough of Si’s movie.

Willie, John Luke, and Sadie are lost in the middle of nowhere. Their GPS won’t stop “recalculating” and keeps telling them to take a “U-turn.” Willie gets out of the car to get some signal on the GPS and drops it. He decides to just “Navigate by the sun.”

Back on the hunting trip, Si’s “epic war movie” has turned into an Oprah Interview. Yes, Si is playing Oprah. Jap and Jace kick Si out of the deer-blind. Si is on his own now, so he is going to film a “survival movie.”

Sadie and John-Luke have had enough, their Dad is driving in circles and they are starving. Willie is determined to get to the LSU game though.

Si, Jeb, and Jace head home. Their hunting trip was a bust, but Si got some great footage for his movie “For Your Eyes Only.” Si is sure his movie is going to be an “instant classic.”

Willie, John-Luke, and Sadie have finally admitted defeat and pulled over in the middle of the road. They are listening to the LSU game on the radio and grilling hotdogs on the side of the road.

Miss Kay serves the rest of the Robertsons dinner, and they all take time to be grateful for the “little things.”