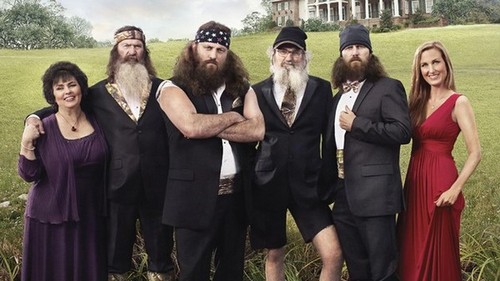 Tonight on A & E America’s most recognizable family is back for a funny, functional, and family-filled premiere of DUCK DYNASTY called, “Governor’s Travels.”  On tonight’s show Willie receives a commerce award from the governor of Louisiana in the Season 6 premiere.

For those who are new to the show, Duck Dynasty is an American reality television series on A&E that portrays the lives of the Robertson family, who became wealthy from their family-operated business, Duck Commander. The West Monroe, Louisiana business makes products for duck hunters, primarily a duck call called Duck Commander. The Robertson men—brothers Phil and Si, and Phil’s sons Jase, Willie, and Jep—are known for their long beards and their Christian views.

On tonight’s episode, when the Governor of Louisiana announces that he will be coming to Duck Commander to present Willie with a commerce award, John Luke volunteers to give the introduction speech. But Willie can’t help but give John Luke some public speaking pointers, along with Si’s unwanted help. Meanwhile, Miss Kay enlists Korie and Sadie’s help to pick out a nice outfit for the visit, trying to convince a reluctant Phil to give his opinion on her outfit options.

We will be live blogging the premiere of Duck Dynasty tonight at 10PM . . . so make sure to come back to this spot and watch the one hour show with us. Make sure to refresh often so you get the most current info! While you wait for the episode let us know how excited you are about the return of Duck Dynasty.

RECAP: The season premiere of Duck Dynasty kicks off tonight with Willie’s kids John Luke and Sadie arguing over which one of them farted while they are eating. Willie thinks they need to stop screwing around, because John Luke is introducing the governor tomorrow and giving a speech at an awards ceremony at Duck Commander. John Luke reassures Willie that he is “going to have the speech whipped in to shape by tomorrow.”

At the Duck Commander warehouse Godwin, Martin, Jase, Sy, and Jep are playing basketball. Jep says his “game is tight” and he prides himself on “being in touch with the younger generation and knowing who Dr. Dre is.” Willie and John Luke arrive and Willie reprimands them for playing basketball when they are supposed to be cleaning the warehouse for the governor’s arrival tomorrow. Sy says he is going to “make sure the warehouse looks tight.”

Back at the warehouse Willie is helping John Luke prepare his speech for the governor. He is determined to make him the best public speaker yet. Or at least make sure he can get the words out of his mouth. Sy arrives and insists he is going to get John Luke ready for his speech, he thinks Willie is the last person that should be teaching people how to speak on stage since he sounds like R2D2.

At Phil and Miss Kay’s house Kori and Sadie return with Kay and have her model her new outfit for Phil. He says, “Bingo, that’s the one.” Kay gets annoyed because she doesn’t think he is even looking at her. She proceeds to try on four more outfits because she can tell he doesn’t mean it.

Meanwhile outside the “political roadies” have set up all of the chairs and the stage and podium for the governor’s appearance. Jep and Godwin have a rap battle on stage, and then John Luke arrives. He says that Willie and Sy are “getting in his head” over his speech. Jase says that the last two people he should be getting speech advice from are Willie and Sy. Jase reassures him that every one has a nervous twitch and he doesn’t have anything to be worried about.

Willie storms in to the warehouse telling his guys to clean up before the governor arrives, and he realizes that the Governor was playing basketball with them and slipped in the back door without even saying “hi” to Willie.

It’s time for John Luke’s big speech, and the chairs are full outside of Duck Commander. John Luke takes the podium and nails his speech and introduces Governor Bobby without a hitch. The Governor presents The Governor’s Award For Entrepreneurial Excellence to Willie.