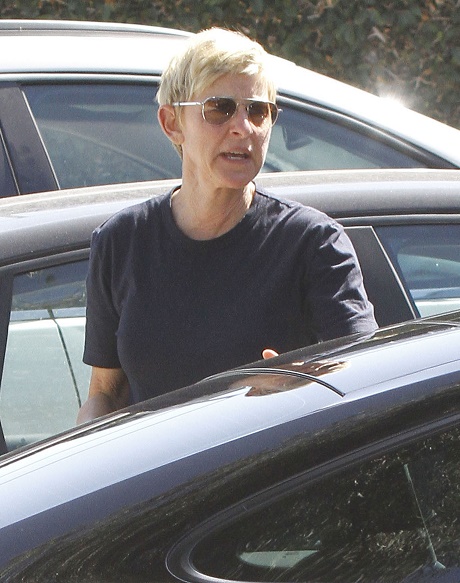 Ellen DeGeneres and Portia de Rossi’s imminent break-up and divorce looks to be back on. The power couple recently made headlines when they failed to appear at a charity event they had scheduled for the Saving Spot! Organization on October 26th. Rumor has it that the Ellen and Portia got in a huge screaming match en route to the event and turned their car around and went back home. Ellen, always the control freak, in charge of her wife and  marriage, and is already trying to spin the story and insisting that she and Portia told the coordinators of the charity they wouldn’t be able to attend days in advance.

One would think that, since Portia de Rossi is finally sober, their marriage would be back on track. But, it looks like Portia’s sobriety has actually had a negative effect on their relationship. When Portia was high, she was weak and insecure, and allowed Ellen to manipulate her and control her. Now, Portia’s sobriety combined with her role on the hit TV show Scandal has given Portia the boost of confidence she desperately needed, and she’s not taking Ellen’s crap anymore!

According to the November 17th edition of OK! Magazine, “Ellen would control every aspect of Portia’s life – form her career to her social circle – but now that Portia has a role on one of TV’s hottest shows, she’s stepping out of her wife’s shadow for the first time in their six year marriage, which has Ellen seething. In addition to boosting her self-esteem, the new role also keeps Portia away from home more often. Ellen can’t stand that Portia isn’t always available when she calls or texts her, they’re had massive fights over it.”

Success seems to be a serious issue for Hollywood couples, and has caused multiple celebrity divorces. For some reason, celebrities have a tough time accepting when their partners become successful or more successful than them, instead of just being happy for them and proud. Ellen has always wore the pants in her and Portia’s marriage, and she is clearly threatened by the fact that Portia now has her own leg to stand on. What do you think — are you Team Portia or Team Ellen? Shouldn’t Ellen be happy for Portia? Let us know in the comments below!