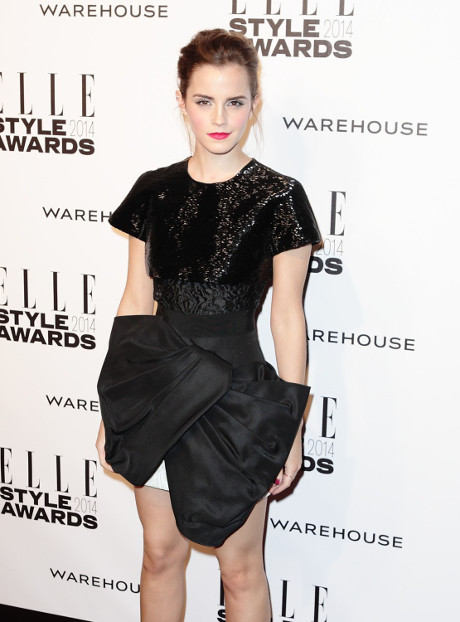 Emma Watson is claiming that director Darren Aronofsky dehydrated the cast of Noah when he banned the use of plastic bottles on set. According to Emma: “Everything we used had to be recycled or recyclable. Having no water bottles on set at five in the morning, when you’re exhausted and delirious, wasn’t ideal. I was so tired one morning I picked up a mug from my trailer and drank some stagnant water that had been there for the duration – so three months. I was so ill.”

Additionally, Watson is claiming that Afronksy is such a brutal task master that he insisted she work through an illness. “I came in the next day and was like: ‘Darren, I don’t think I can do this, I’m really sick,’” she said. “He was like: ‘Use it for the scene.’ And I turned round to the bus and was like: ‘Is he joking? He is joking right?’ and there was deadly silence.”

So, basically, since the director of the film took an environmental stance and banned bottled water and because tap water is beneath her, Emma Watson refused to hydrate herself. That’s how I am reading this. I suppose it was unfathomable to scurry to the nearest dollar store, buy a Rubbermaid reusable container, and fill it at the nearest faucet. Am I the only one who is shocked at the stupidity and entitlement of this interview? I used to really like Emma Watson; I always got the idea that she was just as smart as Hermione.

She seemed grounded and intelligent and, let’s face it, she wasn’t running around Hollywood mounting anything with a twig and berries. She sounds extremely unprofessional and amateurish in this interview. Did she expect Darren to halt shooting because she was sick from a lack of designer water? Nowhere in the interview does it say that water was banned — just water in plastic bottles. Were there no water fountains or taps? All of these productions have craft tables. Does she mean to convince us that there was every snack known to man, including Skittles probably separated by color…but no water?

It also doesn’t seem that shocking that Darren would expect his actors to work through an illness. I’m sure all the greats had times when they weren’t feeling their best and it probably enriched their performance. That’s how you get those accolades, sweetheart. It must have been torture to play make believe and be forced to drink the water of commoners. Movie directors are so MEAN. Next they’ll expect actors to brush their teeth before kissing scenes!

What do you guys think of this Emma Watson diva moment? Is Emma being a brat? Sound off in the comments section below.