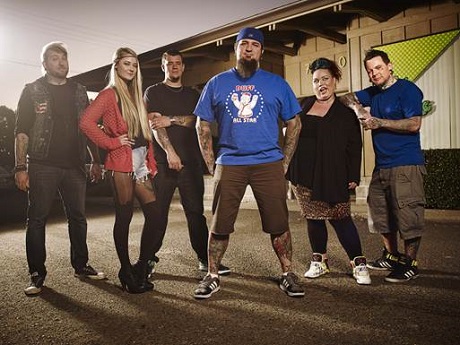 On August 20th, something epic is about to surface on the A&E Network, and it is so new and different from anything we’ve seen in the past that viewers won’t be able to look away. This grand occasion is the premiere of Epic Ink, and it’s unlike any other tattoo show around. It’s completely out of this world and, as you’ll come to find out, totally geek approved!

Epic Ink promises a look inside a true cutting edge tattoo shop, Area 51, which employs some of the most talented tattoo artists in the world, including five tattooists who are part of the small group of artists licensed by LucasFilms to tattoo their properties. The artists specialize in comics, cartoons, and fantasy ink, proudly serving the sci-fi enthusiasts and nerds of all types that travel from near and far to have ink done by Area 51 artists.

A&E gives us a glimpse into the group of talented artists at Area 51, “Chris 51 is one of the most well-respected tattoo artists around and the proud owner of Area 51, located in the hometown of his most beloved cartoon family, The Simpsons. Welshman Chris Jones has been nominated for three-consecutive Tattoo Industry Awards for Best UK Male.”

Wild child Heather Maranda is a self-taught artist who specializes in hyper-realistic tattoos that appear to jump out of the skin. Josh Bodwell combines his love of geek culture and tattoo art into custom realism and portraiture tattoos and is a walking encyclopedia of sci-fi trivia. After early run-ins with the law, Lifelong sci-fi fan Jeff Wortham looked to tattooing to turn his life around and now travels the globe to tattoo at sci-fi conventions. Rounding out the group is receptionist Caroline Russell who serves as the “’Nerdio translator’ between the full-fledged geeks and the rest of the world.”

Trust us when we tell you that this is a fun and interesting crew! We know this firsthand, as CDL had the unique opportunity to talk with the entire cast and we have all the exciting details about the show just for you! We wondered what sets Epic Ink apart from other tattoo shows.

Chris 51 shared, “It is very different. It is everything you expect to see [in a tattoo show], and everything you have never seen before.” Heather Maranda chimes in, “…and there is NO drama!” The team adds that while they take their artwork seriously, “we don’t take ourselves seriously.” Chris 51 adds that the show will be “very positive and enlightening. No sob stories and dead portraits.”

The group chuckles in agreement because, as any viewer of a current tattoo show knows, it has become very common to have more heavy-hearted stories that many times include a portrait memorializing the death of a loved one. Not on Epic Ink, however, as the group promises that the topics they chat about, as well as the customers they serve and their stories, are 100% authentic. That is very refreshing! Heather Maranda agrees about the lighter tone Epic Ink takes by adding, We’re all just a bunch of geeks!”

Josh Bodwell shared the story of how this incredibly talented group of artists came together, “because of our nerdy, geeky tattoos, we all travel at the same conventions together, so it was very natural to gravitate toward each other. It felt very natural to have our home base at Area 51.” After excitedly describing the wall in the shop that is “oozing with pop culture,” he adds that the shop is the “perfect climate for us to come together as a team.”

His words seemed very genuine as the group seemed to get along so well together and really had a good time being around one another. The group promises that there are no stories forced on customers and that everything the viewers see is what it is. They shoot completely “raw and natural” so they can truly show what a normal day is really like in a popular tattoo shop.

Despite all the fun, the artists do keep a busy schedule. When asked how many tats they do in a month, the fun group had some interesting answers that, in the hilarity that ensued from the responses, helped us learn just how close this group is and how authentic their enjoyment of working together is.

As Heather shared, “How many [tattoos] in a month? I don’t even know how many I do in a day!” The group all began chiming in with some funny responses, “seven,” and “42…we do 42 and then we’re done,” and “never more than 51 at Area 51.” The artists got along so well and had such a fun time coming up with the number of tattoos they conquer in a month that it was a few moments later when they were able to share that it is hard to give an exact answer as one tattoo may take an entire 12 hour day, while they may finish three or four in one day. Okay, guys, we get it now! And we cannot wait to watch!