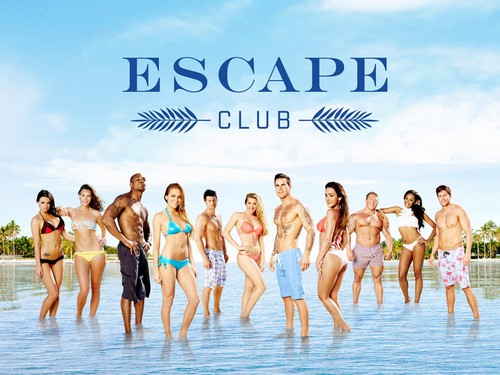 Tonight on E! ESCAPE CLUB premieres with it’s first episode called, “You Can’t Escape Your Life.” On this evening’s episode, twelve twentysomethings escape to a paradise getaway in the premiere of this reality show.

For those who’ve never heard of “Escape Club”, it is a one-hour, real-life soap opera where men and women abandon their lives and head off to a luxurious paradise on the beaches of the Dominican Republic looking for a new destiny. In this ultimate high stakes escape, these chosen 12 were picked from thousands of people looking to run away from their daily lives and start over. They were offered a once-in-a-lifetime opportunity to change their destiny forever: forget their worries, leave all their stresses behind and escape from their jobs, relationships, families and friends. However, they soon see that the island has some surprises in store for each one and once they arrive, they realize that with anything that sounds too good to be true, it usually is.

On tonight’s episode Twelve twenty-somethings escape to a paradise getaway in the premiere of this reality competition, which finds them fighting to stay at the resort and dealing with the unexpected arrivals of people from their lives back home.

Tonight’s premiere of Escape Club is sure to be great, tune in at 10PM EST to E! to watch all the action. We will also be recapping the episode right here for you!

The season premiere of Escape Club kicks off with the lucky twelve people who were selected to “escape from their lives” and stay at a secret get-a-way together arriving at the beach paradise. When they arrive they learn that it is actually a competition, and the winner will earn an awesome prize.

The contestants all begin mingling and getting to know each other, and Lisa, a cocktail waitress from Vegas, makes everyone drinks. Whitney is automatically attracted to Andrew, once she starts chatting with him she learns that he is actually a professional stripper, despite the fact that he has a law degree.

The contestants head down to the pool and are shocked when they find a card explaining to them that they are actually competing in a game and the winner will receive an all-expenses paid vacation for a year.

Later that night the contestants find their dining-table set and covered in food; they all sit down for dinner together. They take turns going around the table and sharing why they came on the Great Escape. Jesse automatically gets under some of the other players’ skin because he won’t stop interrupting people and talking over them. Meagan unleashes her crazy side and begins screaming at Jesse to shut up; Lisa out-crazies Meagan and threatens to stab him with her fork.

Later P’Etra and Aundre sit down and spend some time together on the hammock and get to know each other. Meagan and Matt get close in the pool and are the first couple to start making out. Meagan is determined not to have sex with him on the first night. Whitney heads to bed with Andrew, the stripper.

The next day everyone wakes up and learns they are spending the day on a yacht and going to a private beach. They have so much time partying on the yacht, they begin to forget that it is an actual competition. Jesse shocks some of the guys when he confesses that he showers on cameras and does webshows for money.

After a day in the sun, they all board the yacht and head back to the house. When they arrive at the house they find a letter waiting for them. It says, “Hope you enjoyed your day, because tomorrow night you will have to decide which member of the escape club will have to check out permanently.”

The guys, Lisa T. and Whitney automatically form an alliance and decide to try to oust Elly. Donnie and Meagan begin campaigning and trying to save Elly, they want to vote out Stephen because they think he is a douchebag.

It’s elimination night, and all of the players sit down for an awkward and tension filled dinner. They have to decide how to hold the eliminations. As a group they opt to do it anonymously, and they all write the name of the person they want to evict on a piece of paper, Survivor style. P’Etra volunteers to read the votes aloud. Stephen is shocked and blind-sided when P’Etra begins calling his name out. Unfortunately, their plan backfires and there is a tie. So, they decide to have Elly and Stephen both plead their cases and then revote.

Elly’s speech is a mess, and Stephen appeals to their weak sides and cries that he doesn’t have a job or any money and he wants to stay. Elly snaps and interrupts Stephen and says that he is just acting and then begins calling Whitney a “bitch” and an “evil troll.” She storms off while everyone is voting for the second time.

Aundrea reads the votes aloud again, and this time Elly has been eliminated. Lisa is sad to see her go, but she feels like Elly just dug her own grave by lashing out and causing a scene during the voting. Before Elly leaves she curses out Whitney and says that she has hundreds of thousands of dollars and a fiancé and she doesn’t need the escape club. Then, Elly boards a boat and leaves the escape club for good.