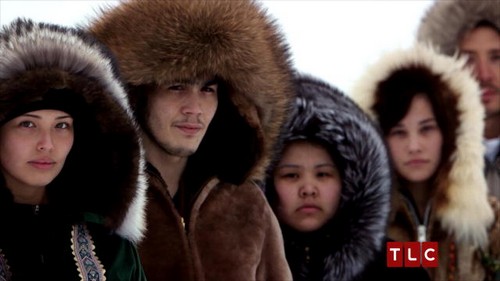 Tonight on TLC Escaping Alaska returns with an all new Thursday September 25, season 1 episode 6 called, “Igloo of Lies & Finding Frank.” On tonight’s episode five Eskimos set out to San Diego, but only three return to their native Alaska to face their families and the truth.

On the last episode, the “family” worried and came together as one of their own disappeared. Low on funds, Q got creative; Nuala had a gay time making friends and pondered her future. And a visit to an Indian reservation made everyone homesick. Did you watch the last episode? We recapped it all right here for you.

On tonight’s episode five Eskimos set out to San Diego, but only three return to their native Alaska to face their families and the truth. Mary tries saving her relationship with Tory, Tamara faces her lies, Frank’s disappearance is explained and Q surprises Nuala.

Eventually the producers of the show had grown so concerned about Frank’s well-being that they ended up driving to his home in Alaska to see for themselves if he was alright. However, once they go there they noticed that Frank’s home appeared to have been dismantled. As a whole, the house he shared with his siblings looked in a worse shape than when he was barely making ends meet. And it’s not like Frank hadn’t sent money back when he was in California!

Then for the Alaskians in California, another house was being dismantled – the one they created when they all went to San Diego together. Nuala is staying behind and all of her friends (plus Q) are returning home. They never really felt like they had belonged in the lower 48 and despite getting a girlfriend – Q also missed home. Though he did find a way around that seeing as he and his girlfriend talked about a long distance relationship and his girlfriend has even agreed to go visit him in Alaska soon. Currently, they’re thinking about sometime in the summer.

It’s just Nuala down in sunny city and she likes it so much – she doesn’t think she’ll ever be ready to leave. And so Nuala figured it was time to tell her family the truth about where she’s been. Like the others, she had been lying about her location. Her family thought she was seeking work inside of Alaska and instead she had left the state entirely. Hence when she did finally confess to what she did to her stepmom – the other woman was very angry. What if there had been an emergency?

These are concerns any family would worry about! Though Nuala’s mom was also quick to forgive when she realized how much Nuala wanted to stay. So chose in the end to give Nuala her blessing.

And as for Frank, he came home and found out that his family lost the house. They hadn’t been doing so well since he left and the younger kids didn’t have anyone to look after them because their mom was out of the house a lot. Hence his sudden and dramatic return to the fold.

Frank doesn’t regret leaving, but now that he’s back he wants to put his family first again. For while it’s merely going to be him bringing in the much needed cash so he’s currently focusing on heading back to work. And his trip to the lower 48 is shaping out to be one of a kind experience – as in never to be repeated!

Some of Frank’s friends even share the same opinion and were planning on staying in Alaska. Tamara and Q don’t wish to leave. They’re happy where they are. But Mary has already made plans on going down to the lower 48 again.

Her boyfriend proposed to her the second she came back and after some deliberation she decided to start a new life with him Portland. At first she was nervous about losing her family yet she wanted to have a new family with Tory. So though her family was hurt she lied to them – they ultimately had to learn to let her go.

Tamara also told her family the truth about where she was staying and it’s wasn’t as bad as she feared. Once her grandmother forgave her so did everyone else.

Months later, Frank changed his mind about what his family needs and he went back to San Diego. I know, right! But he makes more money down there and that’s what his family really needs from him. Like, sure, he feels guilty about leaving again and yet he hated the cold when he came home. And that’s pretty much the main description for Alaska.

And then there was Q. He and his girlfriend were surprisingly still together and discussing her possibly moving to Alaska. That’s how committed she is. If any further sign on that score then all you need to know is that she never questioned his little people expedition. She actually went on one of them with him.

Also Q wants to go back to school to earn his degree.

As for Nuala, she’s still in San Diego and she’s finding a place there for herself.

So the end of this story is that only two of the natives went back to Alaska! And the rest of them are enjoying the change in seasons!