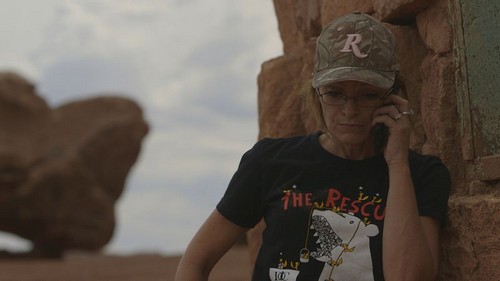 Tonight on TLC their new reality show ESCAPING THE PROPHET premieres with a new episode called, “A Family Torn Apart.”  Escaping the Prophet documents the efforts of former FLDS member Flora Jessop as she helps families flee the community.

We will follow Flora Jessop on her mission to take down one of the most reportedly dangerous polygamist cults in America. Flora, a social activist, an advocate for abused children, and the author of the 2009 book Church of Lies, endured extreme physical, mental, and sexual abuse during her life in the church, until she escaped at the age of 16. Now, she works closely with law enforcement, the Attorney General of Arizona, and a network of inside informants to help rescue runaways and extract victims within the community, as well as to help empower families who chose to stay and fight. Using her difficult memories and her passion to help others, she works to deliver justice to the very people that she feels wronged her.

On tonight’ show Flora returns to the infamous FLDS town of Colorado City to help Lenora, a single mother, escape with her six kids. Lenora is prepared to leave, but her heavily indoctrinated children refuse to follow, and even attempt to undermine plans. Flora Jessop escaped from the FLDS many years ago. Now, her mission is to help others get out and start a new life.

The series premiere of Escaping The Prophet opens with Aunt Jenny, a former FLDS member. She tries to draw out her Family Tree, but is struggling because it is riddled with incest and polygamy.

Laura Jessop, another former FLDS member was raped by her own father when she was 12 and impregnated. Now, she is on a personal mission to bring down Colorado City and help more members of FLDS escape. Laura is the “surrogate daughter” of Aunt Jenny.

Laura receives a phone call from a FLDS member named Lenora. Lenora wants to leave the FLDS, she thinks her children are in danger. The FLDS has taken control of her 6 children, and has terminated her parental rights. Laura agrees to meet with her.

Lenora pays Laura a visit at Aunt Jenny’s house. She reveals that her transportation and her communication has been restricted by the FLDS. And, she thinks that the local police are being paid off by the FLDS to turn a blind eye to what is going on with her family. Her ex-husband’s family is the local police in Colorado City. She is afraid that her children are in danger because of what they have witnessed and that the FLDS wants to “exterminate” her children (kill them). Laura agrees to help Lenora and her six children escape from Colorado City.

Laura heads to Lenora’s house to meet with her kids and see how they feel about leaving the FLDS. Jessica, Lenora’s 14 year old daughter is less than thrilled to see Laura. She doesn’t like “strangers in their house” and she wants to go live with her father. Little does Jessica know her father is the reason they are in danger. Lenora’s kids sit down for dinner and Laura joins them. Jessica’s 15 year old brother Roy isn’t happy to see Laura either. He talks in riddles, called “priesthood speak” and refuses to answer her questions.

After dinner Laura looks over Senora and Roy’s paperwork for their domestic violence cases. They were both charges with assault and abuse because they beat their Mom Lenora with sticks and pulled their hair out. Senora and Roy don’t think they did anything wrong, they are taught to be violent by the FLDS.

Laura sits down with Lenora’s kids to set up a list of “family rules.” Roy refuses to participate, he keeps talking in FLDS code and keeps saying “no one is compelled to counter-offer their right to contract.” Laura is disgusted with Roy, she says she is “done” and storms off.

Laura receives a phone call from Lenora. She is upset because people are breaking into her house, rearranging her furniture, and stole her house keys so she can’t lock her doors. Laura pays her friend Brandon a visit, and fills him in on what is happening at Lenora’s house, he agrees to go with her to help her change the locks on Lenora’s doors. While they are trying to change the locks The God Squad (FLDS security) begins driving around Lenora’s house in circles.

The next day Lenora calls Laura and asks for help. Her daughters ran away to their father’s house, and they won’t come back. Laura calls Lenora’s ex Sam, and he is completely cooperative. He agrees to hand the kids over to her. Laura is skeptical, and concerned, it is strange that Sam is so willing to work with her.

Laura and Brandon sit down to have a chat with Sam. He says that Lenora is crazy “and her brain articulates things that aren’t real.” He says that everything Lenora says is “completely created.” Sam swears that he has “never gotten violent” with Lenora. Laura doesn’t believe him though, his brother is the Chief of Police in Colorado City, so he gets away with everything.

Laura receives a phone call from a safe-house. They have room for Lenora’s entire family. They have to leave tonight though, or the safe-house will go to another family. Lenora starts packing, but her children are making it difficult. Roy doesn’t want to leave, and he is telling his sisters not to leave either.

Laura sits down with Roy and tries to talk him into moving. She manages to talk Roy into helping them pack the car and moving to the safe-house. Laura is getting nervous, the God Squad is circling Lenora’s house. She is scared that Sam sent them to kidnap his kids so they don’t leave Colorado City.

They finally get everyone packed in the car, and hit the road. They are en route to the safe-house, and a new life.