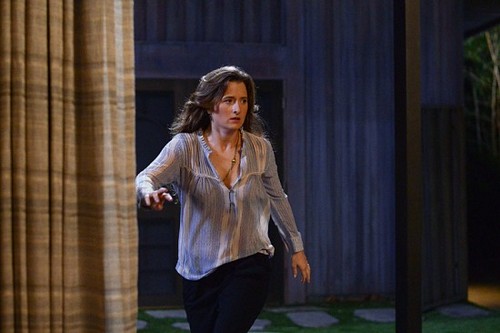 Tonight on CBS Steven Spielberg’s Extant starring Halle Berry returns with an all new Wednesday September 10, Season 2 episode 12 called, “Before the Blood.” On tonight’s episode Molly comes face-to-face with her offspring and realizes she may be the only one who can stop the impending danger. Meanwhile, Julie uncovers dark secrets about Odin.

On the last episode as the offspring’s powers grew, Molly learned of painful path to immortality. When Sparks started to have doubts about the mission, Anya took charge. Meanwhile, Odin tried to secretly access Yasumoto’s s Ethan’s circuitry. Did you watch the last episode? If you missed it we have a full and detailed recap, right here for you.

On tonight’s episode, When Molly finally comes face-to-face with her offspring, she realizes she may be the only one who can stop the coming danger. Meanwhile, Julie uncovers grave secrets about Odin.

RECAP: Katie is back and she’s starting to talk about what happened on the ship. Yet something is off about her. For instance, she admits to abandoning her former crew once they started to kill each other which is the truth but then she tells Glass that she put herself in a coma on an escape pod. And there’s the lie.

The Katie from the video said she was prepared to die. So there was nothing about an escape pod. If there was then her father would have went looking for her and frankly her survival after nearly two years in hibernation is just too miraculous to be real.

If she had gone to anyone else’s ship they would have questioned her story but she went to Glass. And the two of them had history. Hence, beside her father that is, he’s the best man that would get so swept up in her return – he’d blind to everything else.

And that’s unfortunate for Molly. Her son had used her to enter codes into the ISEA system and because of that no one knows what he’s planning on. Or if there’s even a plan in motion. So Molly thinks there could be an explanation behind of it besides the obvious. However John has suddenly switched sides on her.

John no longer thinks of the offspring as a part of Molly – he sees it as a potential threat. And he tries his best to get Molly to see the threat as well. And though she wanted to ignore him, Molly went looking into what the baby made her do. She tried therapy to help unblock her memory and once she did – she learned she turned a ship around.

The warning message Molly had inadvertently sent out had turned Glass’s ship around. So not only did it put him on the direct path to finding Katie but also, according to Sparks (who changed sides at the last minute) the ship is heading to earth in order to crash. Yet Sparks doesn’t know why the offspring wants the ship to crash – just that he does – and now Sparks wants to stop him because he can’t lose his precious Katie again.

Molly has given up her ideas about her “son” though. Even as she’s seen what choosing personal desires over common sense has done to a man like Sparks – she still thinks her baby needs his mother. And so she ignored the warning signs and nearly let him into the house when he arrived at her door. But thankfully Ethan is too smart to be fooled (by anyone) and he chased the other boy away from the house.

Odin had given Ethan a detonator he pretended was a special alarm. One that Ethan was supposed to use if the boy ever felt scared and wanted to contact Odin. Odin had sent himself up as a hero to the little boy and Ethan’s parents as the villains.

He made Ethan believe his parents wanted to shut him down and yet someone was able to re-instill Ethan’s trust in his parents. And that was Julie. She talked to Ethan and reiterated to him that he was loved. So once she was done assuring him she asked who told him such lies about shutting him down.

Julie had never grilled Odin about his backstory. She had just accepted into her life and thereby gave him access to Ethan.

It was only when she was done with Ethan and had looked into Odin herself that she realized how dangerous he was. Odin isn’t even his real name. It’s an alias he uses because his actual name could easily be linked through an internet search to terrorism on technology. Apparently, he’s infamous.

So Julie went running to the Woods’ house to warn them. But what she ended up finding was John in a trance and Ethan and Molly missing.

The offspring was at the house and after Ethan had chased him away – Molly ran after him. As for Ethan he took his bike out afterwards to probably de-stress. So things were chaotic to say the least. Thankfully, everyone was soon found and there were no injuries but the family now know they aren’t safe.

Molly had finally gotten the chance to talk to her son earlier and the offspring warned her about the others. It seems like everything he’s done so far was because he was commanded to do it. And the others of his kind have a plan of their own. They want to come to earth and so the offspring told Molly the rest of them will soon be needing bodies.

He wanted Molly to leave with him and she couldn’t. Though she loved him – she couldn’t leave the rest of the human to their deaths. So she stayed behind and came up with a plan of her own. Molly believes she’s the only one that can stop the oncoming invasion – so she’s going back into space.

She thinks she can stop whatever it is that tore out of Katie’s stomach and that is currently walking around on the ship with her face.