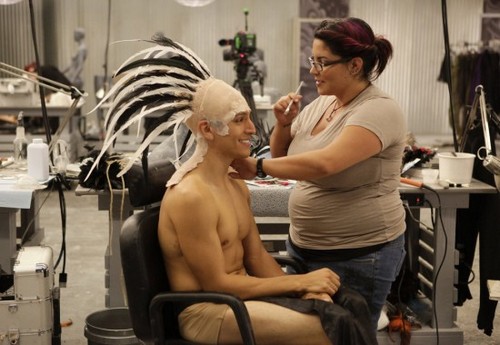 Syfy’s smash hit and acclaimed unscripted series FACE OFF continues with a new episode tonight called, “Open Sesame.”  If you have not watched the show before Face Off  is back for a bold and extreme sixth season. Fifteen up-and-coming special effects make-up artists are introduced, all eager for the opportunity to achieve success in the competitive special effects makeup field. A

nd in a Face Off first, the contestants travel to the other side of the globe for a special episode shot in Tokyo, Japan, where they are tasked with creating a stylized anime character based on their own alter ego.

Returning to the lab for the new season is actress and host McKenzie Westmore, along with judges Ve Neill (“The Hunger Games,” “The Amazing Spider-Man,” “Pirates of the Caribbean”), Glenn Hetrick (“CSI: New York,” “The Hunger Games,” “Heroes”) and Neville Page (“Avatar,” “Prometheus”). World-renowned makeup artist — and McKenzie’s dad – Michael Westmore resumes his role as the official contestant mentor.

On tonight’s episode Wands provide inspiration for wizard characters created by the remaining nine contestants.  The will have to summon a wizard to help them out.

Face Off season 6 episode 7 airs at 9PM on SYFY and we will be live blogging it with all the up-to-the-minute details. So make sure to come back to this spot and spend the evening with us!  Make sure to refresh often to get the most current details and updates!

Tonight’s episode will prove magical for the artists as there is a magical/wizard theme. The girls talk about being the only three girls left. The artists are in Hollywood and arrive at the Magic Castle. The final nine walk through the historical location right to the stage and listen to their next challenge. They each get a wand that they have to design a character for.

The artists all get busy on sketching their wizard designs. They head back to the lab to begin sculpting. Niko’s creation combines wizard and robot. Rashaad has a spiky-sharp barbed-wire look, Daran is going for a warlock look. During the walk-through, George shows his progress and is reminded to make sure he doesn’t forget good detail. Graham is working with a skull look that represents an emaciated man. Niko is told his robotic man looks more Neanderthal. Niko is getting really frustrated and feels lost.

The designers have 10 hours today, but despite the time, Chloe underestimates how long the intricate design she is doing will take. Graham is taking his time to produce something really unique. Tyler feels very inspired by the challenge and is making a lot of progress. Chloe is getting worried as she has spent so much time on her design but is realizing she may not have the time to pull it off and may have to change her direction.

Cat is working on the huge petals for her design. Tyler is starting to see his wizard come to life and he is pleased.

Application phase and the models begin to arrive. George’s model tells him the face mask he put on him has started to burn. He luckily was prepared and had another to work with. The models are slowly transforming in each artist’s dream. Corinne and Cat are painting as fast as they can as time is running out.

Now time for the judging. One artist will be eliminated tonight. McKenzie introduces the judges Glenn Hetrick, Ve Neill, and Neville Page.

The judges begin to take a closer look at each design after seeing the initial look.

Rashaad, Daran, and Graham are safe and get to head back to the make-up room. Corinne explains that she went with a tribal look. All the judges love her paint job. The Peruvian skull was excellent. Chloe is told she went heavy-handed and that she didn’t tie the look together. George is told he showcases sophisticated design. Glenn describes it as gorgeous. The metalized skin is stunning, says Ve. Cat explains Flora, her creation. Glenn says he only likes the leaves. Her makeup was described as looking like a disease. Ve said she was very disappointed. Tyler gets kudos from Ve because it was really well designed and put together. The bark and branches gave it an authentic look. His metallic look was not right. Niko made the wrong choice because he did not know his subject well enough. The artists head back so the judges can deliberate.

Corinne and George are commended for the makeup. They like Tyler’s sculpting and creativity. Chloe grabbed the wrong element of the design. Cat’s make-up looked thrown together. Niko was sloppy.

The artists come out to hear the judges’ comments. The winner of the night is George. George, Tyler, and Corinne can go back to the make-up room. Chloe, Cat, and Niko are in the bottom and one will go home. Cat was eliminated. Whose design was your favorite? Weigh in below!