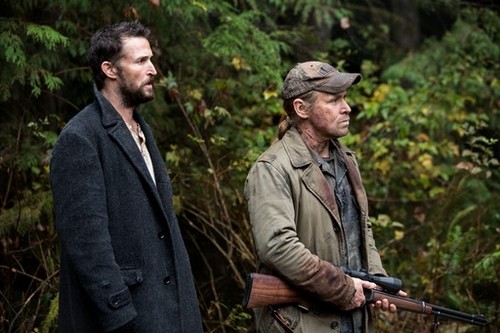 Falling Skies returns tonight on TNT with a new episode at 9PM EST called “Door Number Three”. On tonight’s episode, Tom reunites with his family and the 2nd Mass, but the reunion celebration is cut short when Lexi falls victim to a health crisis. Before long, her illness stirs up tension within the ranks as family members clash over how best to treat her.

On the last episode Tom encountered two enigmatic strangers, who attacked his family, then lead him on a violent odyssey. Meanwhile, Hal tried to find a safe place for the remaining Volm and 2nd Mass; and Lexi and Anne clashed, triggering perilous consequences. Did you watch the last episode? If you missed the episode we have a full and detailed recap, right here for you.

On tonight’s episode after months apart, Tom finally reunites with his family and the 2nd Mass. But the joyous reunion is cut short as Lexi undergoes a health crisis tied to her hybrid DNA. The crisis pits family members against one another as they fight over how to deal with Lexi’s illness. Anne goes to great lengths to save her daughter. Treva Etienne, Jessy Schram and Robert Sean Leonard guest-star.

Tonight’s sixth episode of season four Falling Skies is going to be great. You’re not going to want to miss a minute of the action and we’ll be recapping it live for you as well. While you’re waiting for the episode to begin hit up the comments and tell us your thoughts about the show.

Tonight’s episode of Falling Skies begins with Ben having nightmares. Maggie barges in and informs him that their prisoner escaped, and they think Lexie set him free. While they are out searching for the overlord, Ben and Anne run in to Hal and his men. Tom and Waver’s group arrives as well. It’s a 2nd mass reunion.

Meanwhile, Lourdes arrives with a tray for Lexi and finds her sleeping in a huge webby cocoon. Ironically, Anne is busy breaking the news to Tom that Lexi is “changing.” All of the men that are returning home begin going crazy in the streets, eating all the food from the market they can get their hands on.

Tom comforts Anne and tells her that he is here now, and he is going to take care of everything. Lourdes comes outside and tells them that “something wonderful” is happening to Lexie. They rush inside and see the cocoon and Anne freaks out and tries to cut Lexie out. Tom stops her and warns her and says that they can’t cut her out, it might hurt her, they need to find out why this has happened to her. Anne says the overlord is to blame, she knows he is responsible, and reveals to Tom that Lexie was convinced the overlord was her father.

Anne and Tom bring in Dr. Kadar to look at Lexie in the cocoon, he says there is no way they can cut her out, it will kill her. Tom says that people can obviously get out of the cocoons, because Anne was in one before and she is alive now. Unfortunately Anne doesn’t remember anything about that time. She confesses she has been having nightmares about Karen and she thinks she is beginning to remember.

Dr. Kadar gives Anne a shot of a drug that is supposed to put her in to a dram state so she can remember when she was in a cocoon and how she got out. Anna has a flashback of her first child Sam, and wakes up screaming because she couldn’t save him. So, she is determined to take Lexi. Against Dr. Kadar’s recommendation, Anne takes more of the drug and puts herself in to another dream state.

Meanwhile, Tom is staring at Lexi’s cocoon. Weaver gives him a pep talk and reassures Tom that Lexi will be fine. He touches the cocoon and burns his hand badly.

Outside in the dark Maggie is holding a meeting, she announces that Lexi is dangerous and can “control the heavens,” she also reveals that she was meeting with overlord and helped him escape. Hal listens to Maggie’s speech, and seems convinced that she is right and they should eliminate Lexi. Tom walks in on their meeting and is furious with Hal, he screams at them that none of them will be touching Lexi until they know what is happening to her and what she is capable of.

Anne has another dream state. She is remembering Karen holding Lexi, Karen informs Lexi that the only reason she is keeping her alive is because when Lexi is an infant she needs human contact from her mother to sustain her. Karen informs Anne that she created Lexi and when she is grown she will help her fight the war. Meanwhile Dr. Kadar can’t wake Anne up from her dream state.

Tom enlists the help of Lourdes to make sure no one hurts Lexi. Lourdes informs him that no one will hurt Lexi. Lourdes thinks that she is the link between Espheni and the humans.

Meanwhile Hal learns from Volm that when Espheni’s come out of the cocoon they are dangerous and violent. Volm lost nine men when an Espheni hatched and they tried to take it down. Volm advises Hal to get his men and get as far away from Lexi as possible.

Weaver and Tom watch in awe as the cocoon begins smoking and growling. Outside Maggie and her men are trying to get in to destroy Lexi and the cocoon. Lourdes rushes to the door and refuses to let them in. Tom draws his gun and guards the cocoon, he gives a speech about not crucifying Lexi for freeing the overlord until she comes out of the cocoon and explains herself. Maggie caves and joins forces with Ben and Tom to help them protect Lexi. Hal doesn’t budge though, he is ready to protect his people from Lexi by “any means necessary.”

Dr. Kadar still can’t wake Anne up. She sees Lexi in her dream, and Lexi informs her that she can’t be saved and she doesn’t need to be saved. She is going to save Anne, and she will “always choose her family.” Anne finally wakes up and rushes and tells Tom that Lexi isn’t going to hurt them, and she will come out when she is ready. Anne touches Lexi’s cocoon and it doesn’t burn her, inside the cocoon Lexi opens her eyes and puts her hand up to touch Anne’s hand.