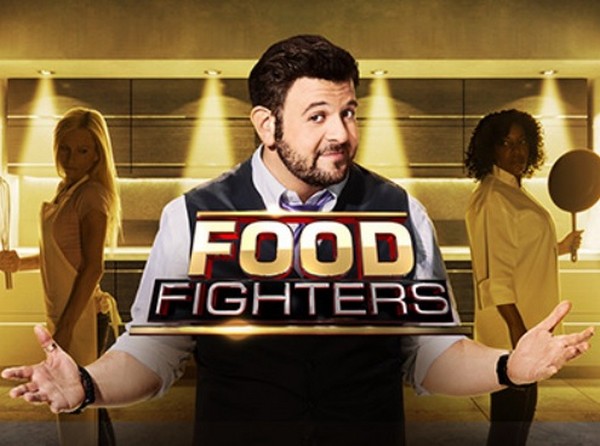 Tonight on NBC their new cooking show FOOD FIGHTERS airs with their premiere episode. On tonight’s episode called, “Elisha Joyce” a married mother of three is the contestant in the series premiere of this reality-competition show in which amateur cooks prepare their signature dishes in culinary battles against professional chefs. Adam Richman hosts. Appearing: Lorena Garcia.

For those not familiar with the show, Food Fighters it’s the perfect recipe for the ultimate food battle when the best amateur cooks in America put their signature dishes to the test against five professional chefs.

On tonight’s episode WORLD CLASS CHEF LORENA GARCIA GUEST STARS — It’s the perfect recipe for the ultimate food battle when the best amateur cooks in America put their signature dishes to the test against five professional chefs in this high-stakes culinary game. Armed only with their treasured family recipes, they’ll square off against an expert chef who will have to cook the same dish. The completed dishes will then be sampled in a blind taste test by culinary judges known as “The Dinner Party.” If the home cook wins, they earn a cash prize. Even if they don’t win, they still get to face off again against another culinary expert, climbing a money ladder with increasing cash prizes for every professional chef they knock out. This week, a married mother of three tries to win up to $100,000 as she faces off one by one against five culinary pros, including acclaimed celebrity chef Lorena Garcia. Television personality, author and food enthusiast Adam Richman (“Man Vs. Food,” “Fandemonium”) is the host of this series that takes culinary sparring to an exciting new level.

Will FOOD FIGHTERS be another huge hit for NBC? Well we’ll have to tune in tonight at 10PM EST and let us know what you think. We’ll be recapping all of the action right here for you. In the meantime, hit up the comments and let us know your thoughts!

RECAP: Tonight we have our home cook Elisha Joyce, she has never been taught to cook professionally or worked in a kitchen; she has only work for her kids who she believes are some of the biggest critics. Elisha grew up in a tin shack when she was a kid and has a lot of influence from her origins; she is ready to take on a professional chef. The first chef Elisha is agains tonight i Kevin Belton, he is confident that that his skills will surpass Elisha’s. Elisha chooses that she wants to first cook Egg Rolls and dipping sauce, Kevin feels like he can take her down.

The food fight beings and the two are getting started at cooking their dishes, Elisha chose the egg rolls because she believes that Kevin probably won’t be as good at egg rolls as she is. Elisha is having some problems with her egg rolls; though keeps at it and believes her egg rolls could fall apart easily. Their times is up, the judges are simply food lovers; the people decide what they personally think is best. The judges decided the winner of the food fight is Elisha; she wins $5,000.

Elisha is ready for her next showdown, next it’s Jonny Giordani and he is primarily focused on Italian cuisine; Elisha has decided she wants to make fish tacos and salsa against Jonny. Jonny hasn’t made many fish tacos so he’s ready for the challenge himself. The two go and get their ingredients; Elisha feels like it’s second nature for her to make these tacos. Elisha has a problem on the grill, she didn’t oil it so her fish is sticking to it horribly.

Their fish tacos are done, though Elisha is really not proud of how hers looks; the judges are now eating their tacos. The winner of the fish tacos food fight is Elisha; Jonny said he was totally thrown off with fish tacos and admit he was not confident with it. Next up is Michele Ragussis, she believes she can cook absolutely anything and doesn’t plan to lose against a home cook.

Michele feels very confident and tells Elisha’s family that she will beat their mom; Elisha is going with a mango tart next; Michele is pretty sure can make this tart even though she is more a professional with fish. Elisah loved making pies when she was pregnant, she ate a ton of them; she is so excited for this round. Michele isn’t even measuring; she never really makes deserts and comments Elisha’s choice of dish to make. The judges are now eating their mango tarts and the winner of this food fight is Elisha, making her win $15,000 now.

Elisha is no going against chef Marcel Vigneron, cooking is his life and it is in no way a hobby. Marcel has a couple of tricks up his sleeves. Elisha chooses to cook Chicken stew with rice, she hopes her mothers recipe can beat a professional chef. Elisha use a coconut fried rice for hers, wanting to give it that exotic feel to it, Marcel is cooking his rice into some coconut milk. Elisha’s chicken doesn’t look cook when it’s done and puts it in the broiler; she wanted a cripsy skin but it’s just not working.

Now the judges go ahead and eat the chicken stew, the winner of the chicken stew food fight is Marcel; Elisha now only has $30,000. Her next chef is Lorena Garcia, she has three cooking shows in Latin America; what’s left is Salmon and Quinoa. Lorena is super confident with this dish, Elisha is going to work hard to make her kids proud in this fight.

The chefs are really getting working really hard and Elisha is so nervous; she feels that Lorena is a huge challenge. The winner of this final food fight is Elisha winning a total of $60,000.