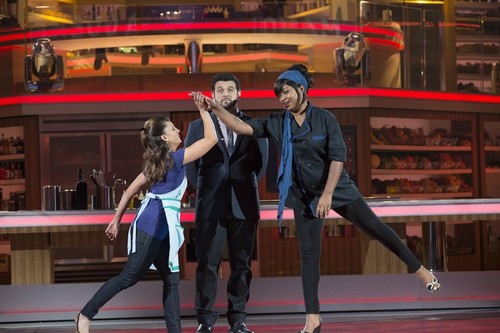 On the last episode it was the perfect recipe for the ultimate culinary battle when America’s best home cooks put their signature dishes to the test against five professional chefs. Last week, a U.S. Army sergeant and father of seven tried to win $100,000 going up against culinary experts specializing in everything from Italian dishes to California cuisine before facing off against world-class chef Cat Cora. Did you watch the last episode? If you missed it we have a full and detailed recap, right here for you.

On tonight’s episode it’s the perfect recipe for the ultimate culinary battle when America’s best amateur cooks put their signature dishes to the test against five professional chefs. This week, a high school teacher tries to win $100,000 going up against culinary experts specializing in everything from seafood to Haitian cuisine before facing off against celebrity chef Jet Tila. Adam Richman hosts this series that takes culinary sparring to an exciting new level.

RECAP: Tonight’s episode of Food Fighters begins will feature Melissa Clinton, a New Jersey native who comes from a long line of Italian women. Melissa will have to compete against five professional chefs and if she beats all five of them she will win $100,000.00.

The first chef Melissa will be going up against is NY sandwich artist Josh Stone. Melissa challenges him to stuffed chicken and mashed potatoes. They both have twenty-five minutes to put the dish together. Melissa is confident because Josh doesn’t know about her secret ingredients, ground sausage and pesto filling. Time is up and Josh and Melissa have to send their dishes to the blind taste test to see who wins the stuffed chicken competition. The results are in and Melissa is victorious so she has won $5,000.00 so far.

Now it’s time for Melissa’s $10,000.00 challenge, she will be going up against Haitian chef to the celebrities, Manouschka Guerrier. Melissa challenges Manouschka to make meatballs and ratatouille, they have twenty-five minutes to finish the dish. Manoushka is in trouble because she has never even seen ratatouille in person, only on television. She catches a break though because Melissa screws up and forgets to turn on her broiler. They both rush through their ratatouille and hope for the best. After a blind taste test, the results are in, and Manouschka Guerrier is the winner.

New England executive chef Michele Ragussis is Melissa’s $15,000.00 challenge. Melissa decides to challenge Michelle to a pork wellington dish and boasts that she has made the dish over thirty times, it’s a family recipe and twist on beef wellington. Michele and Melissa rush around their kitchens for 25 minutes preparing their pork wellingtons, and then it is time for the to turn their dishes over for the blind taste test. Michele Ragussis’s dish is the winner, and Melissa loses the $15,000.00 challenge.

Chef Mike Brown is next up, and Melissa challenges him to create her signature dish, chicken burgers and onion rings. Melissa has been making the dish since middle school and is confident she can beat Mike and win the $20,000.00 prize. They both have twenty minutes to complete their dish, Melissa begins grinding up the chicken and making her burgers and onion rings. Mike decides to spice up his chicken burger and add pepperjack cheese and orange juice. Their time is up and the chefs turn in their plates for the judging, the decision is unanimous and Melissa wins the $20,000.00 prize.

Melissa has one chance to double her money and win a total of $50,000.00. She challenges Chef Jet Tila to her chocolate bacon brownies. They both have twenty minutes to complete their brownies. Jet Tila is scared he isn’t going to be able to bake a brownie in twenty minutes, so he decides to make a skillet brownie. Chef Tila decides to use liquid nitrogen to make bacon ice cream to go alongside with his brownie. Twenty minutes are up and it is time for the brownies to be blind tasted to determine the winner. The results are in, and Melissa is declared the winner, she wins a grand total of $50,000.00.