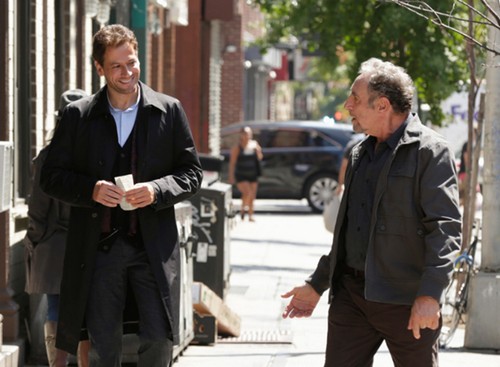 Tonight on ABC their new show Forever airs with an all new Tuesday September 30, season 1 episode 3. On tonight’s episode called, “The Fountain of Youth” Henry and Jo investigate a series of deaths that were caused by an expensive anti-aging potion..

On the last episode after Henry pegged the case of a would-be bridge jumper as a homicide while the police labeled it a suicide, he and Jo went on a rogue investigation for proof. Meanwhile, Henry’s anonymous caller surfaced again. Apparently, he had been tracking him for years. A letter on antique stationary might have provided Henry a fascinating clue about the caller, and he enlisted Abe’s help in tracing the note’s history to a foreign locale. Revealing flashbacks unveil the beginning of Henry’s great love affair with his soon-to-be wife, Abigail. Did you watch last night’s episode? If you missed it we have a full and detailed recap, right here for you.

On tonight’s episode, Henry is interested in aging and how to die, but New York’s wealthy elderly are chasing a way to turn back the clock. A clinic is dispensing a pricey product – Aterna – which is supposed to provide the much sought after fountain of youth. But instead, Henry and Jo are confronted with multiple deaths from the costly potion, which instead of revolutionizing the aging process, is turning people’s brains into swiss cheese. Meanwhile Henry remembers back to dear friend who was diagnosed with tuberculosis in 1906 and discovers a link to this current case. Unbeknownst to Henry, Abe, who would love to be young and youthful again, is tempted to try Aterna. And Henry learns however long you live, you must live every day and hour like it’s your last.

Tonight’s episode is going to be another great episode, which you won’t want to miss. So be sure to tune in for our live coverage of ABC’s Forever Season 1 episode 3 — tonight at 10PM EST!

Tonight’s episode of Forever begins with Henry and Abe, Henry reveals that he made a discovery and he thinks he found a way to die.  Abe doesn’t understand why he would want to give up infinite youth.  He takes Abe down in to the basement and shows him a huge board he has been working on full of his experiments.  Abe refuses to listen he thinks it is ridiculous that Henry doesn’t want his gift.  Henry argues that he doesn’t want to die, he just wants to grow old.

Meanwhile, an old man walks outside in the dark and a thief runs by and steals his briefcase.  He chases down the thief and attacks him and punches him multiple times.  Suddenly the old man begins bleeding out of his nose and keels over and dies.  The burglar picks up his briefcase and runs off.  The man’s body winds up in the morgue and Henry learns that he is a 67 year old named Bill, but he is shocked when he cuts his shirt off him and realizes he has the body of a 30 year old.  Henry realizes that he wasn’t killed by his mugger, his brain gave out on him.  It’s as if he had the brain of a 100 year old.

Bill’s son comes in, and meets with Henry and Detective Martina, they open his briefcase and find a business card for Vital Youth, and $7,000 worth of cash.  His son has no idea why he had the cash, or why he was in China Town, because they live in Jersey.  Henry and Jo head to the scene of the crime where Bill died to try and figure out where he was coming from.  They spot a rich old woman walking near the shop where Bill was, they follow her to a back door and find the same symbol on the door as the one on Bill’s business card.  They head inside and learn it is a doctor’s office selling a supplement that makes you younger called Eterna.

Henry and Jo chat with the doctor that sells Eterna, he insists that their supplement is 100% safe and approved by the FDA.  They want to take a sample to run some tests on it, but the doctor refuses unless they have a warrant.  Henry meets a divorced woman in the lobby and flirts with her and manages to swipe a packet of Eterna to take back to the lab.

Abe finds Henry in the basement analyzing Eterna, Abe jokes that he should try it so he can age as gracefully as Henry.  He warns Abe he shouldn’t take any of it because it is putting holes in the people that take it’s brains.

The next day Henry heads to the office and reveals to Jo that the doctor lied to them about Eterna, he is cutting corners and using cheap substitutes of hormones, and that’s what is causing his patient’s brains to have holes in them.  Jo says that isn’t all that he is lying about, his real name is Harry Price and he changed his name because he was running a fake medical clinic in another state.  They head to Harry;s house to bring him in for questioning and he is having a party.  He heads upstairs to change and they hear him yell.  They rush upstairs and find the doctor laying on the floor in a pool of blood.

Henry does an autopsy on Harry Price and realizes that he had the same holes in his brain as Bill.  He has a flashback to when he was alive in the 1900’s and has an epitome and realizes that pions in tuberculosis cause brains to rot away.  He runs to Jo and reveals that the key ingredient in Eterna is human brains.  They put two and two together and realize there have been a string of missing bodies in NY morgues over the last year.  When an EMT named Anton was bringing in bodies he would distract Lucas with doughnuts and steal their bodies when he wasn’t looking.  Jo rushes to arrest Anton and finds him with one of their bodies in the back of his ambulance, minus their brain.

Jo takes Anton back to the station for questioning, and Anton confesses to killing Harry Price and insists he is the one who has been making Eterna.  Henry asks him a few chemistry questions, which he answers incorrectly.  Henry says there is no way he made Eterna, he must be covering for someone.  They get a list of Eterna’s patients, so they can warn them to stop drinking it, and Henry is shocked when he sees Abe’s name on the list.  He rushes to the shop panicking, but Abe reassures him he never took it.  He met with the “pretty cheist lady” and never followed through.  Henry has him describe the “pretty chemist lady” for a sketch artist, and they realize she is Harry Price’s girlfriend Sasha and Anton’s sister.

Abe heads home and sees Sasha at the train station.  Abe calls Henry and says that he is going to follow her, but when he boards the train, he loses cell phone sevice.  Henry and Jo rush to the train station where they think they are going to get off.  Abe tries to get a cop to arrest her for stealing brains and making shakes, but he thinks Abe is crazy.  Henry and Jo finally arrive and chase after Sasha, Henry catches her and she cries that she didn’t know it was hurting people and says Harry Price was forcing her to keep making it.  She tries to jump in front of a train, but Henry tackles her and saves her.

Later,  Jo finishes up calling all of the Eterna patients, and is shocked that they actually didn’t care about the side effects and want to know when they can get more.  Henry says that he needs to start enjoying life, because NYC is the most exciting place in the world.  He thinks they should both go find someone to share it with.  Jo said she already found someone, but he is gone now.