BY Nicholas Sanford on May 4, 2014 | Comments: 3 comments
Related : Game of Thrones, Recap, Television 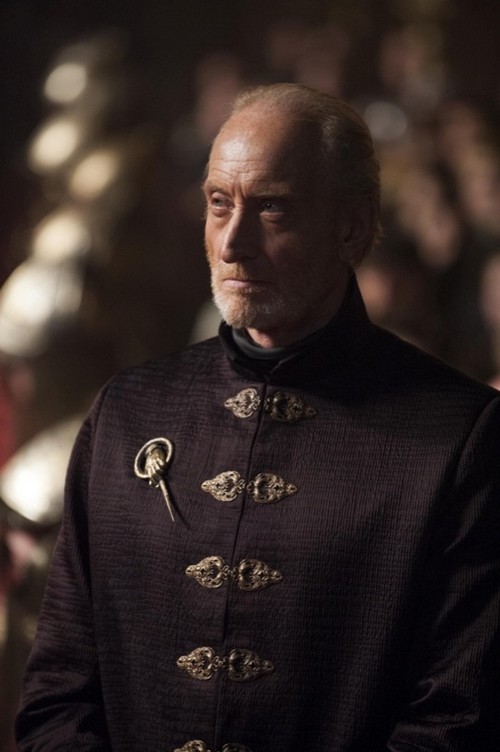 Tonight on HBO, Game of Thrones is back with an all new episode called “First of His Name.” On this evening’s episode, Jon starts a new mission; Cersei and Tywin consider the next move for the Crown; and Daenerys makes plans for the future.

On last week’s episode, Dany balanced justice and mercy and overtook the city of Meereen. Jaime tasked Brienne (Gwendoline Christie) with his honor.  He requested that Brienne find Sansa.  Jon secured volunteers to go with him to Craster’s Keep to avenge Lord Mormont’s death.  Bran, Jojen (Thomas Brodie-Sangster), Meera (Ellie Kendrick) and Hodor (Kristian Nairn) stumbled on shelter.  More happened, too! Did you watch tonight’s show?  We did and we recapped it for you HERE!

The show opens with Tommen’s coronation ceremony. Tommen of House Baratheon is crowned king. Jaime, Cersei, and Lord Tywin all look on with joy. Cersei catches Margaery eyeing Tommen on the throne; she immediately goes over to chat with her. Cersei asks her if she’s still mourning Joffrey’s death, and M says that of course she is. Cersei doesn’t believe her. Cersei says, “You knew exactly what he was” and what he was capable of. Cersei, in this moment, basically admits that her son was a monster — but that she loved him like a mother loves all her children. No matter what.

Cersei says that Tommen could be the first king in over fifty years to actually deserve the throne and that he will ultimately need someone to help him on his journey. Cersei asks M if she’s still willing — and eager — to be queen. M plays coy and says that she’ll have to think about it and talk with her father. (But we all know she REALLY wants to be queen).

Meanwhile, Daenerys learns that King Joffrey has died. She’s also come into a rather large amount of ships and wonders if she now has the power to take over King’s Landing. Jorah councils her in her moment of uncertainty after she learns that all the slaves she freed in the cities she passed through have now been overthrown. She chooses to postpone her journey towards Westeros; instead, she will return and make sure those she freed “do not slip back into chains.”

Lord Baelish and Sansa attempt to pass through the Bloody Gate. They gain entrance and proceed through. Sansa meets with her aunt, Lady Lysa Arryn, to whom Peter is set to marry.

Cersei and Twyin talk about the future weddings to the Tyrells: Cersei will marry Loras and Tommen will marry Margaery. Twyin says that they must solidify their alliance with the Tyrells because the Tyrells are their only true rivals — in terms of resources.

Arya and the Hound try to get to sleep beside a fire; however, Arya is muttering off names — names of the people whom she’s eager to kill.

Lady Lysa meets with Sansa and goes on this weird jealous rage because she thinks Peter’s in love with Sansa — or, rather, thinks he has an attachment to her because he was in love with Catelynn.

Pod and Brienne ride onward to look for Sansa. They bicker back and forth. Brienne wants Pod to leave her alone, but Pod admits that he was ordered to stay by her side. And he’ll continue to do so.

Prince Oberyn and Cersei take a walk through the gardens. Cersei talks about power and asks, “What good is having power when you can’t protect the ones you love?” She asks Prince Oberyn if her daughter (who’s now living in his land) is all right. He informs her that she is.

Brienne and Pod rest beside a campfire. Brienne is apprehensive to let Pod help her remove her armor, but after he reveals that he killed a man during the Battle at Blackwater, Brienne begins to see not only his worth but also his eagerness to serve her. So she gives in and allows him to assist her.

Bran and his buddies are still trapped. The Night’s Watch eventually descends on the camp and overthrows the captors, but the Night’s Watch takes him. Bran is taken away. Luckily, Bran manages to overtake Hodor’s body. Hodor/Bran kills the man who’s taking them away. Bran wants to see his brother, Jon Snow, but Jojen says that he can’t see him — because he will say that he can’t continue on his travels (because he’ll want to protect him).

The Night’s Watch successfully overtakes Craster’s Keep and they burn it to the ground.