BY Amanda Austin on May 22, 2014 | Comments: one comment
Related : Recap, Television 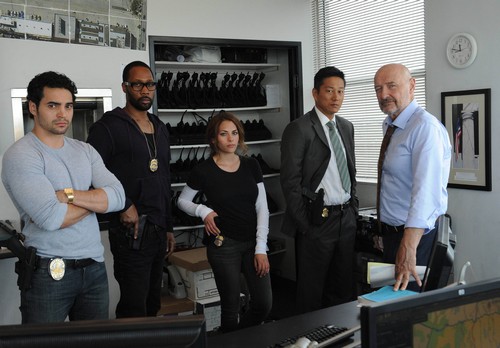 Tonight on FOX a new show called Gang Related premieres with a pilot episode, A member of the LAPD’s Gang Task Force tries to hide his allegiance to the underworld kingpin who secretly put him through the police academy in this drama series. In the premiere, Ryan teams up with a street-savvy veteran cop after his partner is killed by a well-known hoodlum.

The series follows members of the Los Angeles Police Department’s elite Gang Task Force as they take on three of the area’s most dangerous gangs, including one gang that a task member has ties to.

On tonight’s episode Gritty new action-drama GANG RELATED centers on Detective RYAN LOPEZ (Ramon Rodriguez), a rising star in Los Angeles’ elite Gang Task Force who long before he became a cop, pledged allegiance to a different band of brothers – a powerful Latino gang called Los Angelicos. When Ryan’s best friend and police partner is senselessly killed by a notorious gang member, he teams up with longtime Task Force member CASSIUS GREEN (RZA), who has been at the forefront of the city’s war on organized crime. Despite his profession, Ryan is still beholden to the gang’s leader, JAVIER ACOSTA (Cliff Curtis), the father figure he has tried to make proud his entire life and the man who masterminded his entry into the police force. It’s a secret that has been held for a decade by Ryan, Javier and Javier’s sons: cold-blooded gang lieutenant CARLOS (Rey Gallegos); and straight-laced investment banker DANIEL (Jay Hernandez), Ryan’s childhood best friend. But Ryan is starting to realize that he might be more dedicated to being a cop than he is to Los Angelicos. He is respected by his team, including TAE KIM (Sung Kang), VERONICA “VEE” DOTSEN (Inbar Lavi) and Task Force leader SAM CHAPEL (Terry O’Quinn), Ryan’s other surrogate father figure, whose estranged daughter, JESSICA (Shantel VanSanten), is the city’s Assistant District Attorney

Tonight you don’t want to miss the premiere of Gang Related, so be sure to tune in at 9 Pm EST on FOX and we’ll be recapping it right here for you but in the meantime, hit up the comments and let us know your thoughts on the show.

Tonight’s series premiere of Gang Related begins with a flashback to Los Angeles during 1998 and a 4th of July party. Ryan steals a 40 and tries to drink with his friend Daniel. A gangbanger named Carlos tells Ryan to get off his turf and steals Ryan’s watch, which was his dead father’s. Carlos and his friends break Ryan’s arm. Javier comes and sends everyone away. He gives Ryan his watch back and tells him that he knew his father and he admires his strength. He tells Ryan he “could use someone like him.”

Present day – Ryan is a LAPD officer and he and his partner Tanner are in pursuit of an armored truck that was stolen. They can’t shoot the tire out, so Tanner sticks a small bomb to the armored truck and take it down. They head back to the station and are greeted with a standing ovation by the rest of the force.

Their boss briefs them on a new type of cocaine coming in to LA called “Fish Scale.” The Long Beach Lords are trying to establish a Fish Scale pipeline in to LA. Javier Acosta, another crime lord wants the pipe line for himself. There is about to be a full-blown gang war in LA over the Fish Scale pipeline.

Tanner and Ryan head out for drinks after work. When they leave the bar Tanner is drunk and sees a kid tagging the side of a building. They chase him into an abandoned building, it’s dark and Ryan can’t find Tanner. He finds two dead bodies on the floor and calls for back-up. He finds Tanner shot and dying on the floor. Carlos comes out of the shadows and laughs as Tanner dies in Ryan’s arms. Ryan pulls his gun on Carlos, and Carlos tells him “to get his head on straight and remember whose side he is on.” He reminds Ryan of everything his father Javier has done for him and shoots him in the arm to make it look like Ryan tried to take him in.

Ryan gets patched up at the hospital and his Captain comes to check on him. He is a mess over his partner’s death. Captain tells him to go home and rest and tomorrow he will help him finds Tanner’s killer.

DEA Jess shows up and wants to question Ryan. Captain (who is also her father) won’t let her in his hospital room, and she says “sometimes you can be a real prick Dad.”

Ryan heads home and hops on his motorcycle and leaves again. He heads to a club where Javier is meeting in the back with his sons Daniel and Carlos and barges in. He attacks Carlos, and Javier kicks Carlos and Daniel out. He apologizes for what Carlos did and reassures Ryan that it was an accident. Ryan informs him that “last night was wrong and he didn’t sign on to watch innocent people die.” Javier assures him that between his property investments and Daniel’s bank, the family will be going clean and legit very soon-he just needs to hang in there a little longer.

Captain calls a meeting at the force, he has a game plan. He wants to go after the gang members wives and children and put the people that the leaders care about behind bars. He orders them to “stop the fish scale deal and find out who killed Tanner.” He has a diagram up of all of Javier’s family.

Afterwards Ryan meets up with Daniel, he warns them that the task force is going after everyone in the family, including him. Daniel argues that he is clean, but Ryan informs him it doesn’t matter.

Ryan and Cassius head out on the streets and corner a known drug dealer named Lucas and question him about Fish Scale. Tae heads to Korea Town to try to dig up some info on Tanner’s shooter since he was shot in Korea Town. He gets an address for the witness of the shooting, the kid that Tanner saw tagging the building. The tagger gets tasered and rats out Carlos in a heartbeat.

Meanwhile, Ryan is at a cookout at Javier’s house and he runs into his ex-girlfriend Sylvia, who is now Daniel’s girlfriend. Right in front of Ryan, Daniel gets down on one knee and proposes to Sylvia, she says “yes.”

Ryan leaves and Javier heads into his basement. He has a member of the Lords tied up in the basement and they are torturing him to get him to tell them where the shipment of Fish Scale is.

Ryan shows up at the office and everyone is suited up in bulletproof vests. He learns that they have ID’d Carlos as a shooter and they are making a move on him. Ryan goes with the task force as they arrest Carlos. Carlos whispers to him that the gun is hidden in the bible. Ryan rushes back into the apartment and hides the gun, but the rest of his team frame Carlos and plant a bag of Fish Scale in his apartment.

Carlos gives up the Fish Scale deal so that he can avoid going to jail for the drugs they planted in his apartment. Ryan and the task force head out to the desert to bust the Lords’ Fish Scale deal. They manage to take down the entire operation.

DEA Jessica Chappell is heading to her car when an Internal Affairs officer stops her, and wants to know if she spoke to Ryan yet. He is suspicious because he checked out the crime scene and Ryan never returned any fire.

Meanwhile Ryan heads home and receives an inspirational voicemail from Javier telling him how great of a job he did the last few days and how proud he is of him and everything he has done for the family.

Ryan texts Lucas and tells him that Carlos is the one who shot his friends at the warehouse where Tanner was killed. He sits in a parking lot and watches Lucas and his friends assassinate Carlos.