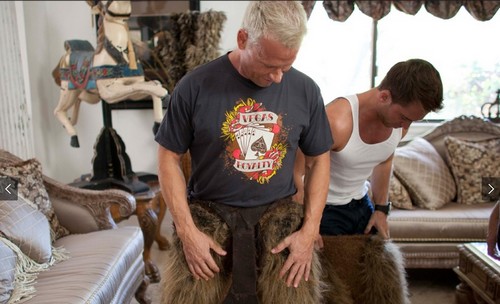 Tonight on Showtime their reality show GIGOLOS continues with another new episode.  If you have never watched the show Showtime presents an extremely rare and uncensored look into the personal and professional lives of five hot guys in Vegas who like to hang out, have fun and get girls, but in their case they get paid for it.

They find themselves in some unexpected positions as they balance relationships, friends and family with the demands of their female clientele. A reality series like no other, Gigolos is not only provocative but also surprisingly heartfelt. It’s a wild ride for these real-life escorts who never miss a trick.

On tonight’s episode of Gigolos – Nick is a workout fanatic and his body is in top form…which is what the ladies love about him.  A former physical trainer, his client on tonight’s episode recently lost 100 lbs, and Nick  is her fantasy man. After a good workout, the 50-year old takes her trainer home for a little more “working out.”

Vin, the self-described “feminist” entertains a medical student who is visiting Vegas to get out and have some fun. A homebody, she explains that she hired a gigolo for the first time because she never gets hit on. After a couple drinks to unwind, Vin offer s afoot massage and is relieved that she has nice feet.  After he proposes they move to the bedroom, she enjoys being taken care of in all the right ways.  She vows that she will most definitely hire a gigolo again.

Brace embraces the opportunity to fulfill a client’s fetish for all things renaissance. As he tells his fellow gigolos about his plan to become a centaur, Vin giggles to himself knowing that Brace is looking in the wrong century for a hot costume. Unknowingly, Brace moves forward with making the costume and talks Bradley, being the new guy, into being the back-end of the half-man, half-horse mythological character. When his client arrives, Brace offers her a true renaissance costume for herself to get in the mood. He asks her to wait outside for him to get ready. He excitedly walks in, in his full-centaur costume and proudly stands in front of his Software-tester client. As Brace asks her if his costume is renaissance enough for her, she laughs and explains that his costume has nothing to do with the renaissance. Unfazed, Brace brushes off his brief embarrassment by stating, “Well, that is why she hired a gigolo, and not a historian.” The formerly-conservative client, allowed her new desire to experiment take over as she enjoyed her mythological creature in a big way. Poor Bradley, hot in the back of the suit, earned his stripes by remaining in the costume the entire time!! Wonder how much HE got paid!

A client-free Ash shares his concern with his sexy colleagues, about being extremely tired lately. He explains that he has been waking up feeling sick and heavy. He decides he need to find out what is wrong and visits a sleep center for testing since his sleeping patterns are way off. The doctor recommends not drinking so much and thinks that may impacting his sleep. Ash works to get centered and become one with his body to help, as giving up alcohol is not really in the cards for any of these men!

Be sure to visit our recap next week and peek in on the lives of true gigolos in Vegas and the clients who are willing to pay for their “services.”