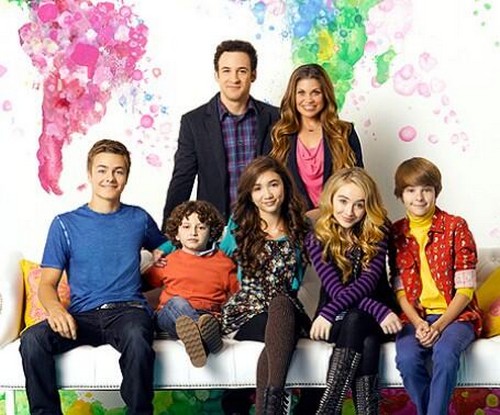 The iconic 90’s TV show Boy Meets World is a childhood memory for any kid that grew up during the 90’s.  So, you can imagine how pumped I am that the Disney spin-off titled GIRL MEETS WORLD is premiering tonight.  Deep breaths everyone…

Girl Meets World will follow the life of 7th grader Riley Matthews, the daughter of Boy Meets World’s high-school sweethearts Cory and Topanga Matthews, who are now married and living in New York City.  Spy Kids alum Rowan Blanchard has been cast as Riley, ad her parents Cory and Topanga will be played by the original cast members Danielle Fishel and Ben Savage.  Other Boy Meets World cast members, including Rider Strong, Betsy Randall, William Russ, and William Daniels, have all been slated to appear in at least one episode of Girl Meets World this summer.

On tonight’s episode when Maya leads a rebellion in class, Riley joins in to try to be like her – much to her father, Cory’s, dismay.  Guest starring: William Daniels as Mr. Feeney and Jackie Harry as the woman on the subway.

Girl Meets World will be airing tonight at 10:45 PM on the Disney Channel and Celeb Dirty Laundry will be covering all the happenings for your enjoyment.  So make sure to bookmark this page and come back later for our recap.  So 90’s kids, on a scale of 1-10 how pumped are you for tonight’s premiere?

Riley and Maya try to sneak out to the subway but Cory busts them on the fire escape. He tells them they didn’t put anything over on him. Riley asks how long she has to live in her dad’s world and he says – until you make it yours. She asks if her parents will still be there when she does and Topanga comes in and reassures her. In the subway, Weasel plays bucket drums and Maya introduces Riley to him – she’s thrilled when he calls her chick.

Riley puts on lip gloss and tells Maya she’s all new and improved but then geeks out when a cute boy smiles at her. Maya tells her to watch her work. Maya comes over to him, tells him he’s cute, they should hang, then that he doesn’t get her and that it’s over. He’s stunned as she walks off. Maya tells Riley he’s available since they just broke up and shoves her across the car into Lucas’ lap.

An older woman, Estelle, asks Riley to give up her seat beside Lucas since she’s tired from a long shift at work. She does and goes back glumly to Maya. She complains she’ll never get a chance like that again and Maya gives her another shove. This time she lands in Estelle’s lap who turns to look and says – it’s for you.

At school, Maya tells Riley she didn’t know do her homework and has no clue about where her books are. Riley says she has to do her homework because this teacher is crazy. Turns out, it’s her dad who’s teaching it. He tells Riley she’s late and Maya says it’s okay because he wrote her a note. She pulls out a note she forged and he says she’s done well with his signature.

Cory tries to teach about the Civil War but it’s going nowhere. Farkle interrupts and says he’s in love with both Maya and Riley he can’t decide between them. Riley says she thought he’d end up with back of the class Brenda. She smiles at him and he shudders. Cory asks how he can like two girls so different. He stands up and explains they are like light and dark, sun and moon. Cory tries to come back to the Civil War.

He asks who he is and what he should be. He says bad things happen when you don’t know who you are. The door opens and Maya says it’s subway boy – Lucas is a new student. Riley smiles at him as he sits and her dad turns her head back around. He asks them to turn to page 48 then to page 1 then to read from one to the other. They groan and he says too bad.

Cory tells them to write a three page essay about anything they feel strongly enough about to fight for. Maya says she would fight for no homework. She starts the class chanting no homework, more freedom. She tells Riley to stand up and she does. Cory asks what she’s doing and she says she’s making a choice about her world. He says he knows who she is and says she’s just like him.

She joins in the chanting and tells Farkle to join them. He goes to Cory and says he has to choose between his education and his women. He goes back and forth a few times, can’t take the pressure and faints in Cory’s arms. After school, Cory and Riley come in complaining about each other. She says her teacher followed home and asks if they can’t keep him. Cory says she wants to be like Maya and she asks why. She tells her parents they don’t know her at all.

Topanga mocks Cory and says – you said let’s get married, let’s have a kid, let’s have another kid. He says she was stupid to listen to her. Riley and Auggie sit and talk about their problems. He says they think alike because they’re twins. She tells him they’re not and he runs off crying to his mom.

At school, Maya and Riley slide apart to leave a spot for Lucas but Farkle cuts him off and plops down. He flirts then gets up and leaves. Maya tells Riley to invite Lucas over. They’re rehearsing what she’ll say when he sits down unasked. Riley is freaking out but then her dad is there. She says it’s innocent and he says no dad sees it that way. She begs him not to embarrass her. He does anyway.

He hauls Lucas’ chair with him in it away from his daughter’s table. Riley asks if Maya did the homework and she says no. Riley admits she did her homework and Maya’s and Maya says not to save her. She tells Riley to let her be her. Back in class, Riley talks to Lucas and her dad runs over and embarrasses her again. He says he’s a good looking kid and is annoyed.

Cory says today they will find out if anyone believes in something strong enough they’re ready to fight for it. He asks Maya first and she says she didn’t do her homework because that’s what she’s fighting for. Riley says she didn’t do it either. He’s not pleased. Maya stands up and says that everyone who did their homework should put it on their desk. She collects the essays. Farkle comes in with a diorama with sparklers.

Maya holds the homework up and starts to light it with a sparkler. Cory says that’s enough and snatches the papers away. But she sets off the sprinklers with the sparkler and everyone gets soaked. Lucas asks Riley why she didn’t stop him and Riley tells him that she’s letting her be her but Lucas says she’s better than that. Cory tells Maya she has detention and Riley says she deserves it too. He says she didn’t do anything so she doesn’t get detention and that means that Maya got detention, because she didn’t do anything.

With the sirens blaring and the sprinklers spraying water everywhere, Farkle climbs up on Cory in a panic and gets up on his shoulders. He tells Cory he’s comfortable and Cory yells at Farkle to get off of him. He says – Farkle’s not going anywhere. The girls watch Cory carry Farkle out of the class and tells him down. Farkle hops down.

Cory tells Riley that she was so busy trying to be Maya that she forgot that the best thing for Maya is for Riley to be herself. He tells Riley to take Farkle for a walk. Cory tells Maya that friends should help each other out of trouble, not into it. He asks her what’s the deal and she says that she has no one at home to help her with her homework. She walks away, ashamed and Cory is stunned.

On the subway, the girls stand quiet. Maya finally says if they can’t hang out as much, not to worry about it. She says that she thinks Cory will make them stop hanging out but Riley says her dad loves her and Maya says not so much. Estelle is there watching them and inserts herself into the conversation. She tells them best friends are important and she has one but says they aren’t talking right now.

Maya says that Cory is going to tell her that she’s bad for her and tells her to get off at her stop. Riley doesn’t want to go but Maya pushes her off. Estelle tells Maya you never push your BFF of the train. Riley reopens the doors and says she won’t let it end. Maya says she’s not good for her. Riley says it’s her world and the first person she wants in it is her. Maya asks if she’s going to try and save her.

Next day on the subway, Cory has his family there and says they are celebrating Riley being Riley. He hands her a subway pass and says it’s her ticket to the world. Cory says he’s already met the world and says it’s her turn. Lucas tells Farkle New York isn’t so different than Texas and says there’s a pony. Farkle says that’s a rat and Lucas is horrified.

The girls set off on a little trip and her parents are there when she gets back. Topanga says they told her they would always be there for her. Cory looks back and sees Mr Feeny there and he says – well done